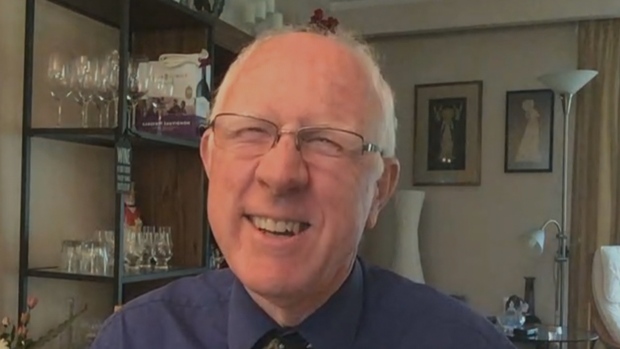 Paul Delaney, longtime York University professor of astronomy, is retiring from full-time teaching but says he has no plans to retire from astronomy.

Delaney, a frequent contributor to CTV News, has been teaching undergraduate and graduate students at the university since 1986.

He was also director of the university’s Allan I Carswell Astronomical Observatory (AICO) for 30 years, stepping down in June of this year before his retirement on December 31.

Delaney said astronomy was a part of his life “from an early age” that he can remember.

“And it’s not about to stop anytime soon,” he told CTVNews.ca in a phone interview.

There are “always interesting astronomical events looming on the horizon,” Delaney said. But the good thing about astronomy, he continued, is that it “doesn’t have to be a personal matter.”

“It can be done in a group,” he said. “My wife and I have pursued many different astronomical phenomena over the years – and that is not going to change.”

What will change, said Delaney, is the time he will have free to travel to see some of these phenomena.

Here are some events Delaney says he plans to get up early for, or that he will travel to see, even after he retires.

First, Delaney said he and his wife were planning to “reconnect” with the Northern Lights.

“The Northern Lights are a magnificent phenomenon,” he said. “The one we were fortunate to witness when we lived in Manitoba. “

But, Delaney said he and his wife lived in lower latitudes in Ontario.

“And the auroras just don’t descend to latitudes like Toronto,” he said, adding that he was planning a trip to Norway “very soon”.

“We hope for February,” he said. “But stay tuned because of the pandemic.”

Next are total solar eclipses, a phenomenon Delaney said he’s been fortunate enough to see three times over the years.

“They [are] still happening every year somewhere on the planet, ”he said, pointing to the one that happened on December 4, visible in Antarctica and parts of the southern hemisphere.

Delaney said a total solar eclipse will be visible over most of southern Ontario in April 2024.

He said the entirety line starts at Niagara Falls, narrowly misses Toronto, but then hits just above Montreal. This means that for Torontonians, it will only take a few hours of driving to “find themselves in the line of totality”.

“So the pursuit of total solar eclipses is also high on our list,” Delaney said.

Plus, said Delaney, “Lunar eclipses are always a beautiful sight.”

“These kinds of events, in general, you don’t have to travel too far,” he said. “But you might have to get up around 4 a.m. to see the peak of the lunar eclipse.”

Another thing Delaney said he would make an effort to see is “very nice meteor showers.”

“Some meteor showers occur with greater intensity than others, depending on the celestial arrangement,” he explained.

Delaney said that if you are somewhere with dark skies, you can witness meteor showers in their “greatest extent.”

“With southern Ontario being so bright, you tend not to be able to see as much of the event as you would like,” he explained. “So going a distance, getting up after midnight and so on, these are the kinds of things that maximize the opportunities for the bigger show. “

He said he was “all for that” since he would no longer have to get up early to teach.

Delaney said he would also make an effort to see bright comets.

“Every comet is a little different,” he said. “There isn’t a really bright comet on the horizon right now, but that doesn’t stop comets from sneaking up on you. There are things that happen unexpectedly and you have to be flexible enough to hop in the car, jump on a plane, or get up early to see this stuff.

While there isn’t much that Delaney hasn’t seen in his career, he said he looks forward to having “bigger opportunities” and more time to hunt. some of these phenomena.

Delaney said he plans to continue going to the observatory with his students “as much as possible.”

“It’s nice to be able to have these kinds of opportunities with little responsibility,” he said with a laugh. “When something breaks, I now know that I don’t have to fix it. “

“I can be with my students and we can enjoy the night sky together,” he continued. “So it’s really very, very satisfying. ”