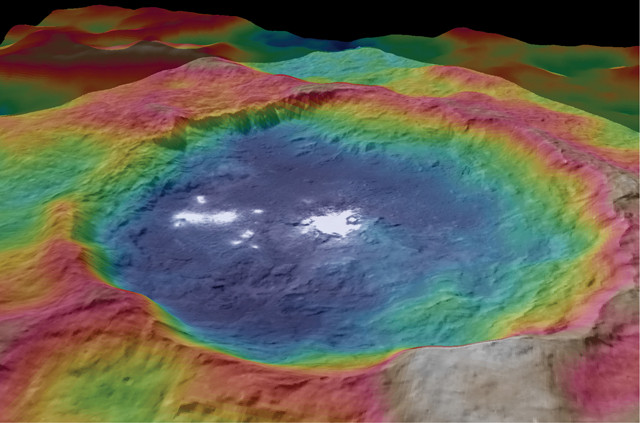 A bright spot in the asteroid belt

Ceres: a bright spot in the asteroid belt

Orbiting the asteroid belt between Mars and Jupiter, Ceres is the closest dwarf planet to Earth and the only one in the inner solar system. It has been studied closely by NASA’s Dawn spacecraft since March 2015.

Now in the second expansion of her mission, Dawn has provided a stream of data, some of which surprised researchers. In particular, more than 300 light spots on the surface of Ceres may suggest ongoing geological activity, said Carol Raymond, small body program manager at NASA’s Jet Propulsion Laboratory at Caltech. Raymond made the announcement during a press conference on Dawn’s recent findings at the American Geophysical Union’s fall meeting in New Orleans last December.

The bright spots are associated with sodium carbonate, a mineral found in hydrothermal deposits on Earth and also in plumes ejected from Saturn’s moon Enceladus, Raymond said. “We now know that this shiny material reveals evidence of the underground ocean and the geological processes that brought it to the surface.”

Scientists mainly focused on the 92-kilometer-wide Occator Crater of Ceres, as at its center it is home to the brightest elements, which have been named Cerealia Facula. The more diffuse spots nearby are called Vinalia Faculae.

Occator is a relatively young crater, believed to have formed around 34 million years ago, and the shiny deposits it contains are even younger, at 4 million years old. The detailed surface maps produced during the first expansion of Dawn’s mission show that the brightest spots are in the deepest part of Occator. The fracture lines on the crater walls and floor suggest a plug of underground material pushing towards the surface. The central light spot is topped by a dome, which is also marked by recent fractures, she said.

Ceres has bright spots all over its surface, Caltech’s Nathan Stein said at the press conference. Although brightness is a relative term, he pointed out. “The brightest point on the surface actually has an albedo of between 0.4 and 0.5 [similar to ice on Earth]. On average, most [of Ceres’] surface light spots are closer to 0.08 which is a bit brighter than charcoal [0.04]. “

Most of the bright spots are associated with impact craters, which is no coincidence, Stein said, and they are young geological features, ranging in age from several hundred thousand years, or less, several hundred million years ago. The light points were assigned to four classes based on the associated geological features. Some, like Cerealia Facula, the brightest, lie at the bottom of craters. Bright spots have been identified at the bottom of eight craters. The majority, however, are found on the edges or walls of craters, and they usually extend to the bottom of the crater. Another class is found on the crater ejecta, and a single example has been found high on a mountain 4,000 to 5,000 meters above sea level.

The formation of light spots requires the presence of liquid brine, and the young age of some light spots suggests that liquid brines may exist in the basement today. â€œCeres is not a corpse,â€ as it was once assumed, said Stein. â€œThe surface is always dynamic.

The subterranean brines could have reached the surface and formed the carbonate-rich bright spots via temperature-induced pressure changes or the impact at depth, reported Lynnae Quick, a geologist at the Smithsonian Center for Earth and Planetary Studies and a member of the Dawn. scientific team, during the press conference. Freezing the brine over time could have caused it to expand and reach the surface through fractures. Or the impact that formed Occator could have “crushed and pinched” the brine reservoirs, also forcing them to rise to the surface via fractures, she said. The brine, she said, could have risen to the surface under heavy pressure – squirting like soda from a can that had been shaken and then opened. In the near-zero pressure space above the crater, this “fountain” sagged and brine collected in a dome shape in the center of the crater.

Mount St. Helens could be an Occator analogue, Quick said. Since its catastrophic eruption in 1980, it has rebuilt itself and now has several domes in its remaining crater. These were also formed by a high viscosity liquid – lava in this case – forced to the surface, carrying particles of ash and rock instead of Occator vapor, salt particles and crystals. of ice.

Oddly, Quick said, processes that took place on Ceres in the past may still be active on the moons of outer planets, such as Saturn’s Enceladus and Jupiter’s Europa.

During her current mission, Dawn will dive into an elliptical orbit lower than it was before, to an altitude of just 30 kilometers, to obtain more precise data on surface chemistry and high-resolution images. unprecedented specific characteristics, said Raymond. Unlike some other exploration spaceships, Dawn will not crash into the surface of Ceres once its useful life has ended, which could arrive as early as April 2018. To avoid contaminating the dwarf planet, it will remain in orbit around it. of Ceres permanently.

If “Starman” isn’t heading for the asteroid belt, where is this dummy going?

The wreckage of some ancient planets formed the asteroid belt