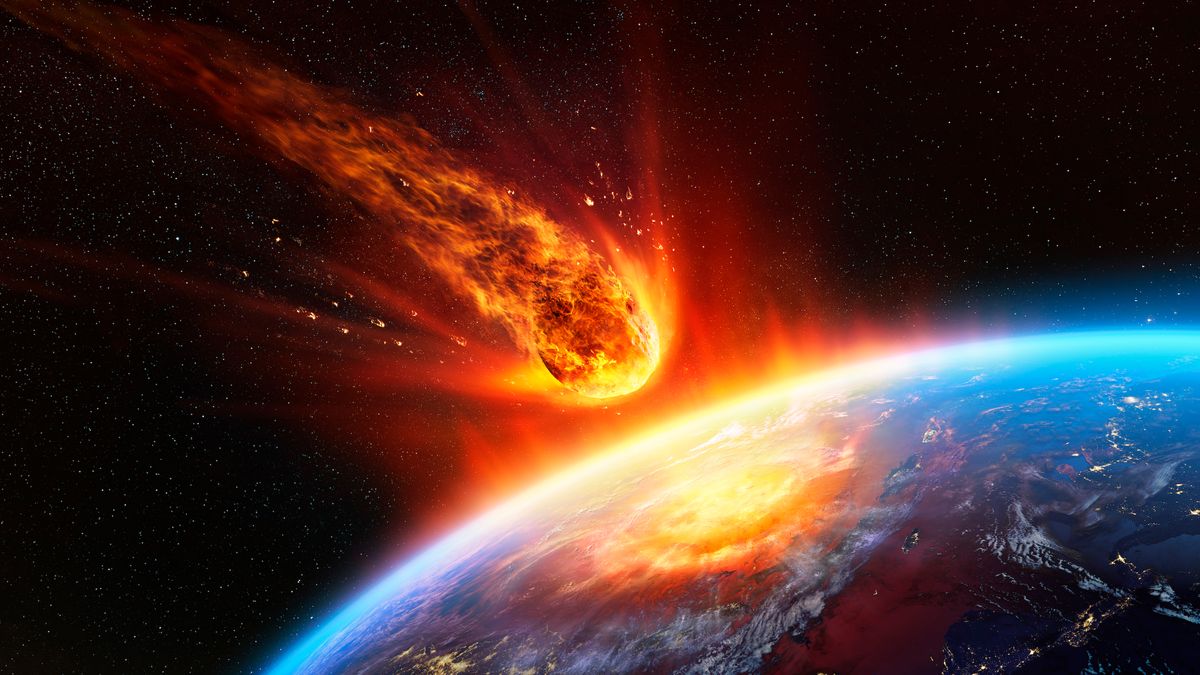 A “planet killer” asteroid lurking in the sun’s glare has finally been detected, and the giant space rock could one day crash into Earth.

The ‘potentially dangerous’ 0.9-mile-wide (1.5 kilometer) asteroid, named 2022 AP7, is one of many large space rocks that astronomers have recently discovered near the orbits of Earth and Venus.

Currently, 2022 AP7 crosses Earth’s orbit while our planet is on the other side of the Sun, but scientists say that over thousands of years, the asteroid and Earth will slowly begin to pass through the same point closer to each other, increasing the chances of a catastrophic impact. The asteroid, discovered alongside two other near-Earth asteroids using the Cerro Tololo Inter-American Observatory in Chile, was described in a study published September 29 in The Astronomical Journal.

Related: Why do asteroids and comets have such strange shapes?

“So far we have found two large near-Earth asteroids [NEAs] which are about 1 km [0.6 mile] across, a size we call planet killers,” study lead author Scott Shepardastronomer at the Carnegie Institution for Science in Washington, DC, said in a press release. “Planet killer” asteroids are space rocks large enough to cause a global mass extinction if they were to crash into Earth.

To find the asteroids, astronomers trained the Cerro Tololo Víctor M. Blanco telescope’s 4-meter dark energy camera on the inner solar system. Glare from the sun makes observations impossible for most of the day, so the researchers only had two 10-minute sunset windows each night to make their observations.

“Only about 25 asteroids with orbits completely inside Earth’s orbit have been discovered so far due to the difficulty of observing near the Sun’s glare,” Sheppard said. “There are probably only a few NEAs of similar sizes left to be found, and these large undiscovered asteroids likely have orbits that keep them within the orbits of Earth and Venus most of the time.”

NASA tracks the locations and orbits of about 28,000 asteroids, tracking them with the Asteroid Terrestrial-impact Last Alert System (ATLAS), a set of four telescopes capable of scanning the entire night sky every 24 hours. The space agency flags any space object that is within 120 million miles (193 million km) of Earth as a “Near-Earth object” and classifies any large body within 4.65 million miles (7, 5 million km) from our planet as “potentially dangerous”. “

Since going live in 2017, ATLAS has spotted more than 700 near-Earth asteroids and 66 comets. Two of the asteroids detected by ATLAS, 2019 MO and 2018 LA, actually hit Earth, with the first exploding off the southern coast of Puerto Rico and the second crashing near the Botswana-South Africa border. South. Fortunately, these asteroids were small and caused no damage.

NASA has estimated the trajectories of all near-Earth objects beyond the end of the century. Earth faces no known danger of an apocalyptic asteroid collision for at least the next 100 years, according to NASA. But that doesn’t mean astronomers think they should stop looking. In March 2021, for example, a bowling ball-sized meteor exploded over Vermont with the force of 440 pounds (200 kilograms) of TNT. Even more dramatic, the 2013 meteor explosion over Chelyabinsk, Russia generated a blast roughly equal to about 400-500 kilotons of TNT, or 26-33 times the energy released by the Hiroshima bomb, and injured about 1,500 people.

Space agencies around the world are already working on possible ways to deflect a dangerous asteroid should one ever head our way. On September 26, the Double Asteroid Redirection Test (DART) spacecraft redirected the nonhazardous asteroid Dimorphos off course, altering the asteroid’s orbit by 32 minutes in the first test of the planetary defense system. of the earth.

China also suggested it was in the early stages of planning an asteroid redirecting mission. By launching 23 Long March 5 rockets at asteroid Bennu, which will hover within 4.6 million miles (7.4 million km) of Earth’s orbit between the years 2175 and 2199, the country hopes to divert the rock space of a potentially catastrophic impact with our planet. .

The sky this week from November 4 to 11