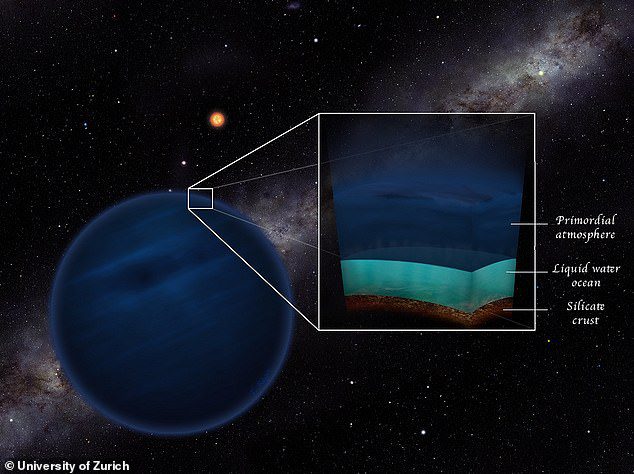 A new study has found that “super-planets” outside our solar system that are rich in hydrogen or helium may be more habitable than our own.

The presence of liquid water is “fit for life”, so these planets could provide habitable conditions and exotic habitats for perhaps up to 8 billion years.

Rocky exoplanets – planets outside our solar system – with primordial atmospheres dominated by hydrogen and helium have surfaces hot enough to host liquid water, the researchers say.

The new study was conducted by researchers at the University of Zurich in Switzerland and was published today in the journal Natural Astronomy.

An exoplanet is any planet outside our solar system. Most stars orbit other stars, but free-floating exoplanets, called rogue planets, orbit the center of the galaxy and are not tied to any star.

Meanwhile, the super-Earth is an exoplanet with a mass greater than that of our planet.

Super-Earths can be made of gas, rock, or both.

They say these planets probably don’t look much like our home planet and could harbor organisms under very high pressures.

“Life on the type of planet described in this work would survive under significantly different conditions from most life on Earth,” the authors state.

Surface pressures in our results range from 100 to 1000 bar, which is the pressure range for ocean floors and trenches.

“There is no theoretical limit to the pressure on life, and some of the most extreme examples in Earth’s biosphere thrive at around 500 bar.”

Billions of years ago, the early universe contained only hydrogen and helium, as well as gases, which were readily available in the building materials of planets around young stars, such as our sun.

Therefore, all planets have formed atmospheres dominated by these two elements, including the Earth.

“When the planet first formed from cosmic gas and dust, it took in an atmosphere of mostly hydrogen and helium – the so-called primordial atmosphere,” the author said. Ravit Heald study from the University of Zurich.

However, during their evolution, the rocky planets, including the Earth, lost this primordial atmosphere in favor of heavier elements, such as oxygen and nitrogen.

When our planet first formed from cosmic gas and dust, it gathered an atmosphere composed mainly of hydrogen and helium – the so-called primordial atmosphere.

However, other more massive planets can accumulate much larger primordial atmospheres, which can contain them indefinitely in some cases.

“Such massive primordial atmospheres can also cause a global warming effect – much like Earth’s atmosphere today,” Held said.

So we wanted to see if these atmospheres could help create the conditions necessary for liquid water.

For the study, the team modeled nearly 5,000 exoplanets, some bound to its star and others free-floating, and simulated their evolution over billions of years.

The researchers took into account not only the properties of the atmospheres of the planets, but also the intensity of the radiation of their stars as well as the internal heat of the planets radiating outwards.

Although this geothermal temperature is present on Earth, it plays only a secondary role to conditions on the surface, and may contribute even more to planets with massive primordial atmospheres.

An exoplanet is any planet outside our solar system. Most stars orbit other stars, but floating exoplanets, called rogue planets, orbit the center of the galaxy and are not tied to any star (file photo)

The results suggest that depending on a planet’s mass and its distance from its star, these planets can maintain a moderate surface environment for up to 8 billion years, provided the atmosphere is sufficiently thick – 100 to 1000 times thicker than Earth.

“What we found was that in many cases the primordial atmosphere was lost due to the intense radiation from stars, especially on planets close to their star,” said Marit Mole Los, PhD student and main author.

“But in cases where atmospheres remain, the right conditions for liquid water may occur.”

“In cases where sufficient geothermal heat reaches the surface, radiation from a star like the Sun is not necessary until conditions at the surface prevail and allow liquid water to exist.”

“Perhaps most importantly, our results show that these conditions can persist for very long periods of time – up to tens of billions of years.”

Researchers say instruments such as the James Webb Space Telescope, currently in space, and the Very Large Telescope, under development, should tell more about the vital signs in the atmospheres of exoplanets.

NASA Confirms There Are Over 5,000 Planets Outside Our Solar System

NASA has confirmed that there are over 5,000 known planets outside our solar system, called exoplanets.

The US space agency has added 65 more exoplanets to NASA’s Exoplanet Archive on the Internet, bringing the total to 5,009 as of April 1, 2022.

This number was 5,005 on March 22, indicating that four planets were added to the total in just 10 days.

The database showed that as of June 8, there were 5,044 exoplanets.

The more than 5,000 confirmed exoplanets in our galaxy so far include a variety of species – including a mysterious group known as “super-Earths” because they’re larger than our world and possibly rocky

However, NASA claims that only a “small portion” of all planets have been found in the Milky Way alone.

The majority of the outer planets are gaseous, like Jupiter or Neptune, and not terrestrial, according to NASA’s online database.

Most exoplanets are found by measuring the opacity of a star in front of which a planet passes, called the transit method.

Another method of detecting exoplanets, called the Doppler method, measures the “oscillations” of stars due to the gravitational force of orbiting planets.

The most interesting moons of our solar system