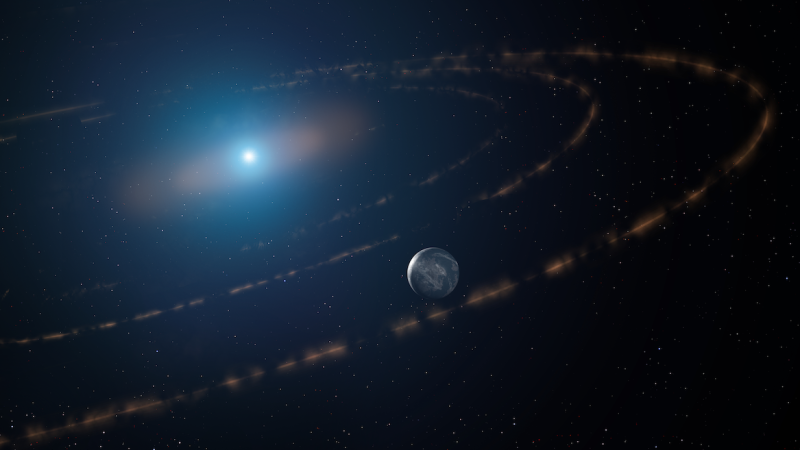 Planetary debris, including some moon-sized objects, may hint at a rocky exoplanet in a stellar zombie’s habitable zone, according to a new study.

The star in question is a white dwarf called WD1054-226, a cooling remnant of a star that has used up all the fuel in its core. If an exoplanet is confirmed in the system, it would be a breakthrough for white dwarf science, the researchers noted in a statement. Only one other planet has been discovered to date orbiting a white dwarf. This planet, however, is a gas giant, a planet similar to Jupiter, and not near the habitable zone (generally defined as where liquid water can exist on the surface of a rocky planet).

“The possibility of a major planet in the habitable zone is exciting and also unexpected; we weren’t looking for this,” Jay Farihi, an astrophysicist at University College London and lead author of the study, said in a statement.

Fahiri warned that confirming the planet’s existence with current technology will not be straightforward. “Confirmation can come by comparing computer models with other observations of the star and orbiting debris,” he said.

Related: The first discovery of a planet orbiting a dead star gives a glimpse of the future of our solar system

WD1054–226, just 117 light-years from Earth, is close enough to be directly observed by many telescopes.

Researchers have realized that a planet could be orbiting the white dwarf from “sharp dips in light” detected by the European Southern Observatory’s 3.5-metre new-tech telescope at the La Silla in Chile. Additional observations with NASA’s planet-hunting space telescope, the Transiting Exoplanet Survey Satellite (TESS), have provided insight into why these changes in brightness may be occurring.

Dips in brightness from WD1054–226 correspond to 65 “equidistant” clouds of planetary debris circling the star every 25 hours, the data suggests. The even distribution of debris in space suggests that a terrestrial planet (similar in size to Earth) could hold everything in place.

White dwarfs provide a glimpse of what will happen in our own solar system when the sun runs out of hydrogen in about five billion years. Before collapsing into disappointing white dwarfs, stars go through the so-called red giant phase. expand 100 to 1000 times and burn the planets closest to them. When the sun turns into a red giant, life on Earth will no longer be possible. Temporarily, the habitable zone will shift into the outer solar system, before shrinking again to include only the closest surroundings of the cooing white dwarf.

The theoretical planet at WD1054–226 is well within the white dwarf’s habitable region. It orbits at a distance of 1.6 million miles (2.5 million kilometers) from the parent star, about 28 times closer than Mercury is to the sun.

More intriguingly, all of the debris and the possible planet must have formed or somehow arrived in the area after the red giant collapsed into the white dwarf. This is because the material is so close that it would have been devoured by the red giant.

“This orbit around the white dwarf is expected to have been cleared during the giant star phase of its life, and therefore any planet that could potentially host water and therefore life, would be a recent development. “, adds the press release. “The area would be habitable for at least two billion years, including at least a billion years in the future.”

An article based on the research was published Feb. 8 in the Monthly Notices of the Royal Astronomical Society.