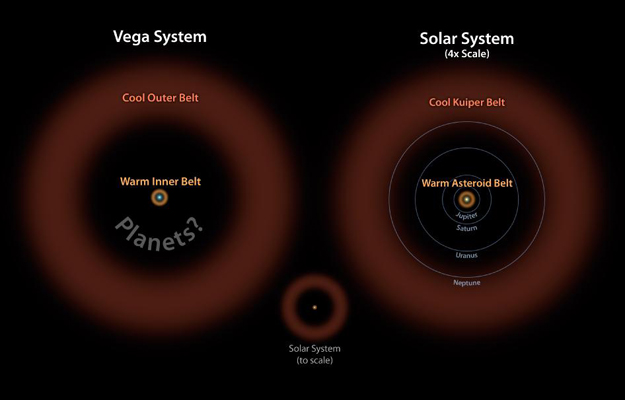 Vega, the second-brightest star in the northern night sky, has an asteroid belt similar to our sun, discovered by a team of astronomers led by the University of Arizona. A wide gap between dust belts in nearby bright stars is a strong clue to yet unknown planets orbiting the stars. Findings from infrared space telescopes are the first to show an asteroid-like belt ringing Vega. The discovery of an asteroid belt around Vega makes it more similar to its twin, a star called Fomalhaut, than previously known. Both stars are now known to have hot inner asteroid belts and comet-filled outer belts, similar in architecture to the asteroid and Kuiper belts of our own solar system.

“Finding an asteroid belt similar to our solar system and other bright stars nearby is exciting,” said Kate Su, an astronomer at the UA Steward Observatory. Su is lead author of a paper on the findings accepted for publication in the Astrophysical Journal.

The Spitzer and Herschel telescopes detected infrared light emitted by hot and cold dust in discrete regions around Vega and Fomalhaut, revealing the existence of the debris disks. Both belts of our solar system contain “planetsimals” – leftover “crumbs” that did not turn into planets.

“The wide gap between the two debris belts strongly suggests that several planets orbit these stars even though we cannot see them,” Su explained. “We know this because in systems without planets, debris is evenly distributed.”

Su explained that the planets create spaces in the debris disks through a process called “sculpture”.

“Planets scatter objects under their gravitational influence. Over time, you will no longer see dust or planetesimals in the region where they reside.”

The debris structure around Vega and Fomalhaut is divided into an inner “warm” belt and an outer “cold” belt with a large gap between them. The temperature of the “hot” belt has been measured at minus 190 degrees Fahrenheit, while the outer belt is minus 370 degrees, much colder than any place on Earth.

In our solar system, the inner asteroid belt between Mars and Jupiter is held together by the gravity of terrestrial planets and giant planets. The giant planets exclusively carve the outer Kuiper belt. Unlike Kuiper Belt objects, which look like “dirty snowballs” because they contain large amounts of water ice, asteroid belt objects do not stay cold enough to hold much ice, which sublimates in space, leaving behind rocky bodies. Comets, on the other hand, come from the Kuiper belt and the outer part of the solar system.

“We can’t see asteroids, but the product of their collisions with each other,” Su said. “Vega and Fomalhaut truly live up to their ‘twin debris disk’ monikers, as they both have hot, asteroid-like and cold, Kuiper Belt-like disks of material.”

Comets and collisions of pieces of rocky planetesimals replenish the dust in these bands. The asteroid belts of these systems cannot be seen in visible light because they are too close to their host stars and are dwarfed by the brightness of their stars.

Vega and Fomalhaut are like twins in other ways. Both have about twice the mass of our sun and burn a warmer, bluer color in visible light. The two stars are relatively close at around 25 light-years away and are the same age, around half a billion years. Our sun is 4.5 billion years old.

Fomalhaut has only one known candidate planet in orbit, Fomalhaut b, which is one of about a dozen exoplanets that have been directly imaged by instruments from Earth or space. No planets have been detected around Vega, but the new observations strongly suggest their presence.

Both the inner and outer belts contain much more material than our own asteroid and Kuiper belts. The reason is twofold: the star systems are much younger than our own, which has had hundreds of millions of years longer to clean up, so to speak, and the systems formed from a cloud of gas and dust initially more massive than our solar system. .

The gap between the inner and outer debris belts for Vega and Fomalhaut also corresponds proportionally to the distance between the asteroid belts of our sun and Kuiper. This distance corresponds to a ratio of about 1:10, with the outer belt being 10 times farther from its host star than the inner belt. In our solar system, the asteroid belt is about two to three times farther from the sun than the Earth, and the Kuiper belt begins about 30 times the Sun-Earth distance. The Vega and Fomalhaut asteroid belts start about four times as far out as our own asteroid belt, again in proportion to the higher mass and luminosity of their system.

As for the large gap between the two belts, a single oversized planet tens of times the mass of Jupiter could gravitationally carve out such an area by cleaning up and accreting the parasitic dust. But previous planet-hunting surveys would have spotted any object of this magnitude. Instead, several planets the size of Jupiter or smaller that have yet to be detected fit the bill better for creating a dust-free zone between the debris disks. A good star system for comparison is HR 8799, which has four known planets sweeping the space between two disks of similar debris.

“Overall, the large gap between the hot and cold belts is a panel that points to several planets likely orbiting Vega and Fomalhaut,” Su said. “Our finding echoes other recent research which indicates that low-mass planets outnumber massive planets and that several exoplanet systems are also quite common.”

If unseen planets do in fact orbit Vega and Fomalhaut, those bodies probably won’t stay hidden for long. “New facilities coming up should be able to find the planets,” said paper co-author Karl Stapelfeldt, head of the Exoplanet and Stellar Astrophysics Laboratory at Goddard Space Flight Center.

No more press releases and status reports or featured stories.