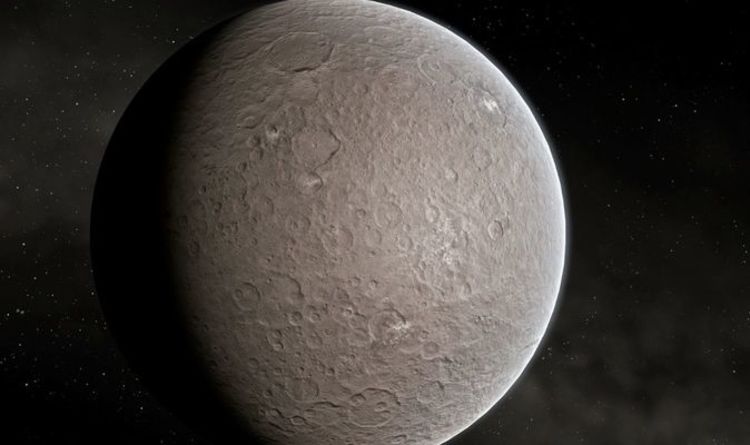 Ceres, which is 590 miles (950 km) in diameter, is the largest object in the asteroid belt – a ring of space rocks located between the orbits of Mars and Jupiter. A team of scientists has now proposed to build a “mega-satellite” orbiting Ceres that could house humans. The researchers, from the Finnish Meteorological Institute, say the materials needed to build the satellite could be extracted from Ceres itself.

The team recognized the abundance of nitrogen on the dwarf planet that could be used to create an Earth-like atmosphere. The Earth’s atmosphere is made up of 78 percent nitrogen.

The researchers said in their paper, which was published on the peer-review site arXiv, that a disk-shaped mega-satellite could be created that would be made up of smaller rotating satellites.

All the bodies would be attached by magnetic tether, the researchers said.

To create gravitational conditions similar to those on Earth, these spinning satellites would have to orbit Ceres in just 66 seconds.

The team also said that a space elevator would be needed to transport the materials from Ceres to the man-made station.

There are several advantages to building a base around Ceres, the researchers argued.

First, they state that far from Earth conditions there will be no natural disasters.

There would also be more space for the growing human population.

â€œThe motivation is to have an agglomeration with an artificial gravity that allows growth beyond the living area of â€‹â€‹the Earth, while allowing the inhabitants to move easily within the agglomeration and a population density reasonably low of 500 / km2.

â€œBecause intra-colony movements can be propellantless, achieving this goal is possible at least in principle.

â€œLifting Ceres materials is energetically inexpensive compared to transforming them into habitats, if a space elevator is used.