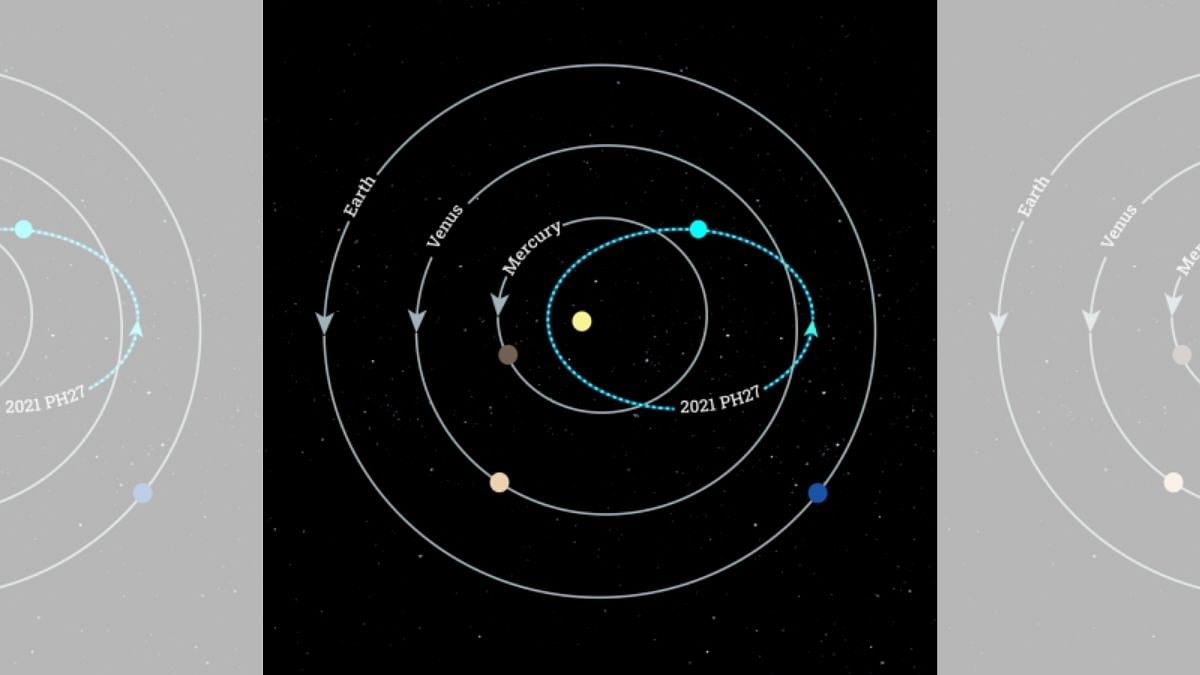 
New Delhi: Scientists have discovered a new asteroid that orbits the Sun once every 113 days, making it the asteroid with the shortest known orbital period.

The asteroid, named 2021 PH27, has the second shortest orbital period for all objects in our solar system, after Mercury, which has an orbital period of just under 88 days.

The asteroid is about 1 kilometer in diameter and was discovered in evening twilight images taken by researchers at Brown University.

The researchers said it is in an unstable orbit, which crosses the paths of Mercury and Venus. This means that in a few million years it will likely be destroyed in a collision with one of these planets or the Sun, or it will be removed from its current position.

Studying objects like this can help scientists understand where asteroids came from and the forces that shaped the architecture of our solar system.

An object like 2021 PH27 experiences enormous thermal and internal stresses due to its proximity to the Sun. Comparing 2021 PH27 to objects orbiting beyond Earth will improve researchers’ knowledge of its composition and the materials that allow it to survive in these extreme conditions. Read more.

A fossil that was confiscated during a police raid in Brazil turned out to be that of a rare specimen – one of the best-preserved flying reptiles ever found – after scientists studied it for nearly five years.

In 2013, smugglers from São Paulo were about to ship a cache of fossils out of the port of Santos. But the local police foiled their attempt. Among the fossils recovered were six large limestone slabs.

The specimen of a subgroup of flying reptiles called pterosaurs, also known as Tapejarids, was preserved on these slabs.

These reptiles had enormous head ridges. There are abundant pterosaur fossils in Brazil, but most of them only retain partial remains.

By bringing the slabs together, the researchers were able to examine the entire fossil, even a scanner to reveal the bones hidden in the stone.

The specimen has almost the entire body, including soft tissue remnants next to the bones, making it the most complete tapejarid skeleton ever found in Brazil.

The species is called Tupandactylus navigans, which probably had a terrestrial foraging lifestyle.

However, the specimen has all the necessary adaptations to allow it to fly. Further studies will provide a better understanding of the way of life of this fossil. Read more.

Read also : Reason for Jupiter’s high temperature and how Stonehenge survived the test of time

Scientists have found that the females of the human species may not be the only ones who need to find ways to avoid harassment from the males of the species.

It seems that young female hummingbirds have evolved in a way that disguises themselves as males, in order to avoid aggressive behaviors of males during feeding, such as pecking and slamming of the body.

Researchers observed white-necked Jacobean hummingbirds in Panama and found that more than a quarter of females have the same brightly colored ornamentation as males.

For birds, it is unusual for female juveniles to resemble adult males.

Female Jacobins, on the other hand, tend to have muted green, gray or black colors that allow them to blend in with their surroundings.

To find out why some female hummingbirds had the showy colors that typically characterize the male of the species, the researchers set up a scenario with stuffed hummingbirds on feeders and observed real hummingbirds interacting with them.

This means that the only time they have had flashy colors is precisely during the period when they are not looking for mates. Read more.

Read also : Water vapor found in Ganymede’s atmosphere and origin of the asteroid that killed the dinosaurs

The United Nations (UN) said this week that Madagascar could face what would be the world’s first “climate change related famine”.

Tens of thousands of people are already suffering from hunger and food insecurity, according to the UN, after the country has been without rain for four years.

The drought is the worst on record in four decades.

According to a spokesperson for the United Nations World Food Program, the famine conditions are due to the climate rather than conflict, leaving families to survive on the insects.

The UN estimates that 30,000 people are currently experiencing the highest level of internationally recognized food insecurity. The numbers could increase further. Read more.

DNA found in Indonesian teenager who died 7,200 years ago

Archaeologists have discovered and analyzed ancient DNA in the remains of a teenager who lived 7,200 years ago in Indonesia. DNA discoveries are changing what we know about migration to the region in ancient times.

The remains, belonging to a teenager nicknamed Bessé, were discovered during excavations in 2015.

It is believed to be the first time that ancient human DNA has been discovered at Wallacea, which is the vast chain of islands and atolls in the ocean between mainland Asia and Australia.

Finding ancient DNA in the humid tropics is rare because climatic conditions do not allow the remains to be preserved. There are very few skeletons that have yielded ancient DNA in all of mainland Southeast Asia.

In the colder climates of Europe and America, the analysis of ancient DNA helped advance the understanding of early human history.

The researchers found that half of the adolescent’s genes are similar to those of present-day Indigenous Australians and inhabitants of New Guinea and the islands of the western Pacific.

This suggests that the teenager’s ancestors moved from mainland Asia through these Wallaceous Islands to Sahul, which was the combined Ice Age landmass of Australia and New Guinea.

DNA has also shown an ancient link to East Asia, which calls into question what was previously known about the timeline of migration to Wallacea.

This suggests that some people from Asia migrated to this region much earlier than expected. Read more.