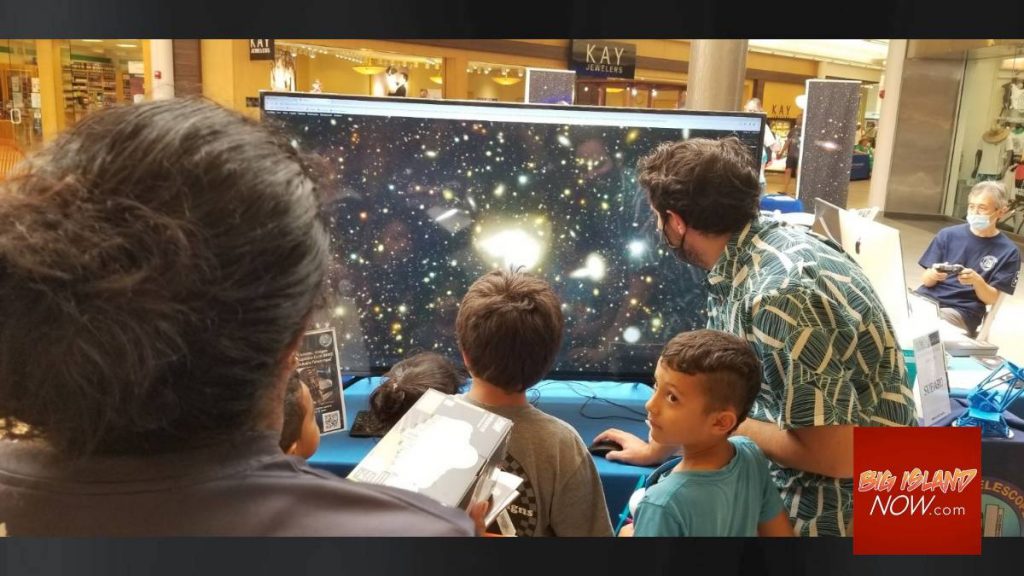 At least one future astronaut, one burgeoning paleontologist, and hundreds more of all ages and sizes were able to space out Saturday, May 14 at Prince Kūhiō Plaza in Hilo during AstroDay.

The event, sponsored by the Maunakea Astronomy Outreach Committee, offered attendees a chance to learn about discoveries made and work done by astronomers and other scientists on the Big Island and elsewhere in the islands.

More than 20 organizations attended, giving demonstrations and telling everyone who stopped by their booth what they do — sharing their passion for science and technology. There were gadgets to look at, stars to gaze at, a black hole cut out photo prop to take your picture and much more. Even “Star Wars” was represented on AstroDay, with a Stormtrooper patrolling the halls of the Hilo Mall and a few lightsabers to wield.

Programs and events on the main stage also provided entertainment and the opportunity to ask an astronomer questions about space. Prizes were given out and the winners of the annual Maunakea Coin Contest were announced.

This year’s winning piece was designed by Luche Angelina Mardie Asuncion Ganot, a junior from Pāhoa High and Middle School. The overall second place design was created by Ros Haleyah Mari A. Ganot, an eighth grade student at Pāhoa High and Intermediate, and the third place design was created by Ella Haruko Tanimoto, a fourth grade student at Waimea Elementary School.

The commemorative coin features artwork designed by a Big Island student that includes culture, astronomy, and nature items found on or around Maunakea.

No matter why they came, those who attended AstroDay 2022 had plenty of opportunities to have fun.

Nohea Nicoll, one of the many keiki in attendance this year, told Big Island Now her favorite part of AstroDay was all the activities. She also enjoys learning about what scientists and astronomers do.

“My favorite part of AstroDay is where I can learn new things about astronomy,” Kekai Navor-Kahalewai, who attended Saturday’s event with ‘ohana, told Big Island Now.

And it’s not just keiki and members of the public who appreciate AstroDay.

“AstroDay is wonderful because it provides an opportunity to raise awareness in our community,” Jasmin Silva, who works with the James Clerk Maxwell Telescope and East Asia Observatory, told Big Island Now during the event. as she occupied the observatory stand. “Growing up in Hilo, I was able to attend events like AstroDay that inspired me to pursue astronomy.”

She hopes AstroDay will also inspire others.

“I hope that at least every AstroDay we can have a scientific future,” Silva said. “It’s the most important thing for me.”

Tishanna Ben, who works for the National Solar Observatory, which built and operates the Daniel K. Inouye Solar Telescope on Haleakalā in Maui, said her favorite part of AstroDay is simply the community coming together, to see all the new people and all the excited faces of those who are ready to learn about science and the different types of research taking place in Hawai’i.

If you weren’t able to make it to the Hilo Mall on Saturday, don’t worry. There will be another chance to take a trip to space with astronomers and scientists later this year, with AstroDay scheduled at Kona Commons in Kailua-Kona, likely in November.