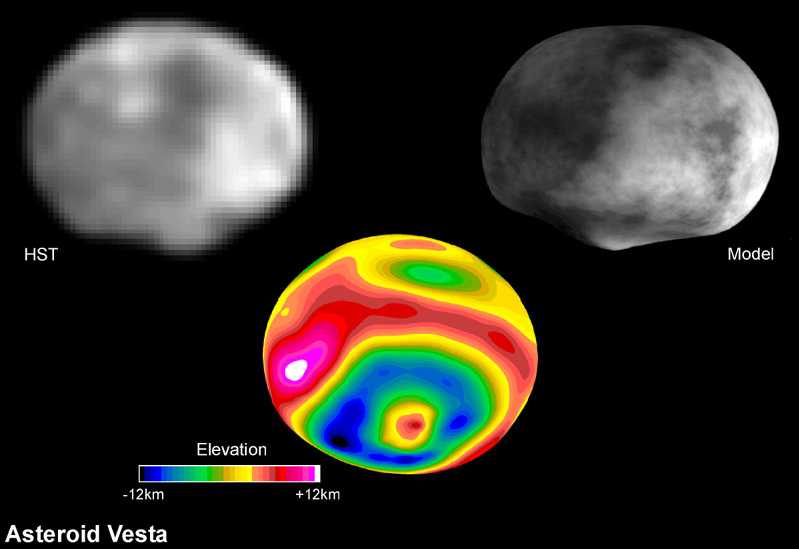 Astronomers Baffled by Basalt in the Outer Asteroid Belt

Analysis of the chemical composition of two asteroids from the outer asteroid belt has upended the classification system for these small bodies, which orbit between Mars and Jupiter.

Dr René Duffard, said: “We seem to have detected basalt on the surface of these asteroids, which is very unusual for this part of the asteroid belt. We do not know if we have discovered two basalt asteroids with a very particular and novel mineralogical composition or two objects of a non-basalt nature which must be included in a completely new taxonomic class.

The presence of basalt means the asteroid must have partially melted at some point in the past, implying that it was once part of a larger body that had internal heating processes. However, there do not appear to be any other basalt fragments in the area and from spectral analysis it is unclear whether the two are fragments of the same parent body or not.

Until recently, most known basalt asteroids, which are classified as type V, were believed to be fragments of Vesta, the second largest object in the asteroid belt. Since 2001, several V-type asteroids have been identified as not belonging to this Vesta family, including (1459) Magnya, the first basalt object detected in the outer asteroid belt.

The reflectance spectra of both bodies appear to show characteristics of a V-type asteroid. However, there is a shallow absorption band around the red visible light wavelength, which has never been observed. previously in other V-type spectra. This means that these objects have a slightly different chemical composition and do not fit into any existing category of asteroids.

The unexpected drop in spectra could have two sources: it could be due to impacts with other asteroids or comets “shocking” iron-rich compounds into an oxidized state, or it could indicate the presence of olivine, a green mineral also known. as a semi-precious stone.

Dr Duffard said: ‘We now need to observe both objects in the near infrared to confirm if they have a basalt surface. If they do, we will have to try to determine where they came from and the fate of their parent objects. If they don’t, we’ll have to come up with a new class of asteroids.

NASA’s Dawn spacecraft is a “Go” for the asteroid belt