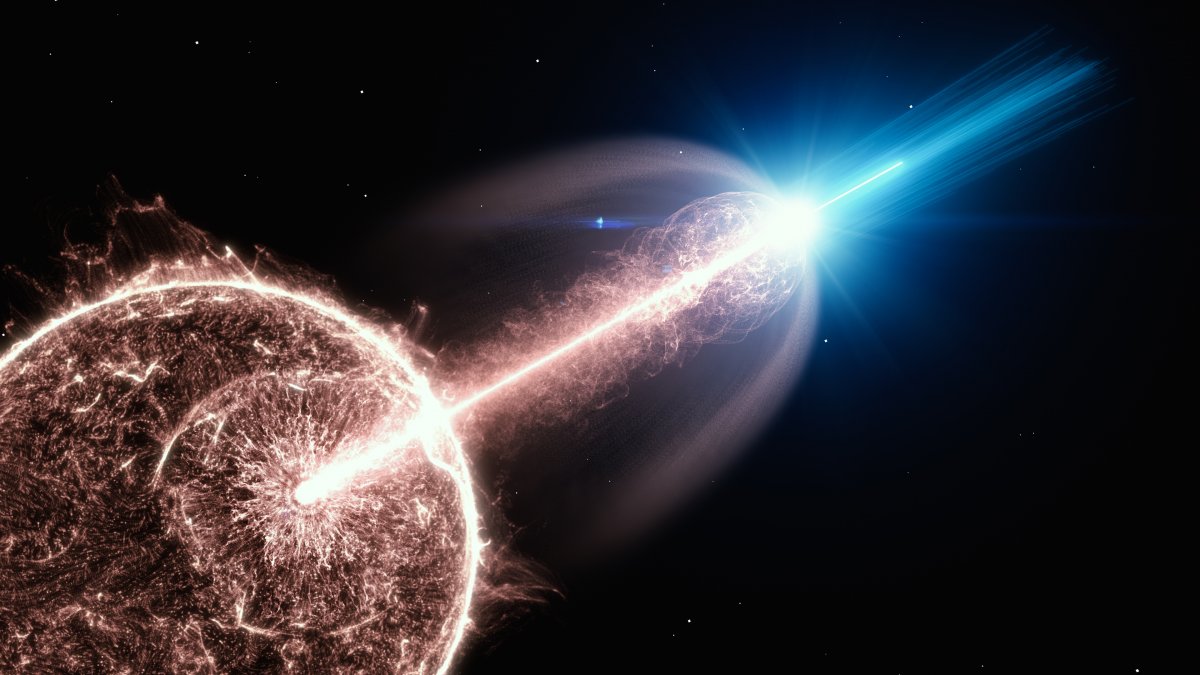 Astronomy: do gamma flashes and supernovae threaten the Earth?

We live in calm and peaceful times and we have the worst behind us. Italian researchers have come to this optimistic conclusion. Anyone who rubs their eyes with irritation at the current state of affairs should keep in mind that these researchers are astronomers. They think spatially and temporally in different dimensions than ordinary people on earth.

Modeled the history of our galaxy

“The best place and the best time to live in the Milky Way” is the title of the to studywho preferred Ricardo Spinelli (University of Insubria) now to Europanet Scientific Congress (EPSC) presented. It deals with the threat to life on Earth-like planets from supernova explosions and gamma-ray bursts. In order to more precisely assess this risk, celestial scientists have modeled the evolution of our original galaxy over billions of years.

Gamma-ray bursts are considered the most energetic events in the universe. They are attributed to the explosion of very massive, rapidly rotating stars and the fusion of two neutron stars or black holes. As much energy can be released in ten seconds as the entire Milky Way emits in a hundred years. Supernovae that mark the end of a star’s life of at least eight times the solar mass or that occur when a white dwarf in a binary star system has drawn too much mass from its mate are less powerful. Its energy supply corresponds to that of the Milky Way over a few hours. But they are seen more often. Such an event in the cosmic neighborhood could negatively impact living conditions on an Earth-like planet.

Responsible for a mass extinction?

In fact, the first of the five great mass extinctions of the past 500 million years, in which at least 75 percent of the planet’s animal and plant species became extinct in a short time, has been attributed to a cosmic planet. . because of several studies. Radiation from a burst of gamma rays within 3,300 light years could have impacted the atmosphere at more than 100 kilojoules per square meter and destroyed 90% of the ozone layer, according to Spinelli. As a result, living things have been exposed to UV rays from the sun without protection. The resulting nitrogen oxides are also said to have significantly lowered the global temperature.

Model calculations performed by Spinelli and his colleagues support this theory. According to this, the entire Milky Way was shaped by frequent, high-energy starbursts until six billion years ago, which must have made it difficult for life to develop. After that, supernovae and short gamma-ray bursts lasting less than two seconds moved into the interior of the Milky Way, an area within a radius of about 6500 light years from the center. Further from the galactic center at a distance of 26,000 light years, where the sun is also located, lies the comfort zone, where life could develop largely without worry. Further on, however, the threat of long gamma-ray bursts lasting more than two seconds increases. The lower frequency of the heavy elements here favors the formation of massive and rapidly rotating stars, explains Spinelli.

The greatest evolutionary pressure would come from these gamma flashes. “Although they occur much less frequently than supernovae, they can trigger mass extinctions at a greater distance” says Spinelli. “As the most energetic of events, these are the bazookas with the greatest reach.” According to the model’s calculations, they occur in our cosmic neighborhood about 1.3 times in 500 million years. The Ordovician mass extinction 450 to 440 million years ago could therefore have been triggered by a long gamma flash.

Even though the universe is a little quieter now, we shouldn’t feel too secure. Because species extinctions are not just caused by cosmic events. “The sixth mass extinction that is currently taking place”, emphasizes Spinelli, “is due to human activities”.

Source of the article

Where to see the next solar eclipse