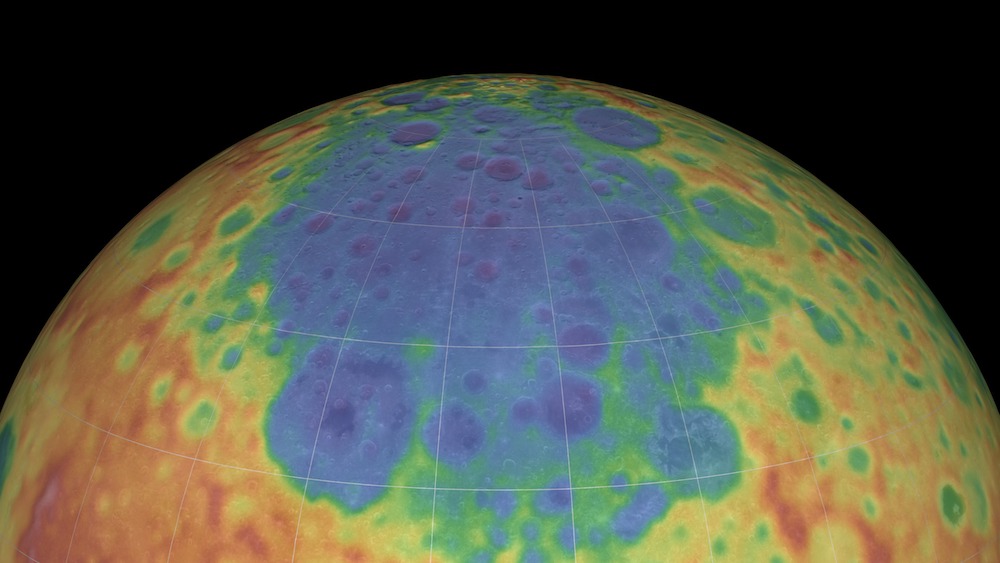 Throughout human history until 1959, the dark side of the Moon was invisible to our eyes. The Moon rotates once each time it orbits Earth, and this synchronization keeps one side of the Moon pointed towards us and the other always pointed outwards.

But then the Soviet Union sent the Luna 3 spacecraft into orbit around the Moon, and for the first time we got a glimpse of the landscape that until then had been synonymous with “mysterious and hidden.” It was shocking: it was completely different on the near side! The side we can see has two main components: rough, cratered highlands, and smoother, much darker lowlands, the latter created from lava flowing through the surface. These resemble bodies of water on Earth, so they are called maria (singular; mare), meaning seas.

But the other side only has one little mare, and the rest is completely covered in craters. Years later, as technology improved, other differences were discovered. The near side contains many more elements thorium and titanium than the far side, as well as what is called the KREEP terrane: this means potassium (whose symbol is K), rare earth elements and phosphorus. Eventually it was discovered that the crust on the far side is also much thicker than on the near side.

Over the years, some pretty clever ideas have come up to explain this. The first is that after a Mars-sized protoplanet hit Earth hard enough to throw enough material into orbit to merge and form the Moon, it actually formed two moons; a large primary and a smaller one. The second eventually slammed into the Moon, forming the thicker crust on the far side. Another is that when the Moon formed, it was so close to Earth that the still-hot planet from the giant impact heated it, causing material to flow to the other side of the Moon and its condensation, thickening the crust. In both cases, this is then linked to more volcanism on the near side, which has changed the elemental abundances.

A new idea has just been published, however, that is quite different: Planetary scientists imply a massive impact on the Moon itself that was so huge it changed the way the Moon’s hot mantle was flowing, creating the difference in the surface mineral composition of the hemispheres. [link to paper].

In the southern part of the lunar far side is a huge basin, called the South Pole-Aitken (or SPA) basin, the result of an impact so enormous that it stuns the imagination. It stretches for about 2,500 kilometers, more than half the width of the United States! The impact that caused it must have been nothing short of apocalyptic. It is one of the largest impact basins in the solar system.

In the new work, the scientists wondered if this huge event could somehow be linked to the chemical difference between the near side and the far side. The timing was about right; the impact occurred about 4.3 billion years ago, around the time the maria began repaving the near lunar face. The material lifted in maria volcanism came from the Moon’s mantle, the hot fluid rock beneath the crust, so scientists focused their attention there.

Using physical models of heat flow through the Moon after the impact, they simulated different scenarios after the giant SPA impact. What they found is quite interesting: Under virtually all realistic conditions, the impact generated a vast plume of heat that moved through the Moon’s interior, changing the way the mantle flowed.

A huge pulse of heat would have moved to the opposite side of the Moon – technically, the antipode – and sequestered a lot of KREEP there. Potassium has an isotope that is radioactive, and other radioactive elements such as thorium and uranium are also associated with the KREEP material. It would have heated the underside of the crust there, leading to lots – lots – of volcanism. This location on the Moon is in the sprawling Oceanus Procellarum, a very large mare in the lunar northwest that is the most obvious lunar feature you can see with the naked eye on a full moon. This region is known to have a lot more thorium and titanium (which is also associated with KREEP), so that’s fine.

Shortly after, about 3.9 billion years ago, another huge impact blew up Mare Imbrium, one of the last giant impacts on the Moon. It also released a lot of KREEPy stuff below the surface, further altering the surface.

It’s still hypothetical, but the science agrees, and I have to say that it doesn’t imply any special circumstances; we know that the South Pole-Aitken Basin exists and was large enough to affect the entire Moon. It’s an added bonus on top of the idea that physics also works; scientists like hypotheses that use what we already know and don’t require one-time events. The hypothesis is agnostic as to the difference in crustal thickness, although it is possible that other physics is involved that could also lead to this.

Much of this evidence, like the KREEP minerals, was discovered during the exploration of the Moon during the Apollo era, and of course this whole idea was kicked off by the Soviet orbiter missions. We still don’t fully understand the origin and evolution of the Moon over the past 4.4 billion years, but we are about to embark on a new era of lunar exploration. What else are we about to learn?