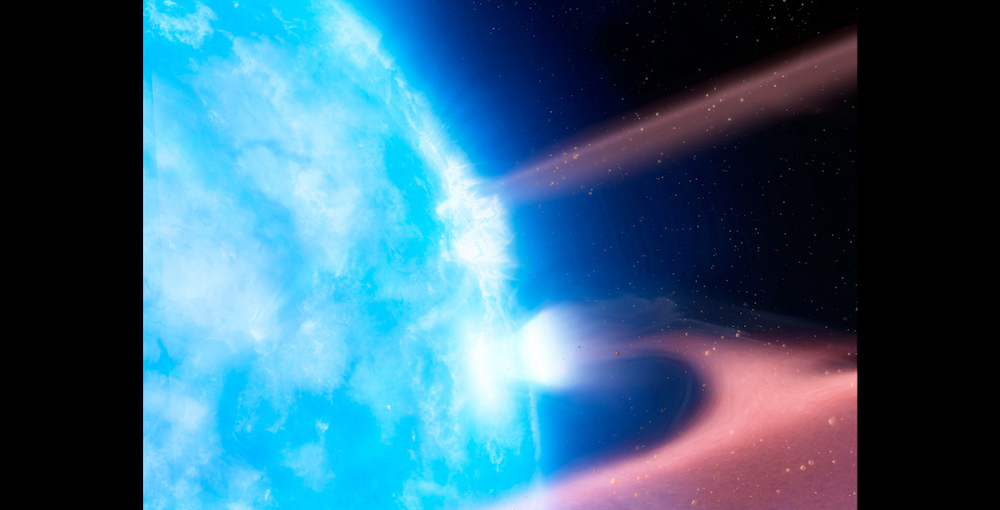 For the first time, astronomers have found direct evidence of a dead star currently eating the remnants of its former planets, the debris accelerated to hellish speeds and temperatures before slamming into the star’s surface.

You might want to read that again, because wow. We know this has been going on for a while, but so far the evidence has been circumstantial. The new observations have detected, metaphorically speaking, the death cries of the debris as they plunge toward their final destruction.

The dead star in this case is called G29-38. It’s a white dwarf; the core of a star like the Sun exposed to space after the star has become a red giant and expelled its outer layers. A white dwarf is small, hot and very massive, which makes it extremely dense too.

G29-38 has about 60% of the Sun’s mass squeezed into a ball just 18,000 kilometers in diameter, less than half the size of Earth. A cubic centimeter (about the size of a six-sided die) of its material would weigh half a ton. The gravity on its surface is about 150,000 times that of Earth — I would weigh over 11,000 tons on its surface, but I would also be a vapor since the temperature is around 12,000°C.

Gravity on a white dwarf is so strong that anything heavy like iron or calcium sinks fairly quickly to its depths. We expect to see only hydrogen and helium there. However, with many of these stars we see heavier elements, and over the years it has become clear that this is due to rubble, planetary debris from their previous systems of planets that have been torn apart and fallen on their surfaces. In fact, one of my favorite astronomy stories is that the very first evidence that we ever had other planets outside of our solar system – from 1917! – comes from exactly this kind of event.

We can infer the amount of material falling on the surface of a white dwarf by the abundance of these heavier elements there. But that heavily depends on the theoretical modeling of how matter mixes with the strange fluid of a white dwarf, so it’s indirect. So what would direct evidence look like?

The material is abruptly accelerated by the star’s gravity and hits the surface at something like 5 million kph. The heat generated can reach millions of degrees, and this fierce impact creates eruptions of energy, emitted in the form of X-rays.

Astronomers used the Chandra X-Ray orbital observatory to take a long look at G29-38, watching it for more than 100,000 seconds, more than a solid day (link to article). He saw faint X-ray emission from the star indicating the slow accretion of matter on its surface. Based on the luminosity, they estimate that about 1,600 tons of disturbed planetary matter screams at the surface of the white dwarf every second.

Previous observations using the abundances of heavy elements swimming on the surface of G29-38 give roughly the same number, which is reassuring. He also confirms that this is the source of the X-rays.

If a white dwarf is in a close orbit around another star, it can also accumulate matter that way, but the rate of matter falling to the surface is 100,000 times higher, 10 to 100 times higher hot and thousands if not millions of times brighter than what’s out here. Also, G29-38 is a loner, the core of a lone star, so there is nothing else around it to be the source of matter. It is known to emit more infrared light than a lone white dwarf, which is exactly what you would expect from a debris disk of planetary chunks orbiting around it, heated by the intense light of the star.

Overall, the evidence is very clear: it was once a star much like the Sun that happily warmed up a system of planets around it…but then it died, became a zombie, and started killing them. to eat.

It’s not the happiest of endings, but I admit it’s really interesting. And a reminder that in, oh, seven billion years, the same thing will happen here. The Sun will expand, gobble up the three inner planets – that means us too – become a white dwarf, then destroy and maybe eat some of the outer planets as well, unless they get lost in space over the course of the next hundred billion years.

If you’ve ever wondered what it would be like to be a character in a horror movie, well, you are one. It’s just that the Universe takes a lot longer to get to the third act.