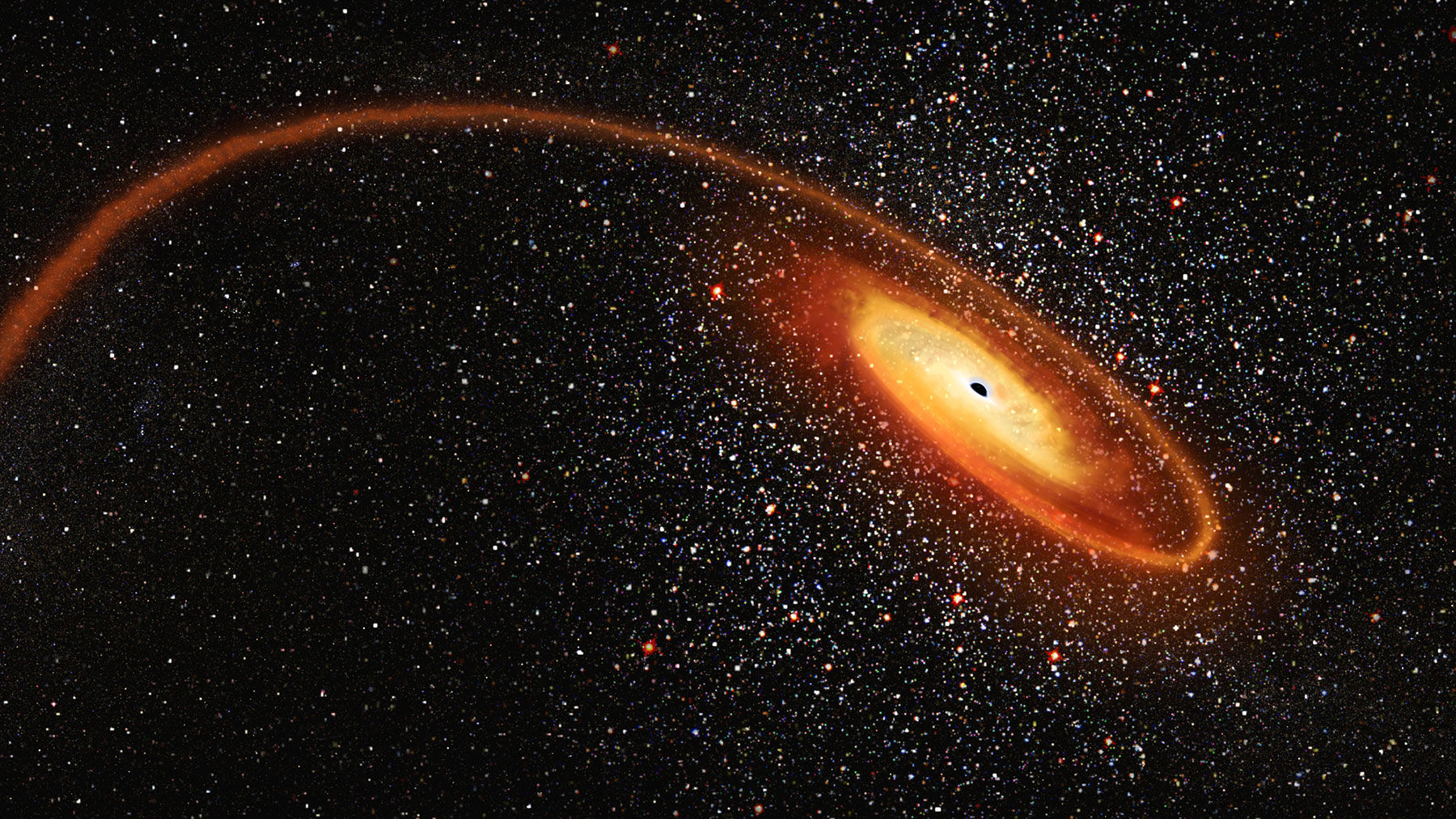 You’d think black holes would be weird enough for some astronomers.

They form in the core of exploding stars. They defy Newtonian logic and need relativity to properly account for their gravity. They distort space and time. They power the most luminous single objects in the Universe. They don’t just drag you down, they spaghettis you first.

So yeah, weird. But not bizarre enough for some astronomers. They had to look and see if small black holes could be in the accretion disks of huge black holes and also attract stars close enough to become binary systems and then tear the star to shreds and create such a powerful explosion that we can see it for billions of light years [link to paper].

Oh. Good. Now that I’ve written that, it’s easy to see why they would want to know if these exist. Because WOW.

OK, first of all.

We know that at the center of almost every large galaxy is a supermassive backhole, a monster with millions to billions of times the mass of the Sun. Some are quiescent, like Sgr A*, the 4 million solar mass black hole at the center of our Milky Way. Others actively suck in gas and dust, which fall into a disk called an accretion disk. This material is heated violently by friction until it can reach temperatures of millions of degrees, glowing violently and observable in the visible universe. We call it a active galactic nucleus, or AGN for short. M87 is a famous example.

This disk is hell and the last place in the universe you want to be, except maybe closer to the supermassive black hole itself. But, incredibly, it’s getting worse.

Galaxies have billions of stars and some will orbit quite close to the galactic center. Within our own galaxy is a cluster of stars called the S cluster with hundreds of stars, possibly more, orbiting within a light year of Sgr A*. This is probably also true for other galaxies. Sgr A* doesn’t have a huge accretion disk, but in galaxies with supermassive black holes that do, those stars could dip through the disk.

The physics is complicated, but when a star passes through the disk, it sucks some of this material from the disk and accretes it. Over time this affects its orbit so that it will eventually orbit in the same plane as the disk, literally spending all of its time in the disk. It will continue to accrete matter and as it does, it will lose orbital energy and fall towards the huge central black hole.

The same goes for small black holes, those that form when a massive star explodes. The core collapses and, if massive enough, will form what we call a stellar-mass black hole. There may be many near the galactic center and for the same reason they may eventually fall into the disk, align their orbits, and then work their way towards the center.

This is what is called, in the typical euphemism of astronomy, a tidal disturbance event or TDE. We’ve seen them in many distant galaxies, usually with a supermassive or intermediate-mass black hole. Since these are small events from black holes with about one millionth this mass, they are called micro TDE.

Astronomers used simulations to see if this was possible. They created models of a population of stars and black holes around a supermassive black hole of one million solar masses and a large accretion disk. Using typical values ​​for star masses, lifetimes, accretion disk size and density, and an AGN lifetime of about 10 million years, they found that on average, you would expect 100 stars and a handful of black holes to be in the disk.

Then, looking at how long it all takes, how many AGNs there are in the Universe, etc., they figured out how many micro-TDEs we expected to see. The answer is 170 per cubic gigaparsec per year. It’s a cube 3.26 billion light-years on a side, so huge, and it would contain a lot of galaxies. But that means we expect to see a lot of these events.

At the moment, we don’t. There could be many reasons for this, including the fact that an AGN is quite bright and constantly fluctuates in brightness, making it difficult to see a micro-TDE. They note that two events were observed that are consistent with them being micro-TDEs: ASASSN-15lh, which was about 3 billion light-years away from us, and ZTF19aailpwl, which was 4 billion light-years away. light years. Both were exceptionally bright events, brighter than they would expect from a micro-TDE – both peaked at around a trillion times brighter than the Sun, if you needed something to keep you up at night, but were otherwise compatible with micro-TDEs. They also posit that we saw them because they were so bright and weaker micro-TDEs are harder to spot.

They also urge astronomers to watch for AGNs with black holes above about 100 million solar masses. Such black holes are so big that they eat whole stars and don’t tear them apart, so you don’t get TDE at all. If we see one from such a galaxy, it’s a good micro-TDE candidate. Clever. Additionally, micro-TDEs look different than full-size TDEs; they take longer to reach their maximum brightness and tend to emit more high-energy X-rays and gamma rays, which helps distinguish the two.

It’s all pretty wild. I love it when astronomers play around with ideas like this, starting with things we know can happen and then letting them play around using real physics to see what box occur. So far, only a few TDEs have been seen, but as larger telescopes like the Vera Rubin Observatory and the Nancy Grace Roman Space Telescope come online, we’ll see many more.

Will we spot a micro-TDE? Time and the voracious mouths of black holes will tell.

Best Astronomy Apps for Stargazing in 2022