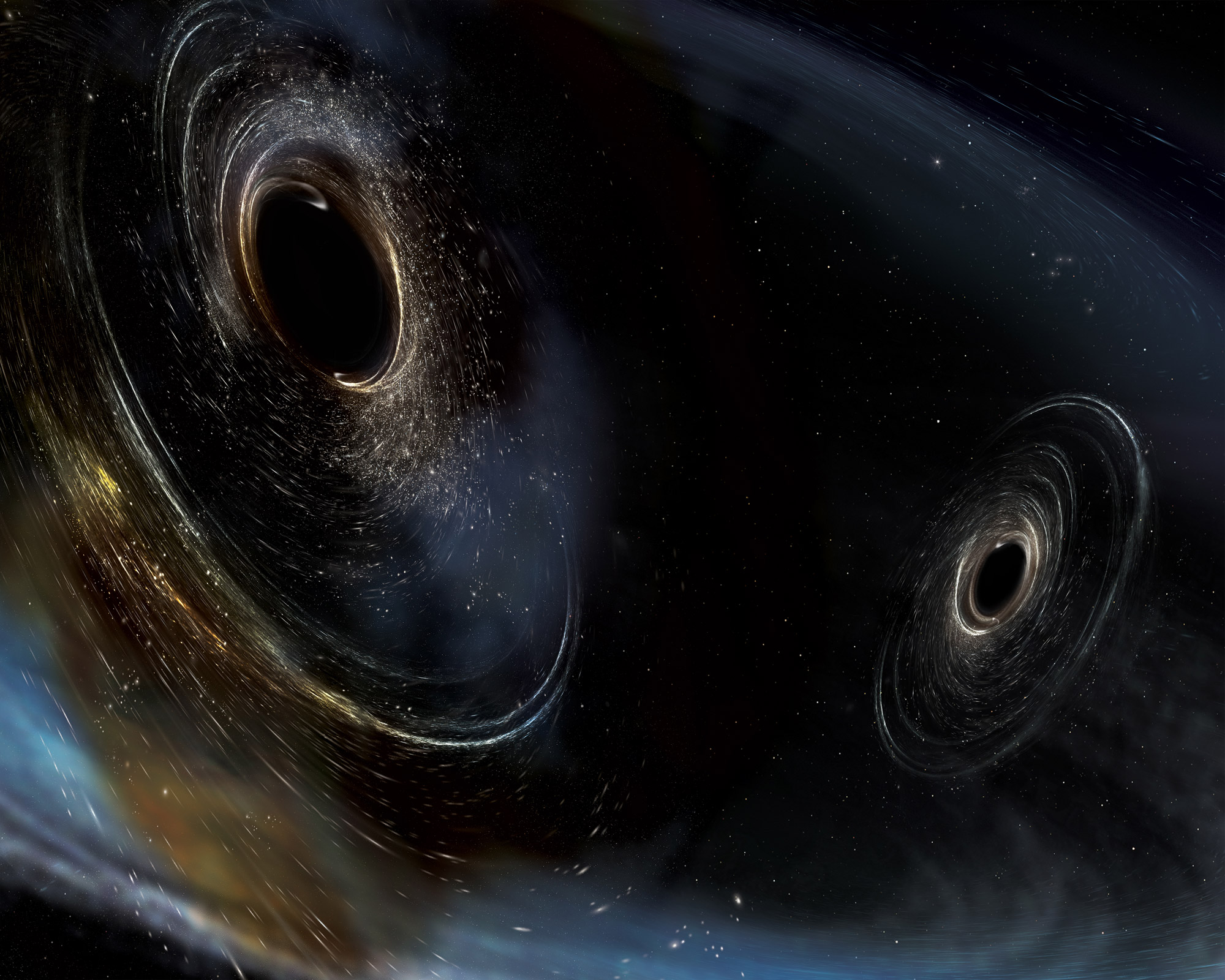 On May 21, 2019, a ripple in the fabric of spacetime swept across Earth at the speed of light.

These pass through us all the time, but this one was strong enough to noticeably distort space, at least for the detectors used by the LIGO/Virgo collaboration. As the waves passed, they compressed and rarefied an array of laser beams, varying their length by a tiny, tiny amount: about 1/1000th the size of a proton. But that was enough.

The detectors detected it and the software monitoring them triggered an alarm. Astronomers were alerted and were able to measure the shape of these gravitational waves as they pass through the detectors. They determined that the waves were caused by the merger of two black holes. And not just any black holes, but those with 66 and 85 times the mass of the Sun, the biggest merger ever detected. When the collision took place, a 142-solar-mass black hole remained, with the excess mass converted into energy, creating the gravitational ripples in spacetime predicted by Einstein more than a century ago.

Astronomers have dubbed the event GW19051.

It is a mystery how the two black holes had such large masses; perhaps they themselves were the product of merging lower-mass black holes. But another mystery remains: How? ‘Or’ What did they merge?

Gravitational waves are literal waves of spacetime itself, like the fabric of a waving flag in the wind. They are generated when a mass is accelerated, and the waves are stronger and sharper if the object is very massive, small and accelerated hard. Thus, two black holes orbiting each other are the perfect generator of gravitational waves.

The standard merger scenario begins with two black holes orbiting each other. The gravitational waves emitted are weak at first because the black holes orbit at a certain distance from each other. If the orbit begins elliptical the emission of these waves will tend to circularize it. Not only that, but the waves steal orbital energy from both, and they slowly approach each other for eons, accelerating faster and faster, so shortly before they merge, they swirl madly around each other in a circular orbit at nearly the speed of light. For the last few seconds, they emit gravitational waves until and even momentarily after they collide and merge to form a single, larger black hole.

But what if that’s not always the case? Can two black holes still be on an elliptical path even at the time of merger? If so, how would that happen?

Which brings us back to GW190521. A team of astronomers used extensive modeling of GW190521, and they believe it came from an elliptical merger, a substantially non-circular one. If so, it could give us clues about pre-merger black holes.

The astronomers used a suite of software that simulates black hole mergers. These are extraordinarily complex calculations, involving a careful treatment of general relativity to determine how gravitational waves are generated depending on many different parameters of the event: the masses of the black holes, their spin, the final mass of the merged black hole , and more. When everything is done, these are printed on the pattern of the detected wave, which is called the waveform. This is then compared to the detected waveform to see which best matches the observations.

They go around one hundred thousand simulated models to compare with the waveform of GW190521, and what they found is indeed intriguing: the best fit was one where the orbit was decidedly non-circular: it had an eccentricity of 0.7, this which looked more like an egg shape than a circle.

This is very different from the original announcement and subsequent articles published by LIGO/Virgo scientists. They discovered that the orbit was circular, which also affected all the other parameters. If the orbit is elliptical, things are different.

For example, instead of disparate masses of 66 and 85 solar masses, the new results give the same mass for both, about 78 times that of the Sun. The total mass of the final black hole after the merger is 155 solar, not 142. The new results also give a larger value for the distance to the merger: 8.3 billion light-years versus 6, 2 billion.

So if the orbit was elliptical, we see different results. Corn Why was the orbit non-circular?

They posit that black holes were in a crowded environment, such as near the center of a galaxy or in a tight globular cluster of stars. Encounters with stars or other black holes can kick black holes upside down in their orbit, leaving it elliptical. In fact, this could also explain how these black holes reached such a high mass – they had several previous encounters before the merger, so each grew until they met.

The simulations also show that the black holes had spins that didn’t line up – in other words, their north poles were pointing in different directions on the sky. This produces strong effects in the waveform in the final moments before the merger, which astronomers see in their best-fitting simulations. This also makes sense if these black holes were in some crowded system of some kind. You would expect their towers to be randomly oriented.

All of this is important because we really don’t have a clear idea of ​​what conditions black holes are in before they merge. Did they form together in a high-mass binary star system, slowly converging until they ate each other? Were they in a crowded group, separated until just before they merged? Were they close to a supermassive black hole that we think exists at the center of all major galaxies? Did they have time to circularize their orbit, or was it elliptical? Were their spins aligned or not?

All of these circumstances alter the waveform of the detected fusion, and remember, that’s all we see. This is all happening way too far away for us to get observations of their surroundings, so the waveform is the only map we have to see how they lived. Simulations like the ones done here help us unravel these details.

Perhaps in the near future we’ll see an event close enough and well-identified enough in the sky to get a good look at where doomed black holes have spent their lives. Until then, we have to rely on our knowledge of physics to figure it all out.