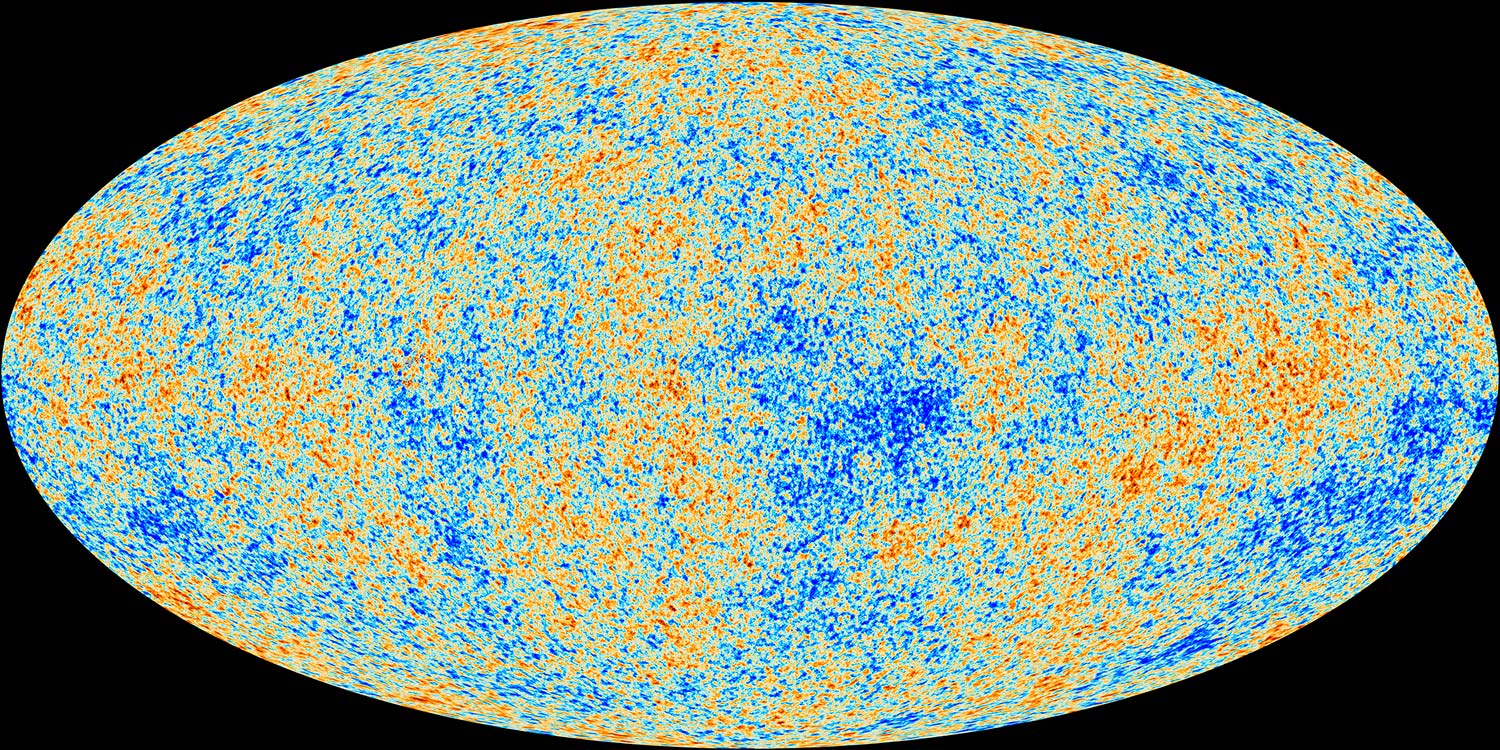 We know dark matter exists – a mysterious substance that is five times more prevalent in the Universe by mass than what we consider “normal” matter, the stuff you and I and everything we see are made of. . We see its effects through its gravity, even though we don’t yet know what it’s made of. Dark matter affects the rotation of galaxies and their movement in gigantic clusters of galaxies.

We also see its effects through the gravitational lens. Mass has gravity, which distorts space. If we look past a massive object like a galaxy to an even more distant galaxy beyond, the mass of the foreground galaxy distorts space, distorting the image of the background galaxy. This more distant galaxy may appear smeared, bent, or even duplicated in multiple images. The gravity of the foreground galaxy acts as a lens, hence its name.

We can measure the light coming from the lens galaxy and measure the mass of its normal matter that way. Then we can measure how much it deforms more distant objects and get its total mass. The difference is the amount of dark matter it contains. This method has worked very successfully in recent years.

But there is a problem. At some distance from Earth, individual galaxies are too faint to see, so we run out of background galaxies to use. It’s embarassing ! We want to see as far as possible, because the farther we look, the farther we see in time; the speed of light is finite, which means the further away we see an object, the longer it took for its light to get here. So, in turn, the further away an object is, the younger we see it.

We want to know what the distribution of dark matter looked like when the Universe was very young, because we think dark matter clumped together shortly after the Big Bang, and as it did, it attracted from normal matter to these clusters, which then formed galaxies. By knowing what dark matter looked like back then, we can better understand how galaxies formed. Not only that, but it takes time for the galaxies themselves to clump together to form galaxy clusters, the largest structures in the Universe. They are so large that the shape, size and other characteristics of the Universe itself can be determined by examining the clusters.

So what if we don’t have very distant galaxies to examine? A team of astronomers has found a way: Don’t use lensed galaxies to measure dark matter. Use the Big Bang background glow instead.

The moment of the birth of the Universe was hot. As the cosmos expanded, this ball of fire cooled. Eventually, it grew large and low-density enough for light to pass through, and it became transparent. This happened a few hundred thousand years after the Bang, and cosmic expansion red-shifted this glow into the microwave part of the spectrum, called cosmic microwave background radiation. This glow was very soft, very similar everywhere you look in the sky. But the gravitational lens of distant galaxies will distort this softness, causing it to clump together a bit.

Astronomers therefore used data from the European Space Agency’s Planck satellite, which measured this glow with great precision, and mapped it against a study of extremely distant galaxies seen by the Subaru Telescope as part of the Hyper Suprime-Cam strategic study program, which mapped many galaxies on a staggering 300 square degree sky – 1,500 times the area of ​​the full Moon! In the end, astronomers observed the gravitational lens around 1,473,106 galaxies (!!) whose distances could be reliably measured. [link to paper]. On average, the light from these galaxies took 12 billion years to reach us, so we see them as they were about 1.8 billion years after the birth of the Universe – much further away than any previously used gravitational lens.

They were able to determine the masses of these galaxies from their degree of focus on the cosmic background and found that they had dark matter halos on average with masses about 300 billion times the mass of the Sun. It’s actually far less massive than our own Milky Way, which is about 700 billion solar masses. But then we see these distant galaxies as they were when they were young, before they could grow to the size of our own galaxy.

They also found something very interesting. Cosmic background radiation is not perfectly smooth; it’s a bit lumpy, which represents a tiny bit of lumpiness in the distribution of matter in the extremely early Universe. These clusters collapsed to form the first stars and galaxies. The standard model of dark matter predicts a certain amount of clusters, but the new measurements get a slightly lower value. It’s close, but not quite the same, suggesting there may be more going on in the Universe than we realize.

It’s very temporary though! The new measurements have a fair amount of uncertainty, so it’s hard to say whether the disagreement is real or not. The good news is that Subaru’s big sky survey isn’t finished yet, but when it’s done, it will cover three times as much sky as was used in this study. This means that they should be able to reduce the uncertainties a bit. In addition, there will be better measurements of microwave background radiation in the coming years, which will also be useful there.

This is all still fairly new; the first reliable measurement of background radiation is only a few decades old, and the use of the gravitational lensing method to obtain the masses of galaxies is only about two decades old. This new method is another step to understand all this. Science is never really done; we keep refining it until we have an understanding that matches observations and makes theoretical sense. Even then it’s not over! There may still be more to discover to improve the measurements.

That’s where we are here: still in the middle of this recipe, trying to write down the basic ingredients and methods that were used to cook the Universe. What’s cool is that we’re making progress. And we will continue to better understand how the cosmos was born.