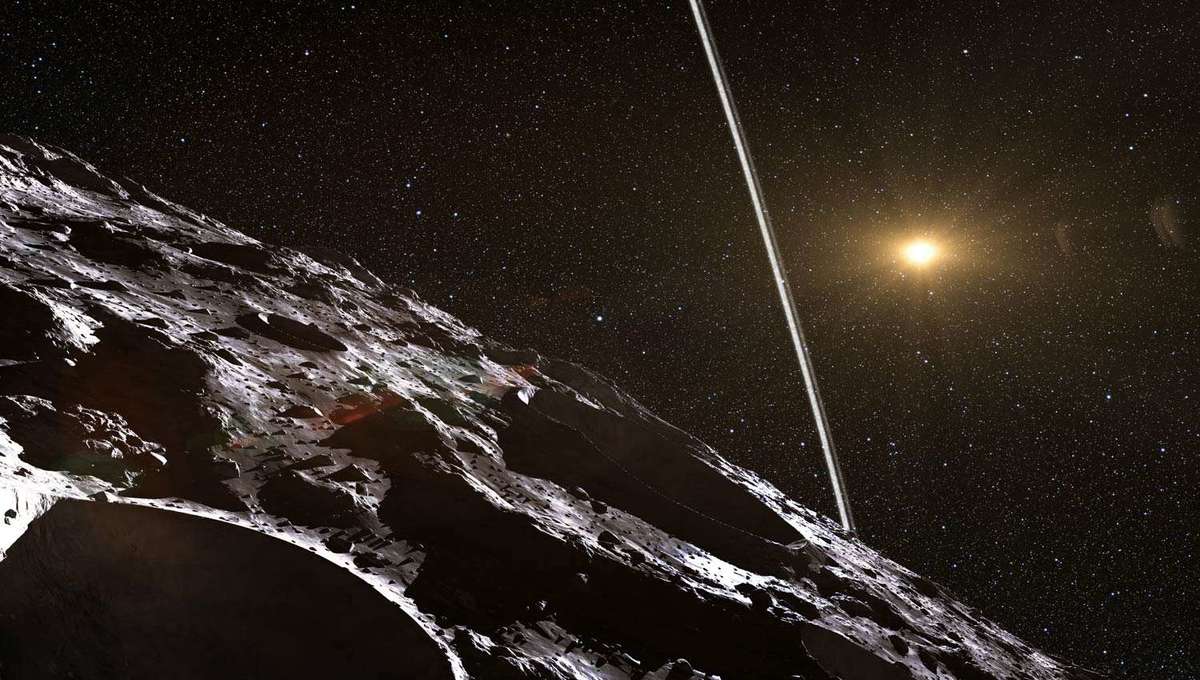 The four giant planets in the solar system have rings. Those of Saturn are the most obvious, of course, but Jupiter, Uranus, and Neptune have them too.

But they are not alone. Two minor planets also have rings made up of countless ice particles. Their discovery came as a shock to astronomers, as it was not believed that smaller bodies could maintain a ring system. Nature, however, is smarter than us and has found a way.

But how exactly? Over time, the rings tend to disperse without moons to guide them by gravity. But what if an object doesn’t have moons? The answer can be: asymmetry. That is, the object in question is not a sphere, but is either crushed in an ellipsoid (like a potato or a European soccer ball) or lumps like mountains above.

The first non-planetary object found to have rings is Chariklo, which is what we call a centaur; an icy / rocky body orbiting the Sun beyond Saturn but within the orbit of Uranus. It likely formed in the Kuiper Belt, the region after Neptune, and migrated by interacting with the gravity of the giant planet.

Chariklo is not very large, perhaps 250 to 300 kilometers in diameter. The exact shape is unknown, as it is so far away that it looks like a point in telescopes. However, sometimes, when viewed from Earth, Chariklo passes directly in front of a star (called stellar occultation), and observers around our planet can time how long the star has disappeared. This can then be used to get a size and shape for the object. It may be a sphere, but it is also possible that it is elongated like a russet potato.

During a 2013 occultation, however, the starlight faded long before and long after the main body blocked the star, and that’s how the rings were discovered. There are two narrow rings, about 390 and 405 km from its center.

Haumea is much taller than Chariklo, approx. 2322 Ã— 1704 x 1026 km. It also orbits much further, on a somewhat elliptical trajectory that ranges from about 5 to about 7.5 billion km from the Sun (outside of Neptune’s orbit). Like Chariklo, his ring was discovered by stellar occultation in 2017. The ring is about 70 km wide and is located about 2300 from the center of Haumea.

So what is it that constrains the rings? Haumea has two tiny moons, but they orbit far too far to affect the ring. Chariklo doesn’t have any moons we’ve seen.

A team of planetary scientists examined this, focusing on the shapes of the two objects to see if it could prevent the rings from dissipating.. They ran computer simulations of Chariklo and Haumea, virtually dumping hundreds of ring particles around each object to see how they behaved. Mostly, they used the non-spherical shapes of the two objects in their computer models. They let Chariklo be a sphere but added a small mountain 5 kilometers high on its equator. For Haumea, they just used the potato shape and left it smooth.

What they found is that the irregular shapes deeply affect the ring particles. The key is a point above each body called the corotation distance: at this distance, a particle orbiting the world circles it once for every time the object rotates once. On Earth, we call this a geosynchronous orbit, and a satellite orbiting the Earth once every 24 hours.

An annular particle in orbit inside this distance is disturbed by the asymmetry of the body (the mountain of Chariklo or the shape of Haumea) and gets closer to finally fall on the body itself. A particle outside this distance is drawn further. But they don’t just keep flowing. A process called resonance kicks in, where the particle’s orbital period is a simple fraction of the body’s rotation (for example, the body rotates twice for every time the ring particle orbits). It’s similar to pumping your legs on a swing to go faster and higher: an orbital resonance pulls the particle down a bit. Any particle that moves outward will essentially stop at the 2: 1 point.

And that constrains the rings. It’s a bit more complicated than that – everything is, it seems – but in the end, the inner and outer edges of the rings are defined by how fast the main body spins and how long it spins. it takes a ring particle to orbit. And you don’t need moons to do it. Just the main staggered objects themselves. This process is also rapid, taking only a few million years (which on a cosmic timescale is quite fast).

This is a pretty wild result. This means that there could be a lot of objects on the solar system with rings, in fact. This study doesn’t talk about how the rings formed in the first place, but an obvious genesis is due to a collision with a smaller body that throws a lot of ejected debris into space around the object. This would flatten and spread out, forming a large ring which then narrows as the resonance effect kicks in.

There are certain ideas that the two moons of Mars, Deimos and Phobos, formed this way. Has Mars ever had a ring? Besides, did the Earth, after something huge, collide with us to form the Moon? Maybe, for a while.

Another funny point: a lot of the material from the ring falls on the body, and this collision is usually quite slow for something as small as Chariklo or Haumea. This material would survive the impact and pile up, possibly forming a ridge around the object’s equator. Well, Saturn’s moon Iapetus has exactly that kind of weird crest. A recent hypothesis is that it also rang for a while. A ringed moon around a ringed planet!

Nature is not only smarter than us. It is also infinitely cooler.

More rings can be found as we see more of these little bodies of occult stars, or see them up close with spacecraft. And I wonder how many ring-less objects we will find that will have equatorial ridges. Rings, at least temporary, may be the rule and not the exception in the Universe.

How did this collision between neutron stars impact the history of astronomy? – The clear people