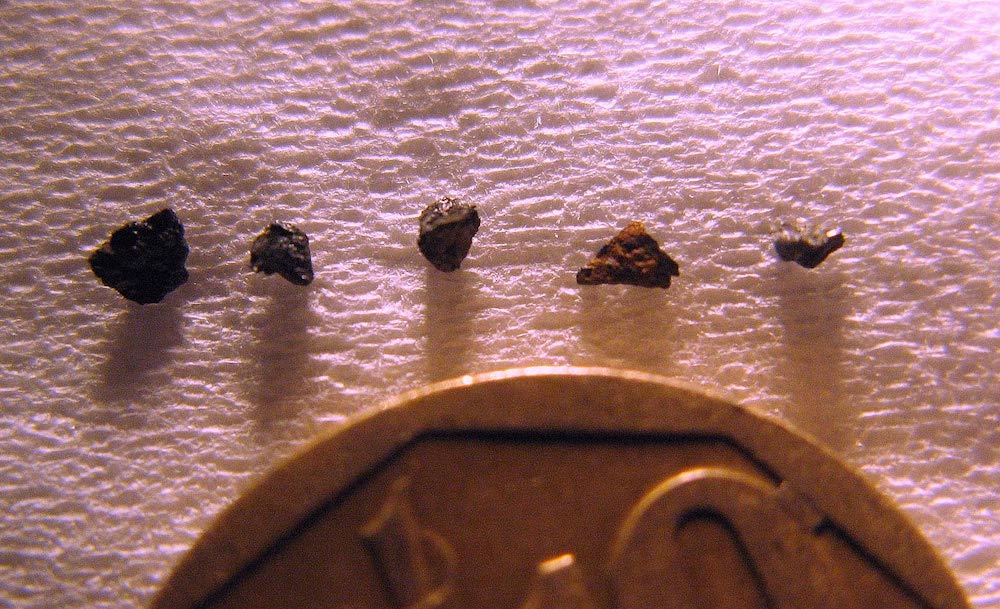 A very strange meteorite discovered in western Egypt in 1996 may contain tiny bits of debris from a supernova, and not just any supernova, but a supernova created by the explosion of a white dwarf, the remnant core of a formerly Sun-like star. If so, it would be the first evidence of a relatively nearby supernova of this type that occurred before the birth of the Sun and the planets. [link to paper].

The stone is called Hypatia, and immediately she was considered an eccentric. The idea that it was even a meteorite was at first disputed, but laboratory studies showed that the structure and elemental composition was similar enough to a type of meteorite that it appeared to be d extraterrestrial origin.

This type of meteorite is called carbonaceous chondrite. These are typically high in carbon and many contain chondrules, which are tiny, generally rounded grains of material that formed early in the process that formed the Sun, planets, asteroids, and everything else in our planet. solar system.

A specific type, called group CI, is very poor in chondrules or has none at all, and Hypatia appears to be of this type. This group of meteorites is very old, which means that they formed very early, before the Sun and the planets merged from a cloud of gas and dust, the solar nebula. In fact, the abundance of a xenon isotope in Hypatia indicates that it formed less than 40 million years after the start of the solar nebula’s collapse.

Examining Hypatia is difficult because only a very small fragment weighing 30 grams – just over an ounce – was found. Yet studies have shown that it contains two different types of bulk material. One appears to contain no heavier elements than oxygen, while the other contains measurable amounts of heavier elements like iron and nickel.

These elements are really interesting: they form when stars explode, becoming supernovae. The explosion is so powerful that thermonuclear fusion occurs in the ejected material, creating heavy elements.

However, it is the relative abundances of these elements that are important. The amount of silicon versus iron, for example, can tell you more precisely about the origin of the material. In the new study, scientists found that these Hypatia grains were extremely deficient in silicon and manganese compared to iron, and that is very strange.

By examining the elemental creation processes in different types of supernovae, scientists have been able to rule out the type that arises from the collapse of the core of a massive star at the end of its life; this does not render the elements in the correct proportions to match Hypatia.

Another type of supernova, called Type Ia, occurs when an extremely dense white dwarf – the compressed core of a star like the Sun remains after the star transforms into a red giant and carries away its outer layers, exposing the core to space – accumulates material from a binary companion star. It can accumulate so much matter that the white dwarf’s extreme gravity ignites the fusion, creating so much energy that the star tears apart and explodes. There are different subclasses of this type of supernova, including one where the white dwarf accumulates a helium shell from the other star, which when it merges triggers the much more energetic fusion of the carbon inside the dwarf.

It’s not an extremely common type of supernova – although the very first extragalactic supernova ever seen, SN 1885A in the Andromeda Galaxy, was of this type.* – but they do create a unique elemental abundance, and the models show that this matches Hypatia’s enough to be highly suspect.

The high carbon content of Hypatia may have a similar origin. Before becoming a white dwarf, the star is first a red giant, and these can contain a lot of carbon which it expels into space, forming soot grains of matter generically called dust. The supernova may have occurred inside a cloud of this dust, and these aggregated. Eventually, this material found its way to the nebula from which the solar system formed. It’s not too unusual; we know that some of the carbon in the meteorites came from other stars that also polluted the solar nebula.

All of this is not yet – excuse the expression – set in stone, however. Hypatia is small and difficult to examine in a standard way, and some of the conclusions drawn run counter to standard ideas. For example, current thinking is that most of the material in the Sun Nebula was well mixed, but the elements inside Hypatia are not very well mixed. It’s not a deal breaker, but it does indicate that this new study—again, forgive me—is going against the grain.

If this idea holds, it will be the first direct evidence of a nearby white dwarf supernova that occurred some time before our planet was even formed. It may not have been the only supernova, or the only source of interstellar matter that seeded our birth nebula, but being able to pin it down would be very telling of what happened in space to form our solar system.

Remember, everything you see around you – including every atom inside you – was made from the material of this pre-solar nebula. As Carl Sagan said, you are literally a star.

And you are an exploded star. Supernova stuff. It’s an amazing thought, made even more amazing by the fact that it’s demonstrably true.

* I happen to know this because the very first article I co-authored was on 1885A, and although my adviser Roger Chevalier did the lion’s share of the work on that article, I read a lot about those events and learned a lot about them. at the time.

The most mysterious asteroids in the solar system