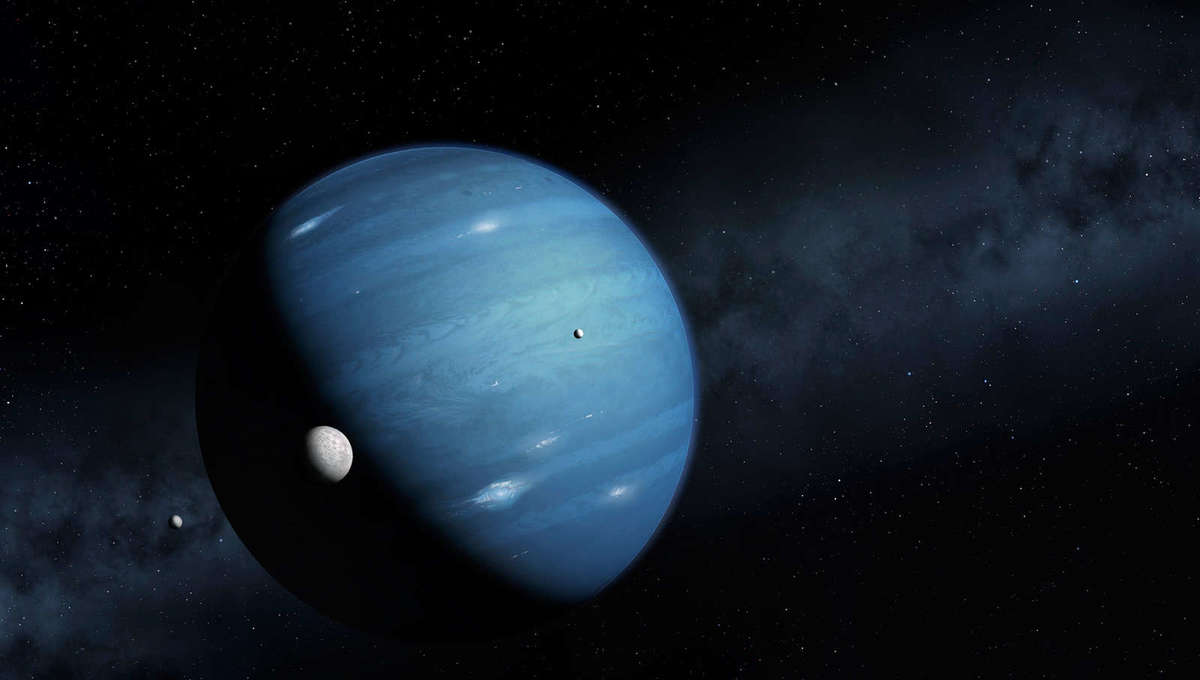 Bad astronomy | If Planet Nine exists, a map has been created to help find it.

Do you want to be the first person in 175 years to discover a new planet in our solar system?

Well that’s not all this easy. You will need a huge telescope, a lot of time, and at least some understanding of what you are looking for and why. Let me help.

Over the past twenty years, a growing number of astronomers have believed that there could be another large planet in our solar system far beyond Neptune. Nicknamed Planet Nine*, its existence is deduced from the behavior of a group of icy bodies which also orbit the Sun.

Called Kuiper Belt Objects (or KBO), they travel in elliptical orbits that can take them hundreds of billions of kilometers from the Sun. You would expect the orbits of these objects to be random, tilted, and turned in all directions. However, that is not what is found: instead, the major axes of these known and distant KBO orbits are oddly aligned, pointing very roughly in the same direction. In addition, the orbital planes of these objects are also roughly aligned.

This has been a controversial claim, and many other astronomers have said it could be due to a bias in the way we search for these objects, and others showing that while a bias may exist, it cannot explain the alignments of the orbits of these objects.

The best explanation for this phenomenon is therefore the existence of another planetary body deep in the outer solar system, probably tens of billions of kilometers away. When it orbits the Sun, its gravity affects the objects around it and, over time, can align their orbits as seen.

Alright, great! So where is he?

In a new article, astronomers Mike Brown** and Konstantin Batygin tried to calculate exactly that. They looked at the shapes of the orbits of Kuiper belt objects and the known biases of the observations to try to determine where planet nine is likely to be in the sky. They have run over a hundred physical simulations of tens of thousands of KBOs, allowing their orbits to be affected by Planet Nine for 200 million years. They used different masses for Planet Nine along with different orbital shapes and orientations, then looked at the results to see which were consistent with what is actually seen in the sky for known KBO orbits.

What they found is essentially a map of the likely location of planet nine.. That’s not a real map of its location, where the chances are higher to find it.

The top card is what we call a projection of Mollweide the entire sky, mapping it to an ellipse (much like some Earth maps do). From left to right on the map is east to west in the sky, the north celestial pole is at the top and the equator crosses the middle. The curved black line is the plane of the solar system (called the ecliptic) and the plane of the Milky Way is located between the two remaining black lines.

The probability of the location of planet nine is shown in color, where blue is very low and red very high – the fuzzy, curved color line essentially plots the probable orbit of the projected planet in the sky and the spot. red on the right is the best bet to seek the planet. It is no accident that this is the probable location in the planet’s sky. aphelia – the point in its orbit where it is furthest from the Sun. Planets move more slowly when they are further from the Sun, so they spend more time near aphelion than they do at perihelion, the point closest to the Sun when they are also moving the fastest.

This card very roughly skyward near the constellation Taurus, but again, this is only a likely location. It could be anywhere in a wide swath of sky. This makes research difficult.

The central part of the graph shows the probability of the current distance to planet nine (measured in astronomical units, or AU, a unit convenient for astronomers where 1 AU is the Earth-Sun distance, 150 million kilometers) from its east / west longitude on the sky (what astronomers, for historical reasons, call Right Ascension, or RA). The highest probability is a distance of 380 AU, or 57 billion km, although there is a wide range of probable distances (about 15 billion km). The bottom map shows how bright the planet can be (in magnitudes, another handy unit for astronomers; brighter objects have a lower magnitude). The most likely magnitude is around 20.5, which is weak: The faintest star you can see with the naked eye would be over 600,000 times brighter.

Now, if you’re anxious to grab a scope and go take a look, be warned: even though Planet Nine is closer and brighter than you expected, it will take a large observatory to find it, and even then sweeping the sky for months to search for the weak, slowly moving object. If it is weaker than expected, you may need an 8-10 meter telescope to find it.

There are telescopes like this coming online soon! For example, the Vera Rubin telescope is an 8.4 meter that will watch the sky and could very well find Planet Nine.

The luminosity of the planet is quite uncertain; it depends on its size and degree of reflection. They find the likely mass of the mast to be 6.2 times the mass of Earth (with some uncertainty), but it’s hard to know how big the planet is given this. Its composition is also unknown. If massive enough, it could be a gas giant, but if it’s at the lower end of the mass range, it could be a solid world of ice and rock. .

The overall point here is that if they are correct, we now have an idea of â€‹â€‹where to look. Brown and Batygin have already searched for it using the Subaru Telescope, but the sky is wide and the planet nine – if it exists, notice – is vanishing, so it may be some time before it does. be found.

But will it not be a day? We are still learning about our solar system, from its inner reaches to its outer limits. There is enough space to hide an entire planet there, but hopefully not enough to hide it forever.

*It is difficult, if not impossible, to define what a planet is, but most astronomers I know have no problem saying that Neptune, the eighth planet from the Sun, is the most distant planet currently known.

**In the interest of full disclosure, Mike Brown is a friend of mine.