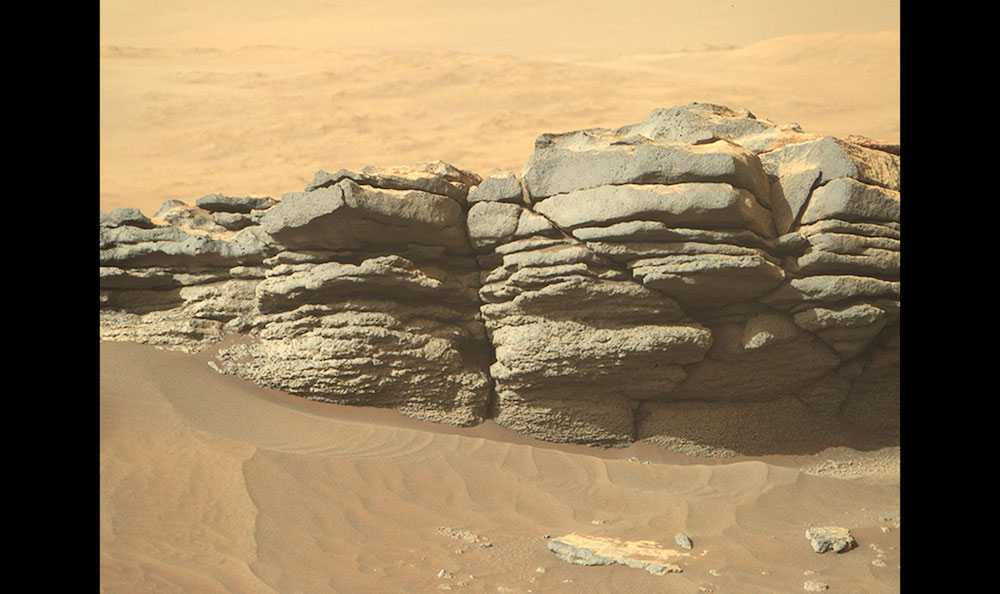 Since landing on Mars in February 2021, the Perseverance rover has been exploring Jezero Crater, a 50 kilometer wide impact feature. The purpose of the mission is to search for evidence that Mars once had or may still have areas that can support life.

Jezero was chosen as the landing site because it was very clearly a lake of stagnant water at some point in the past. Orbiters have detected minerals forming in the water there, and in the northwest part of the crater are the remains of a huge river delta formation, sediments deposited when the water flowed in the crater eons ago – think of the Nile Delta and you have it.

You might expect, then, that the bottom of the crater would be loaded with sedimentary rocks; the minerals deposited as silt and grains of other material settled into the lake bed, were compressed and formed layers of rock. But the geology is sneaky, even – or especially – on Mars, and can fool you. Not everything happens in chronological order

One of the first places the rover visited was a patch of rock called the Séítah unit – which means “in the middle of the sand” in the Navajo language, which is fitting – known to have some of the oldest rocks in the crater , including bedrock and sediment. layers nearby.

Four research papers have been published in the journals Science and Science Advances with details of what Perseverance found there [links to Paper 1, Paper 2, Paper 3, and Paper 4]. They generally deal with the question: what do the rocks above and below the surface tell us about the geology of the area and the chronology of water in Lake Jezero?

Perseverance has many scientific instruments on board to examine Mars, and they each tell a story about the rocks that can be used to create a cohesive picture. What they found was that the area is rich in olivine and other magma-formed minerals, meaning they were looking at igneous rocks, not sedimentary ones, and that although they are under a lake, these rocks had not been strongly modified by interactions with water.

Using the Planetary X-Ray Lithochemistry Instrument (or PIXL), scientists examined some rock outcrops at Séítah and found that they were of igneous origin. They saw olivine crystals there and found that they were about 1-3 mm in size. Olivine is a relatively simple mineral that forms in magma as it cools, and the grain size depends on how long it takes to cool. If the magma flows to the surface and cools quickly, the crystals do not have time to form and the grains are small. Those of the size found by PIXL indicate that the magma cooled slowly, so it was probably still below the surface when it hardened.

They also find evidence of interaction with water in rocks, but it is not extensive. This agrees with one of the other papers that found rocks at Séítah containing carbonates, minerals consistent with the rocks being exposed to carbonated water, but again under water-poor conditions. The cracks in the rocks were filled with minerals that were probably deposited by very salty water later.

From orbit, it was hard to tell what was forming these rocks: sediment from the lake bed, ash from volcanic eruptions, magma seeping from below, or stuff blown by the Martian wind that then turned into rock. All that was known was that the crater formed between 3.82 and 3.96 billion years ago.

But with Perseverance in place, a clearer picture emerges. The bedrock is igneous, formed from magma early in Mars’ history. An asteroid impact carved out the huge crater, exposing much of the bedrock, and possibly more magma erupted afterwards.

Then the water. Much of it certainly flowed from the northwest, forming the delta, and there are overflow features to the southeast as well. These indicate standing water, although the duration is still unclear. Over the seasons — centuries? Millennia? After? — the sediments accumulated at the bottom of the lake, covering the bedrock.

But then disaster. Something has changed on or more likely inside Mars. One idea is that the small iron core has cooled enough to solidify. When this happened, the Martian magnetic field shut down, and until then it had protected the planet from the onslaught of subatomic particles from the solar wind. The wind then stripped much of the planet’s atmosphere and surface water either boiled off in the low pressure or seeped into the surface (though it’s unclear how much found its way down).

Jezero Lake changed back to just Jezero Crater when the water dried up. It was billions of years ago and the wind, though weak, was relentless. Over the eons, erosion removed much of the softer sedimentary rock, leaving behind the harder igneous rocks. Some of them would have been just below the sedimentary layers, so they had some interaction with water, but not much, explaining the minerals Perseverance found there.

This is both good and bad for scientists. Igneous rocks are great for getting things like the timeline of geologic events because the crystals keep track of when they formed through things like radioactive decay. However, they would contain no actual information about any life that may have existed in the lake; they formed too early.

On the other hand, all is not lost. In April, Perseverance reached the base of the immense sedimentary delta. The rocks he finds there will be more difficult to find an age, but could retain evidence of life if they existed in the ancient lake.

The rover could find this evidence on its own, but it’s also collecting rock samples and storing them for an ambitious mission to send them to Earth for study here. The plan is to send an orbiter and a lander in 2027 and 2028; the lander will collect the samples, launch them to the orbiter, which will then return to Earth with them in 2033. It’s a complex and difficult undertaking, but the payoff could be the biggest in history: Proof of life on another world.

Or it may show that Mars never had life in the lake. In any case, it will be very, very important to know. And we are about to find out.