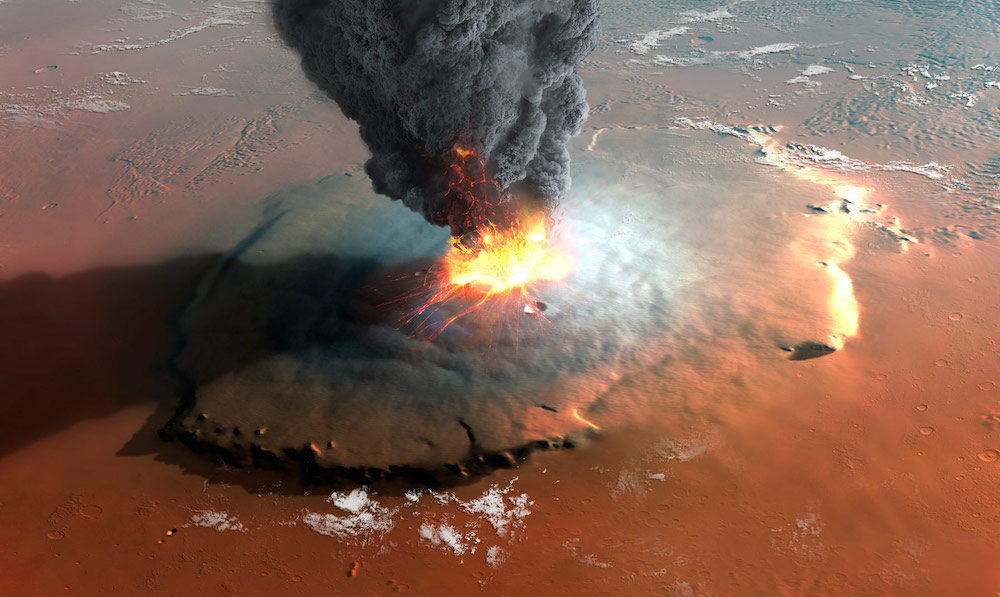 In the distant past, Mars was extremely volcanic.

In some ways this is obvious. The Tharsis region, a little smaller than the continental United States, has 12 major volcanoes, including Olympus Mons, the largest known volcano in the entire solar system. It is 22 km high and 600 km wide, the width of Colorado.

Additionally, the planet’s surface is covered in basalt, a dark gray volcanic rock. It’s everywhere, indicating that most of the surface rocks were put in place by volcanoes. Later this was modified by air, water – almost all gone now, but 3 or 4 billion years ago Mars was quite wet – and asteroid/comet impacts.

Nili Fossae is a region of Mars characterized by long concentric depressions in the ground called graben. These can be stress-induced cracks from nearby impacts or swelling of the surface due to subsurface activity. It’s unusual for Mars in that it’s very rich in the mineral olivine, which forms on Earth in the mantle.

Presumably on Mars, this was also the case. It can be ejected by volcanoes or carved out by large impacts and distributed around. It is also rich in carbonates, another mineral found in volcanic eruptions.

The Jezero crater is in Nili Fossae, which is convenient: this is where the Perseverance rover is currently moving. This means that mineral assays taken from orbit can be compared to literal ground truth.

And this is where the fun begins: another crater was also found to be abnormally rich in olivines and carbonates: the Gusev crater, where the Spirit rover explored from 2004 to 2010. Nili Fossae and Gusev are the two regions most richest in olivine on Mars.

What is strange is that they are 6,000 kilometers apart! It is unlikely that they had the same source of olivines and carbonates, which implies that whatever made them so must have happened in at least two places on Mars, which in turn implies that this was an important process in Martian geology.

So were these minerals gently deposited on the surface of Mars in these two regions, or were the deposits more violent?

Regarding Nili Fossae in particular, there has been a lot of debate about it. But new work strongly suggests it was the latter: whatever enriched these two wildly separated areas was very violent. And not only that, but Many times violent.

A team of scientists examined images of Jezero and Gusev provided by the rovers using their close-up cameras, getting magnified views of rock structures [link to paper]. Curious dark streaks have been observed in the rocks of Gusev, shaped something like flames. This type of structure is called fiamme (Italian for “flame”) and indicates pumice rocks that have been crushed under pressure and heated. This is also seen on Earth.

It’s interesting! This kind of thing happens during violent volcanic eruptions called pyroclastic flows, where superheated gas and ash shoot out of a volcanic vent and screech down at speeds of hundreds of miles per hour. This material is deposited again and again in layers during episodic energetic eruptions, so you end up with a bizarre mixture of igneous and sedimentary rocks: they are volcanic, therefore igneous, but stratified, therefore sedimentary. The weight of the layers above plus the heat can weld and deform the pumice stone to make it flame.

This type of rock in general is called ignimbrite — from the Latin fire (igni) and rain (imbri), thus a shower of fiery debris. This would imply that the Nili Fossae and Gusev deposits were indeed created during terrifying events.

There is more. At Nili Fossae, orbital images show long, roughly parallel cracks in the rock surface that geologists call joints. This is common in the cooling of ignimbrite, which contracts on cooling and generates a series of joints. This was also obvious to scientists, who noted that the same is seen on Earth, always in welded ignimbrite deposits, again strongly implying that these rocks were not smoothly made.

They also advance other more subtle arguments, but in the end all their evidence points to titanic and repeated violent eruptions. I will note that the evidence supports this, but it is circumstantial. There could be other ways to make these structures on Mars that we don’t yet know about. But still, if I were to bet, it looks like good odds.

No doubt we will learn more as new missions are sent to the red planet. The story of Mars is, like Earth, a study of long, slow processes punctuated by sudden, frightening ones. Volcanism played an outsized role, so just knowing what type of volcanism it was is a good step forward.

And we still don’t know what happened to its air and water. Much of Mars has been mapped, and in great detail, and we are even learning about its interior. But it’s a big planet. Smaller than Earth, but it’s far away and difficult to study. Scientists are getting better all the time, and this flood of data from the last few years will take decades to sort through. This argument is not over yet, and even when it is, it will have to fit into the bigger picture of Mars. There is much more to discover.