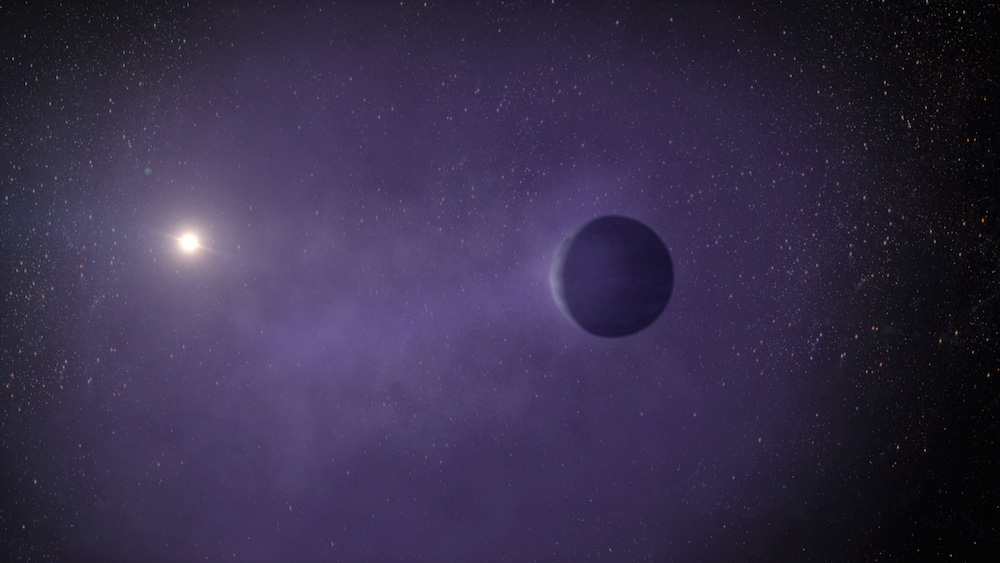 In our solar system, the Earth is the largest of the telluric planets; small rocky worlds. The next largest planet in size is Neptune, a gas giant four times the diameter of Earth.

When we started finding exoplanets – alien planets orbiting other stars – we started finding planets in that mass gap. Over time, enough have been found to get statistics, and these planets fall into two distinct mass ranges: “super-Earths” which are up to about 1.6 times the diameter of Earth, and the “mini-Neptunes”, which are 2 to 4 times our diameter. width of the planet.

But… that still leaves a mass gap! Where are the planets between 1.6 and 2 times the size of Earth?

One idea is that when a forming planet reaches about 1.6 times the size of Earth, its gravity is strong enough to really start sucking gas around it and it becomes a mini-Neptune (or larger). This may work for planets further away from a newborn star where it’s cold and abundant in gas, but what about those closer? An idea to explain those is that if a planet 1.6 to 2 times the size of Earth is too close to the star, it is so hot that it cannot retain the atmosphere it already has. It leaks gas into space, losing mass and size until it becomes a super-Earth.

The latter was only an idea until now, but two newly discovered exoplanets around different stars both appear to be mini-Neptunes actively losing their atmosphere and are on their way to becoming super-Earths. This has never been seen before.

In both cases, the planets transit their host stars, passing directly between us and the star, creating a mini-eclipse. We can’t see the planets directly, but when starlight passes through the planets’ atmospheres, different elements absorb specific wavelengths (colors) of light. For example, helium absorbs in the infrared and hydrogen in the ultraviolet. Looking closely at these colors, it is possible to see a dip in starlight brightness. Not only that, but as the gas moves away from the planet, we see a Doppler shift in the color of the light, and, measured very carefully, this can reveal how much gas is leaking onto the planet and how fast.

Exoplanet HD 63433c orbits a young Sun-like star about 73 light-years from Earth. Astronomers observed it using the space telescope imaging spectrograph on Hubble (link to the article). It’s 2.67 times the diameter of Earth, so it’s a mini-Neptune, and it only takes about 20 Earth days to orbit the star once. That puts it just 22 million miles from the star, so it’s to cook‘. So hot, in fact, that it should lose air to space despite being about 7 times the mass of Earth.

Sure enough, they see the hydrogen absorbing the light from the star, and from the Doppler shift, it is moving away from the planet at 50 kilometers per second – 180,000 km/h! The planet loses about 10% of Earth’s gas mass every billion years. At this rate, it will take some time to lose enough gas to become a super-Earth, but some planets have time. Interestingly, there is another planet in this same system, a somewhat smaller mini-Neptune closer to the star, and no loss of atmospheric hydrogen has been detected from it. It’s probably so much hotter than it is already lost as much gas as possible. In this case, some planets ran out of time.

The other exoplanet observed by astronomers is HD 73583b, which is 2.8 times the diameter of Earth orbiting a slightly cooler star 103 light-years away (link to article). The planet circles the star every 6.4 Earth days, so again it’s close, just 9 million miles from the star and very hot. Using the Keck telescope’s NIRSPEC spectrograph, they detected that helium was leaking from the planet, spreading out at about 20 km/sec. It loses gas at about twice the rate of the HD 63433c, so again over time it will likely become a super-Earth.

Oddly, in this case, the gas seemed to be more red-shifted, indicating that instead of being blown away from the star – slight pressure and the stellar wind would do this, just as they push the tail of a comet – the gas is heading towards the star. It is difficult to explain this behavior. Either it’s observational error, which seems unlikely given the care they’ve taken to process the data, or there’s some weird physical mechanism at play here. Further observations should help the team understand what the planet is doing.

Both planets are puffy, larger than expected, because their atmospheres are enlarged by absorbing so much energy from their stars, much like the air inside a hot air balloon expands when heated. We’ve seen puffy planets before, but they’re all the size of Jupiter with masses hundreds of times that of Earth. These two have a much lower mass, and this is the first time this has been seen on a planet of this size. Given the observations, it does indeed appear that puffy mini-Neptunes become super-Earths over time. It’s unclear how much atmosphere could possibly remain after the process is complete, but it would certainly be much thinner.

I will note that there are no super-Earths or mini-Neptunes in our solar system – otherwise we would give them a different name! But they are by far the most common type of planet we see around other stars. It’s unclear why we don’t have one – except for Planet 9, if it exists – but it’s weird. We use our own planetary system as a model to understand all others, but it’s entirely possible were the weird ones. It just depends on your point of view.

Space missions to watch in 2022