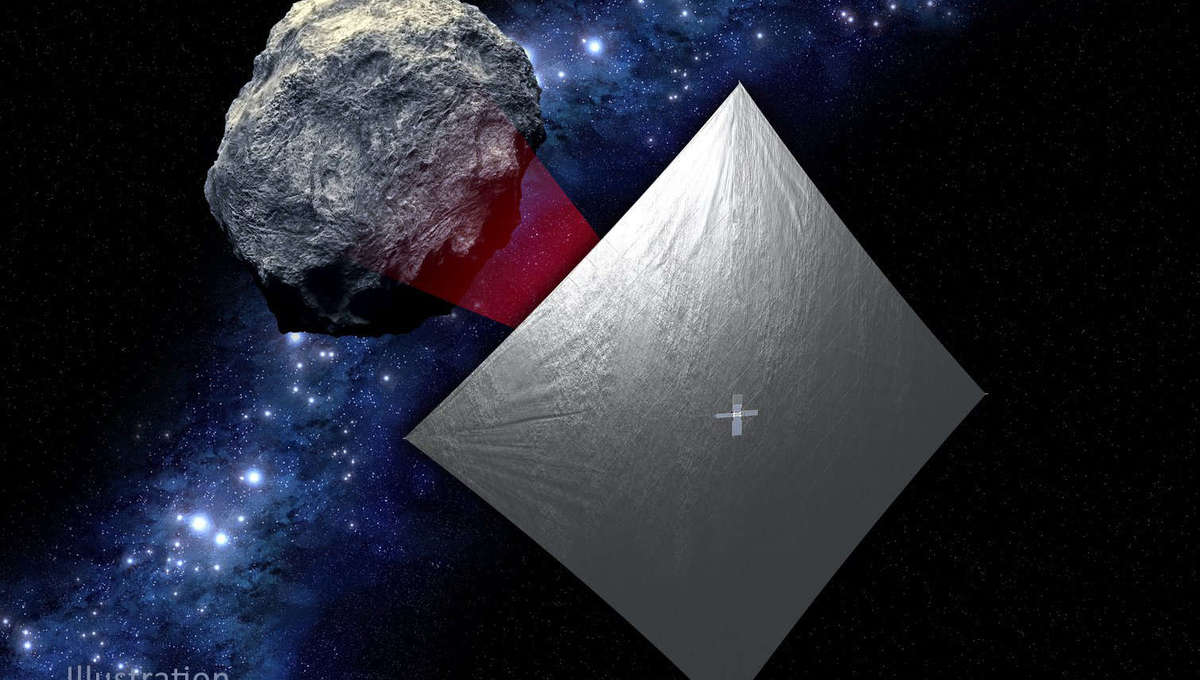 Well it’s interesting: NASA launches spaceship to explore asteroids on Artemis I, the first test flight in their attempt to return to the moon.

The spaceship is called Near-Earth Asteroid, or NEA Scout, and get this: it uses a solar sail for propulsion, the first interplanetary mission to do so!

OK, first: Artemis I is a full test flight of the Space Launch System (or SLS) and the Orion capsule. It will be unmanned and send Orion into orbit around the Moon for about a week before returning to Earth. Its launch is scheduled for November, but we’ll see; I am NOT a fan of SLS and given the large number of delays I doubt it will take off this year. But it’s likely to launch next year if not this one.

Orion is mounted to the top of the rocket using an adapter ring, and there are 13 smaller missions that will be mounted inside and deployed from the ring, including NEA Scout.

Scout is a CubeSat, a small spaceship. CubeSats are standardized boxes 10 centimeters (!!) square, small enough to fit in the palm of your hand. They can also be assembled to make a larger configuration; Scout is six of them in a flat rectangular prism measuring 10 x 20 x 30 cm, roughly the size of a large shoebox.

Don’t be fooled by the size. It uses four telescopic aluminum rods that will extend 6.8 meters long (the height of a two-story house), which will unfurl a solar sail made of some kind of fancy plastic (aluminized polyimide) which is extremely light because it is only 2.5 microns thick. For comparison, a typical human hair is 100 microns thick. So, wow.

Once deployed, the sail will use sunlight for propulsion. Although photons don’t have mass, they have momentum, so when they hit the sail, they kick it. This is why the sail is so thin but big (85 square meters) and the spaceship small and light; the lower the mass, the higher the acceleration. Although the acceleration is incredibly low, it is continuous. It adds up, so even if you don’t go fast at first, you can speed up over weeks and months.

The asteroid’s target is not yet defined, as the launch date is uncertain and everything is moving in space. After launch, it will be placed in orbit around the Sun (called a heliocentric orbit). After that, Scout will use a cold gas thruster to position himself, unfurl the sail, then go.

Solar sails have already been tested in orbit and they work! In fact, when The Planetary Society has tested its solar sail, I’ve written about how it all works, so go read this article to learn more about Photon Momentum, Sails, and CubeSats.

The plan is for Scout to match speeds with a 100-meter asteroid, with the goal of obtaining images with a resolution of 10 to 50 centimeters. We have never seen such small asteroids up close, but they are big enough to do a lot of damage if they were to impact our planet. It is important to know more about them! They are probably piles of rubble – like Bennu and Ryugu, which are between 500 and 900 meters in length – meaning a jumble of very fragile rocks held together by their own gravity. Deflecting such an asteroid is complicated and we need to understand them better in case we need to repel one.

The other dozen secondary spaceships to be launched on Artemis I look quite interesting too. Several will go into orbit around the Moon; two will search for water ice in deep, dark craters, while another will map hydrogen (which, really, is also looking for water ice). Japanese space agency JAXA will also have a lander on board measuring radiation on the lunar surface – a good idea since people will one day be living there.

As for the main mission to the Moon, if all goes according to plan, Artemis I will lead the way to the sequel, Artemis II, a crewed mission that will fly over the Moon on what is called a free return path, which means they will dive low enough on the lunar surface (around 7,500 km) for the Moon’s gravity sends them back to Earth without them having burned the engine – that way, if something goes wrong, they’ll at least go home. They will go into high orbit around our planet, then fall back to Earth to land in the Pacific Ocean. The nominal mission timeline is 10 days, and it’s slated to launch in June 2023 (but again, we’ll see).

All of this is quite ambitious, although achievable, otherwise NASA would not have continued these missions. The overall design of Project Artemis to Return to the Moon has changed several times, and the original 2024 deadline for bringing human boots to the surface was both arbitrary and dangerous, and clearly for political purposes. This made the architecture of the project – the hardware needed to get people to the moon and return them safely – difficult to pin down, especially with SLS never having flown and with Congress controlling the budget. To be honest that the architecture is still not fixed, with contracts still in progress. I find that a little worrisome given that this is supposed to be a lasting mission. Something like this can’t, shouldn’t be rushed.

So again, we’ll see. As it stands, the science aspects of this mission at least look pretty cool, so I’m looking forward to them, especially seeing a football-sized asteroid up close. It will be amazing.