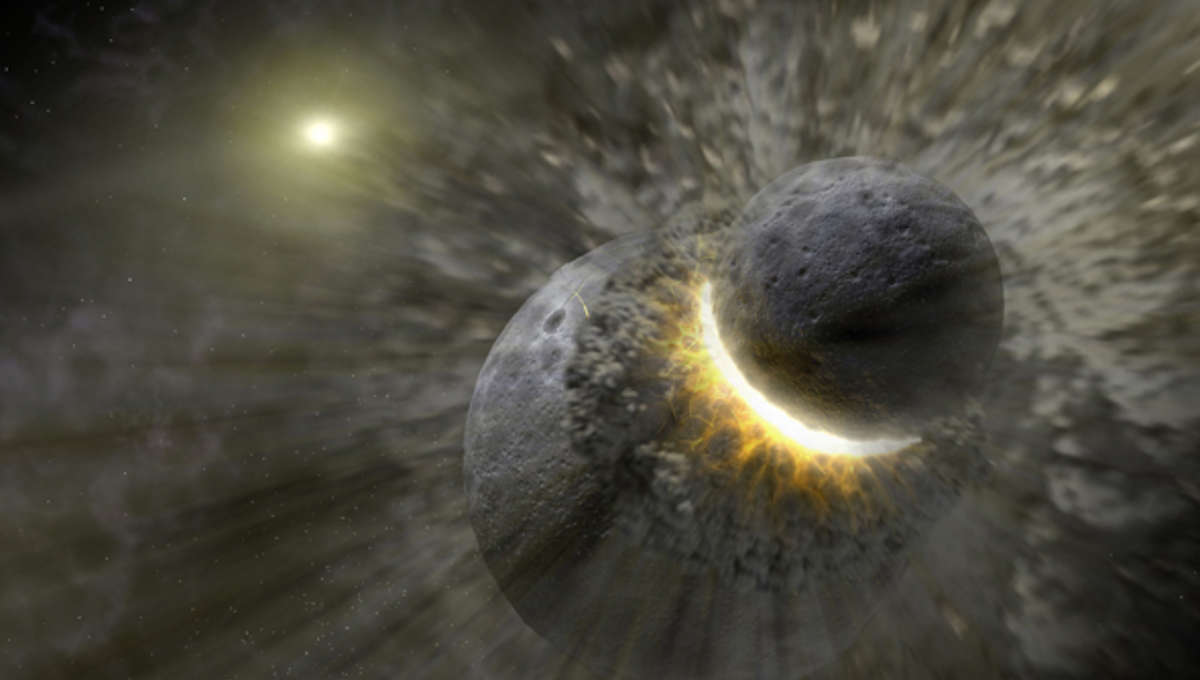 A big problem when trying to figure out how the planets were formed is that it happened 4.55 billion years ago. The file is a bit hazy now.

We have a lot of science and understanding of the planet building processes, and can model them on computers by solving the various equations involved. But these models are only as good as the math and physics that make them up. If there is a process involved that we don’t know about, then models that don’t include it could very well be bogus.

This has been true for decades, and as scientists learn more, models improve and our understanding grows.

And now a team of planetologists thought of something new this can be an important effect that has not yet been included in these models. The current thought is that towards the end of the process of forming planets, they develop by colliding with other large objects, other forming planets. These huge collisions produce a lot of debris that blows away, but overall the remaining object is a bit larger.

The new idea is that this type of collision is not enough and that it is unlikely to be the end of the event. Scientists have examined what is essentially a hit and run: The smaller object (called the impactor) comes in, hits the bigger one (the target) colossally at an angle, but then most of it continues in space. Due to the orbital mechanics, he is likely to return to the crime scene some time later and become a repeat offender, again colliding with the planet.

It may sound like nitpicking, but it can be very important, as the impactor may not hit the original target again. It could hit another growing planet, and it ends up explaining something about Earth, Venus, and even the Moon.

They performed simulations using a proto-Earth at its current distance from the Sun (150 million km) and a proto-Venus at its current distance (about 105 million km). They then slammed their sim-Earth with impactors of different sizes at different speeds to see what happens. In a previous article, they found surprising results: After a grazing impact, between one and two thirds of the impactors orbit the Sun for a certain time before impacting the Earth a second time. They also found that among those who do not return, most hit Venus. In fact, Venus is about as likely to be the second target as Earth.

In a second post just published, they take a look at how this affects Venus in relation to Earth. Venus is very similar in size and mass to Earth, but has some profound differences. For one, it has no moon, and for the other, it spins (turns on its axis) extremely slowly, once every 243 Earth days. On top of that (or bottom I guess) it turns upside down. It was hard to explain if you were content with big impacts forming Venus. Many ideas have been put forward (such as friction with its thick atmosphere or gravitational interactions with the Sun) and some explain these strange features well, but the authors here wondered if these hit-and-run impacts could occur. .

The idea is that an impactor from the outer solar system will tend to see Earth first and collide with it before meeting Venus. Therefore, Earth acts as the â€œvanguardâ€ for Venus, protecting it from the initial impact (while Earth itself does not have a planet in the front line). Venus is then touched by the remains of this impactor, merging with it. These two collisions have different impactor masses, speeds, and even directions, which could lead to the differences we are currently seeing between the two planets.

This idea can also help explain the quirks we see in the Moon. The current pattern is that something the size of Mars or larger slammed (named Theia) onto Earth at an angle, detonating a lot of debris. This debris is a mixture of the upper layers of the Earth and those of Theia, while Theia’s core has sunk deep inside the Earth. This explains a lot of what we see about the behavior of the Moon, but leaves some puzzling mysteries. For example, if Theia’s crust and mantle formed a large part of the Moon, why does the composition of the Earth’s mantle match that of the Moon in so many ways?

In another article, the authors examine a hit-and-run scenario for the lunar formation. They use a slightly faster impact than most other research, allowing Theia to strike Earth but continue in its orbit around the Sun. After a few hundred thousand to a million years, it impacts the Earth again, this time more slowly. This second impact generates a huge disc of debris that is two to three times the current mass of the Moon, usually tilted at a wild angle to Earth’s orbit.

The Moon is currently orbiting the Earth with a significant orbital tilt, which was difficult to explain until now. Hmmm. Two impacts also tend to lead to a better mixing of the two worlds, which could then explain why the composition of the Moon is similar to that of the Earth’s mantle.

There are problems. For example, it is just as likely that Theia will collide with Venus as with Earth after this first earth collision. Have we just been lucky? Also, while collisions like this weren’t really common at the end of Earth’s formation, it seems odd that a previous or a posterior collision did not hit and run on us, though. be collapsed to collide with Venus and help this form a moon. Still lucky? They postulate that it is actually easier for a disc of debris around Venus to fall onto the planet, leaving behind only enough material to form a smaller moon. In the meantime, the still falling debris could have enough speed to erode a smaller moon.

We don’t know if it’s likely, but what scenario it would be. A rain of planetary collision debris so thick and fast iit would eat away at an entire moon. Yegads.

This idea is quite interesting, and I’ll keep my eyes peeled for articles from other astronomers supporting or disproving it. This is how science works. But what I really like here is the inventiveness, the idea that we have to keep studying these processes because they don’t explain everything we see in the solar system right now. And even if we explain it all doesn’t mean it’s law.

When it comes to science, the investigation never stops. Even if you’re right, it might be for the wrong reasons, and it’s always worth a little more detective work.