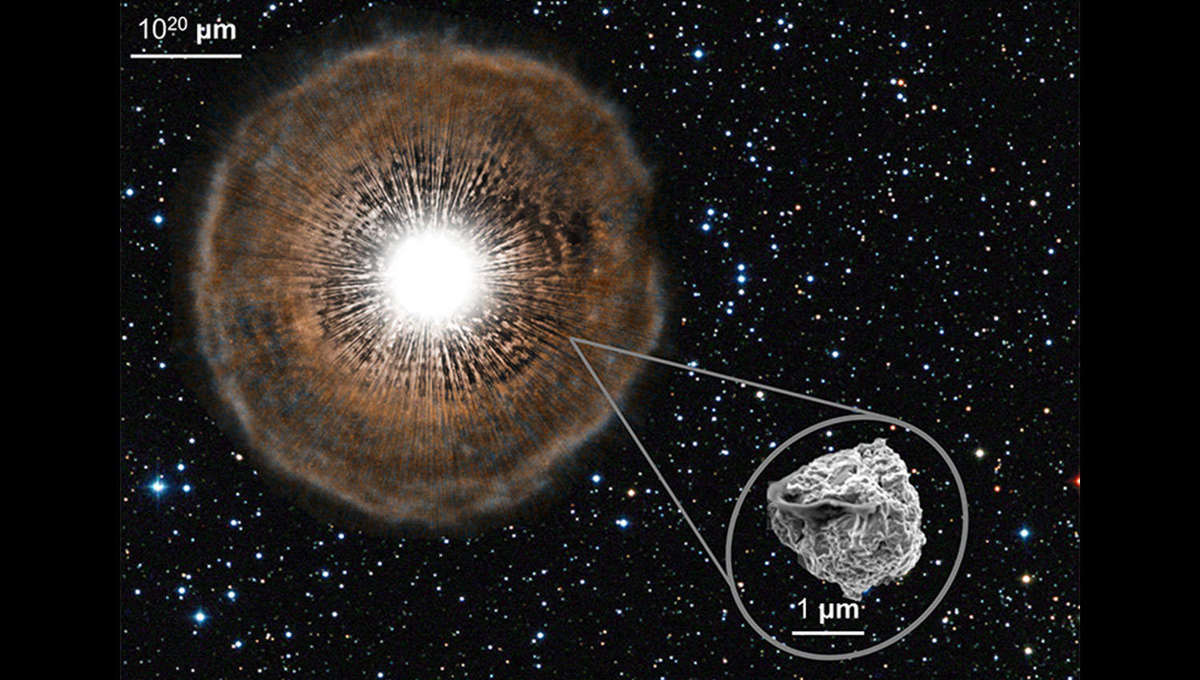 Bad astronomy | Presolar grains in meteorites formed in other stars

You are made of star stuff.

Carl Sagan said this in his series Cosmos, and it is literally true. We know the early universe contained only hydrogen and helium (and a hint of lithium), and all of the heavier elements – carbon, oxygen, phosphorus, etc. – were made from stars. These were then ejected into space, eventually making their way towards you (some steps may have been skipped here for the sake of brevity).

We have known for some time that these elements were created in many different stars. The Sun formed from a cloud of gas and dust, and it was certainly contaminated for billions of years by winds from dying stars and debris from those that exploded. But what kinds?

Newly published article helps narrow down the choices. Using a new technique to measure elemental abundances (how much of each type of element exists in a sample), a team of cosmochemists were able to track which types of stars were among the materials that make up the solar system.

How? ‘Or’ What? Looking at the meteorites. Surprise!

Okay, let’s go back a bit. 4.6 billion years ago, a cloud of gas and dust collapsed. It may have collided with another cloud, or a nearby star may have exploded it and struck it with debris, or a dying star with a super-solar wind may have struck it and triggered the process.

The cloud has shrunk, and finally formed a flat disc. The Sun formed in the center and the planets in the disk. But not at first: This process of creating planets began when tiny grains of dust stuck together (or, further into the disk where it was much colder, ice and dust clumped together). Then, these grains stuck together, eventually becoming pebbles, then rocks, then planetesimals (piece more than 1 km in size) and finally, finally, planets.

But some of these pieces never formed real planets, instead, they just get bigger until they form asteroids. These come in different flavors: some are rocky, others metallic, others much richer in carbon. For billions of years, these asteroids collide and collisions send shrapnel flying. Some of these pieces are then in orbits that intersect Earth’s, and if they and we occupy the same space at the same time, this fragment of asteroid debris (called a meteoroid) will hit us. Much will burn in our atmosphere, but often a small piece will survive the fall to the ground, becoming a meteorite.

Now that’s cool enough that we can find and collect the remnants of the solar system formation. But it’s getting better.

This initial cloud of gas and dust from which the solar system formed has probably existed for a long, long time. During this period, it orbited the galaxy and other stars passed by. Some of them were born much like the Sun, but were more massive. When they reached the end of their life, they grew and cooled, becoming red giants. There are many steps in this process, but they can shrink and then become huge again, becoming asymptotic red giants; huge, swollen stars. The carbon created in their nuclei via the thermonuclear fusion of helium is dredged to their surface where it is then blown into space, creating what we call interstellar dust.*.

Some of these stars have so much carbon in their atmosphere that we call them carbon stars. I’ve seen a few of them through telescopes, and they’re dark red rubies shining in the sky. Very charming.

Either way, the winds from these stars blew different elements into space, like carbon, nitrogen, and aluminum. This substance formed grains of matter, and because they formed before us, we call them presolar seeds. They then dragged around the galaxy until some of them collided with our own cloud. As our locally sourced material aggregated into pebbles and the like, these extraterrestrial presolar grains have been assimilated and become part of it.

And they hitchhiked to Earth in flaming meteors, just waiting for people to study them.

And of course astronomers have. The problem is, these grains are tiny, some one or two microns wide (a human hair is about 100 microns wide), which makes them difficult to study. Worse, the techniques used to study them can mix presolar and solar materials together, contaminating samples, making it impossible to know what formed here and what formed. the low.

The new study has found a way around this. They used a beam of oxygen ions (oxygen atoms with a torn electron) to hit the meteorite grains and pulverize the outer parts, sandblasting them in a way. This removes the material made from the solar cloud and leaves the presolar grains with much less contamination.

They could then examine the ratios of isotopes in the grain, such as carbon 12 (carbon atoms with 6 neutrons in the nucleus) to carbon 13 (atoms with 7 nuclear neutrons). This is essential, because different types of carbon stars create these elements in different proportions. Earlier techniques struggled to obtain these ratios, but the new method produced better numbers. Examination of different presolar grains of the famous Murchison meteorite – a carbon-rich meteorite that fell in Australia in 1969 – they were able to observe grains that clearly came from three different types of carbon stars, and in what abundance. They could also see that some grains were from a star or stars that had exploded, i.e. supernovae.

Importantly, they also looked at a radioactive form of aluminum created in these stars. This material generates heat, and it is believed that at the start of their genesis, planets and smaller objects (like Pluto) were heated by collecting this form of aluminum. They found that the ratios in the grains were much lower than previous measurements, which means stellar astrophysicists need to rethink how this substance is made and transported into space.

This type of research has been done before but never with this precision and without having to worry too much about contamination spoiling the results. This should open the door to a much better understanding of how these stars make these elements and how they got here.

I collect meteorites, and I have meteorites similar to Murchison. When I hold them in my hand, I marvel at holding a piece of the solar system from its very early days … but I also hold pieces of several different stars.

If you don’t have a meteorite handy, that’s okay. Look at yourself in a mirror or rub your fingers together. Do you see that, do you feel that? It’s made of stuff from many different stars, separated by eons in time and thousands of light years of space, and they all came together to form you.

Never, ever forget that. Always remember that what Sagan said is literally true:

â€œâ€¦ The cosmos is also within us. We’re made of celebrity stuff. We are a way for the cosmos to know itself.

*Do you remember when Betelgeuse faded so much in 2019 and 2020? It was creating huge clouds of dust and blowing them out, blocking its light. It’s very similar to what I’m talking about here.

Astronomers get a 3D glimpse of nearby stellar nurseries