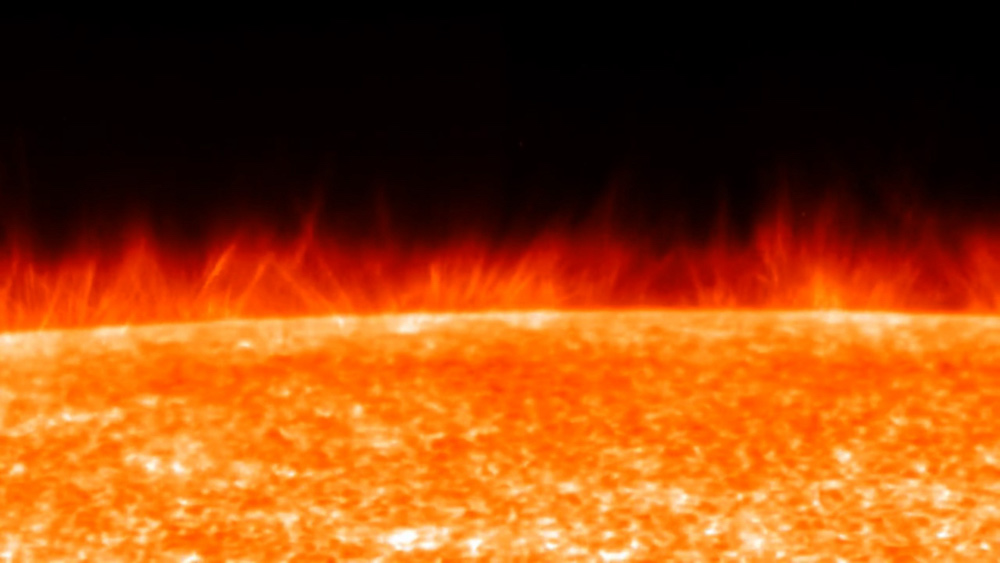 The Sun is literally the closest star to us in the entire Universe, but there are many things that are still quite mysterious.

For example, nearly 150 years ago, astronomer Angelo Secchi first observed narrow, towering fingers of matter extending vertically away from the Sun. Called spiculesthese can reach a height of 12,000 kilometers – nearly the diameter of the Earth – but tend to be only 1/10and so wide. They grow in minutes, rising at tens of thousands of miles per hour, and then collapse.

There are millions spicules on the Sun at any given time, and they look like grass or shag carpet. The time-lapse video of them is haunting and disturbing:

And while they’re known to be associated with strong magnetic fields – typical of phenomena on the Sun – even after all this time, it’s unclear what’s causing them. Paper after paper has been published over the years, with varying degrees of success in explaining these strange features.

A few years ago, a study showed that they could be due to the way the magnetic field interacts with electrically neutral and charged particles on the surface of the Sun. However, another team of solar astronomers wondered if there might be a more fundamental piece of physics going on with them. They noticed how fluids can dance when vibrated by sound waves from a speaker – here’s a good video of that – and thought there might be a connection. When the surface of a fluid vibrates you can get sharp patterns as the waves are pumped by them, but as the frequency increases there is a critical frequency as the surface begins to create gushing jets of water . This type of motion is called Faraday excitation or Faraday waves. Usually in water or other liquids the top of the jet breaks up into a droplet which then falls back to the surface.

This type of event is common in nature; in fact, alligators use a low-frequency mating call that can make it happen in the water around them, shown in this video about 20 seconds long.

The Sun’s surface is a plasma, mostly hydrogen that is so hot that the atoms have lost an electron, and is dense enough to act as a fluid. In addition, there are many sources of vibrations on the solar surface. Deep inside the Sun there is a layer where extremely hot matter rises buoyantly, and when it reaches the surface it cools and falls back down. It’s called convection, and there are many towering convective conveyor belts carrying material up and down in the Sun. This causes a continuous rumble on the surface at a frequency that could excite Faraday waves.

The new research [link to paper] first shows that the physics of Faraday waves in the Sun and in a fluid dancing on a loudspeaker are similar. They then experimented with various fluids in the lab to see if they could mimic the spicules. They found that a diluted mixture of a polymer (specifically polyethylene oxide) when placed on a loudspeaker can create jets very similar to spicules, and when diluted to the correct quantity, the creation of droplets is also suppressed. Spikes don’t make droplets, so since the calculations are similar to describe the two effects, there could be physical similarities.

They then turned to software that simulates the behavior of solar plasma. Using the known physics of its behavior, the code can be modified to see if certain behaviors can be reproduced. Without real detailed inputs – simply using the vibrations of the solar surface created from sound waves of certain harmonic frequencies – their code reproduced spicule-like structures. It’s encouraging ! They also discovered that the entrainment frequency need not be harmonic (i.e. sound waves of uniformly divisible frequencies, such as for example 440 and 220 and 110 Hertz), but can be quasi -periodic; mainly periodic but with a bit of chance. That’s good too, because the Sun’s surface is a cacophony of different frequencies that don’t always create harmonic chords.

When they added a simple vertical magnetic field to their code, they found they got even more spicule-like behavior, with just about the right heights and widths. The growth rate was also similar. The magnetic field introduces anisotropy, a non-symmetrical nature to the surface that helps compress the plasma into tight turns. This is similar for the need for the polymeric fluid to be diluted; it is also an anisotropy that helps the jets to form.

The general conclusion is that they have found a more fundamental reason why spicules could be produced on the Sun without the need for many special circumstances. This doesn’t necessarily mean that previous research was wrong, but it can be nice to sometimes look up more fundamental physics to see what it contributes, and then add layers to it.

And, like previous attempts to explain spicules, it’s hard to know if that’s the right answer. Just because experiments and code do something like spicules doesn’t mean that’s what’s happening.

As I like to point out, that’s the nature of science. We usually end up with a lot of ideas to explain a phenomenon, and it can take a while to weed out which ones are actually involved and which ones aren’t. The Sun is a nightmare of complexity, and much of its behavior is incredibly difficult to understand. But we now have observatories like Hinode and Solar Dynamics Observatory and the Inouye Solar Telescope that can see the Sun in high resolution and at wavelengths of light that our eyes can’t see, and all of these observations are helping theorists to understand what is what.

Over time, we will understand the Sun better and better. This is also how science works.