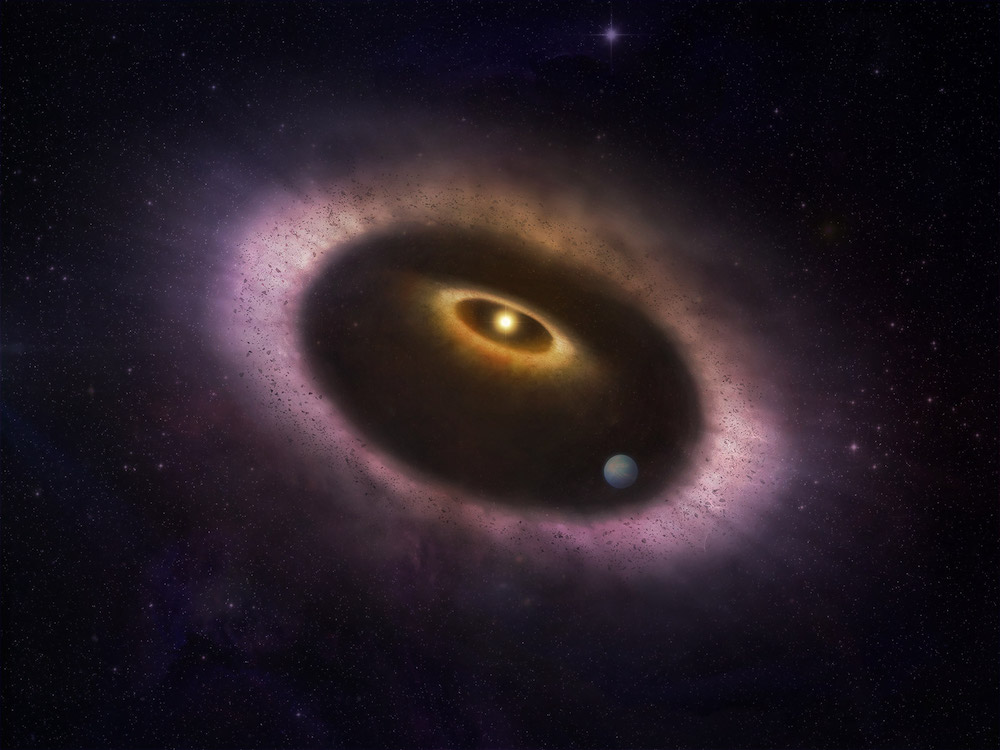 One of the most amazing things in astronomy is the way it acts as a time travel machine.

For example, sometimes we see things so far away that it takes light billions of years to reach us, so we see that object as it was when it was young.

But in another way, we can time travel looking at a star that is very similar but much younger than the Sun currently is. It is not perfect, but it gives us an idea of ​​what our nearest star was in his youth.

HD 53143 is one such star. It’s a little cooler and darker than the Sun – a G9V for people who love their astrojargon – and probably around a billion years old. The Sun is 4.6 billion years old, so HD 53143 is a bit younger. And only 60 light years from us, it is close enough to be studied in detail.

When stars are born, they are surrounded by a disk of material that forms the star itself as well as the planets, asteroids, comets, and various small bodies that orbit it. Over time, much of the material from this disc is used to make all these bodies or is carried away by the star after it is ignited. But there can still be a lot of trash in orbit; Beyond Neptune in our solar system, there are trillions of icy bodies with encrusted dust and rock, generically called trans-Neptunian objects. There is a disc just After the Neptune orbit called the Kuiper belt, a semi-flat ring with the sun in its center. As these objects collide, they generate dust which also orbits around the sun.

HD 53143 has something like that too, but it’s very different. called a debris disk, it was discovered in images from the Hubble Space Telescope in 2006. The images showed it, but it was faint and difficult to analyze. He looked quite circular, as if we saw it from the front, with some brighter regions. Follow-up images from Hubble with a different camera showed it a little better, but lacked the detail needed to really nail down its structure.

However, new observations using the Atacama Large Millimeter/submillimeter Array have, for the first time, resolved the disk to long wavelengths, where this dust glows with its own heat. And what it shows is not at all what we expected [link to paper].

For one thing, we don’t see it head-on at all. It looks like an ellipse, not a circle. But also, look at the star: It is definitely off-center! This makes sense if the disc is truly elliptical; the dust orbits HD 53143 in an ellipse and the star, if you remember your high school math, is not at the center but at a focus.

Note the light spot in the lower right. It is probably the apoapsis of the dust – the part of its orbit where it is the most distant from the star. Orbital motion is slowest there and dust accumulates around this location. More dust = brighter light.

An elliptical ring like this has been seen before. The ring of dust around bright star Fomalhaut is also an ellipse, but the one around HD 53143 is much more elliptical – astronomers say it has a superior eccentricity.

It’s particular. You would expect this material, like dust from our Kuiper Belt, to orbit the star in a circle with the star itself at the very center. So why is the ring elliptical?

The simplest explanation is that there is a planet or planets orbiting the star pulling on it with their gravity, pulling it into an ellipse. These planets are too small and faint to be seen with the observations we currently have, so we can’t say for sure that they are there. But that’s the way I would bet.

In addition, there is an internal disc not seen in the Alma images, but detected in the previous images of Hubble. He is too close to the star to say a lot, but he does not seem to be aligned with the disc seen by Alma; it is tilted and turned at a different angle from us. At the beginning of a solar system, the planets can move closer or further from the star as they interact, and this migration could explain why the rings are misaligned. The severity of the planet or the planets could shoot the inner disc and mingle with the orbit of the dust.

It is possible that the outer ring is directing matter towards the star and feeding the inner disk, perhaps again focused by a planet or multiple planets, which would also be a reason why the disks are tilted. No matter how they formed, they’re pretty weird.

It’s not hard to look at HD 53143 and wonder if our own solar system looked like this over 3 billion years ago. Was there a young Kuiper belt that was also seriously shifted, possibly affected by the baby versions of the outer giant planets? And in those eons, has it calmed down a bit?

I can understand that. I was a teenager once, and definitely eccentric, if not literally dusty. But it is interesting to note that there are parallels between our own lives and those of stars. And if those parallels are true star to star, then HD 53143 can tell us what things were like in the brash youth of the Solar System and the Sun.