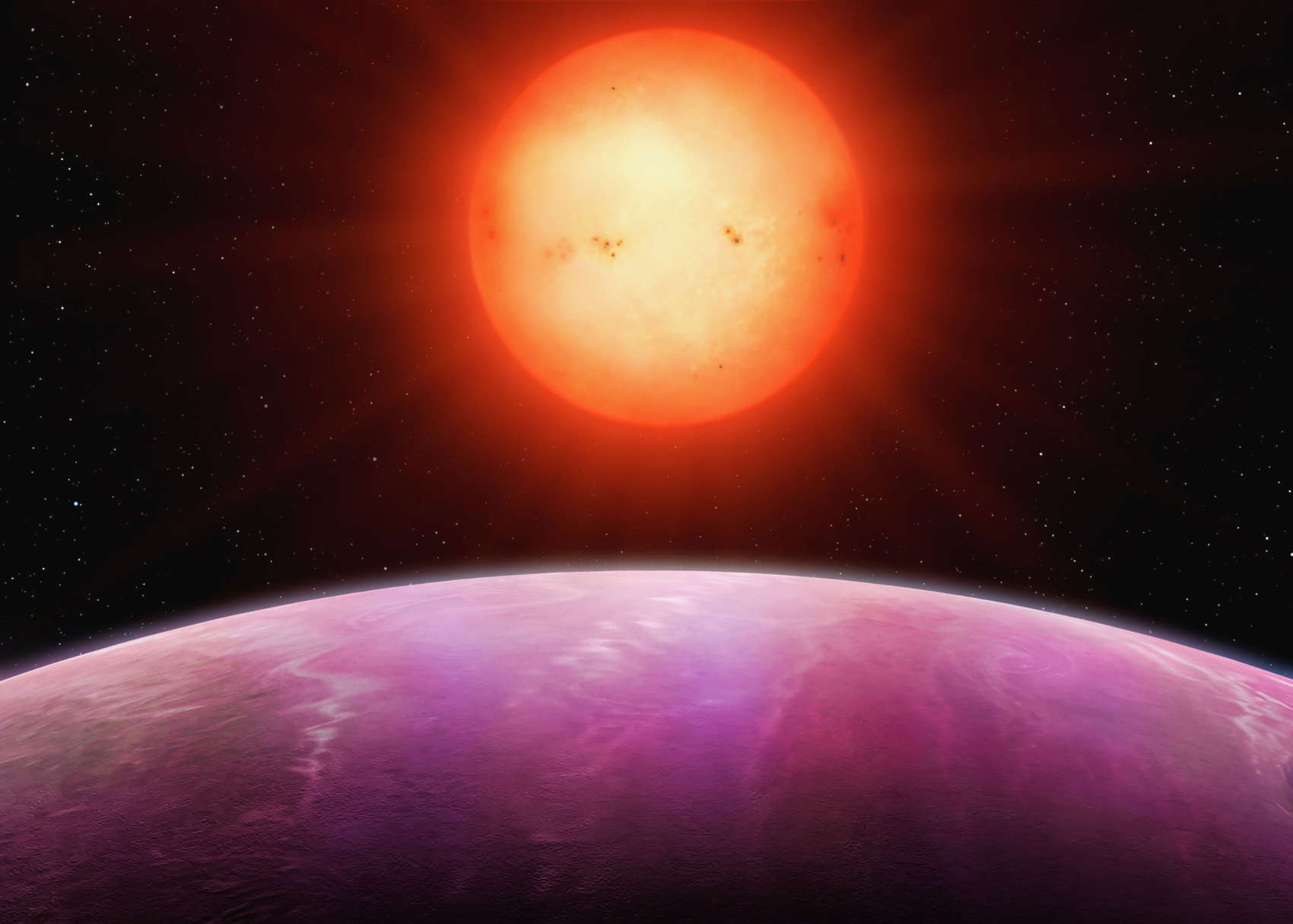 The astronomical community was shocked in 1995 when the first planet orbiting a Sun-like star was discovered. Not just because of the discovery itself, but because the planet was what we now call a Hot Jupiter: Gas giant orbiting very close to its host star.

In our solar system, the gas giants stand at a respectable distance from the Sun; Jupiter is five times farther from the Sun than Earth and takes twelve years to orbit. But as we have now seen, many large planets orbit much, much closer to their stars and take only a few days to orbit them.

That’s cool in itself, but then the question arose: what happens to these planets when their star starts to die? Stars swell into red giants and become enormous, many larger than the orbits of these hot Jupiters. What is the fate of these planets?

This is pretty much what you would expect: They are doomed. The star will consume them.

Ouch. So, do we see planets in danger?

The very fact that you are reading this article makes the answer obvious. Yes, planets in this exact location have been discovered, but mysteries abound. Tidal interactions with their stars should cause them to fall so close that they are engulfed fairly quickly on a cosmic timescale. Yet we find them, so how do they get there? Did they form further and migrate inwards? Can we see them getting closer over time? What happens to their atmospheres when they get really close to their stars?

Three new exoplanet discoveries could help answer some of these questions. The clock is definitely ticking for these planets, and while the outlook isn’t so good for them, it’s excellent for astronomers (link to article).

The planets were found in data taken by TESS, the Transiting Exoplanet Survey Satellite, which scans the sky for planets. If we view the orbit from the edge, the planet creates a mini-eclipse of its star once per orbit. From there it is possible to get the orbital period, planet size, etc. Although not common, a few planets orbiting very close to “evolved” stars – those that are already dying and swelling into red giants – have been discovered.

The three new exoplanets are called TOI-2337b, TOI-4329b and TOI-2669b (TOI = TESS Object of Interest). The three host stars of these planets are much larger than the Sun although they are only a little more massive, which is a clear indication that they are coming to an end. Technically they would be classified as sub-giants, beginning to swell up to a few times the size of the Sun, but still below tens or even hundreds of times that they will reach when they become full-fledged red giants.

Its good! This means we are seeing these planets at the right time, just when things are really starting to pick up. And some interesting effects are observed.

The masses of the planets were found by taking spectra and seeing how much their gravity pulls on their stars. Combined with size, this gives density. It’s essential, because it tells you what the planet is made of, or if it’s weird in some way.

Two of the planets are strange in a way: they are puffy. TOI-4329b and TOI-2669b are much larger than one would expect given their masses – 4329b is 1.5 times the size of Jupiter despite being less than half its mass, and 2669b is 1.75 times the diameter of Jupiter but only 0.6 times its mass.

Interestingly, 2337b is bizarre by not be weird: it doesn’t seem to be swollen. It’s a bit smaller than Jupiter, but 1.6 times more massive. This makes it denser, which may explain why it is not puffy despite having 1,500 times more energy than Earth. It has a higher surface gravity, so it’s harder to inflate. Given that its orbital period is just under three Earth days – the shortest known for any planet orbiting a dying star – meaning it is very close to the star — it’s still surprising.

Obviously, inflation has more to do with the planet than the star. This is already a good data point to understand these planets.

What about orbital decay? The complex gravitational interactions between a star and a nearby planet will tend to cause it to fall even closer (this is the same effect, albeit in the opposite direction, that causes the Moon to move away from Earth by about 4 centimeters per year). 2337b is expected to have the highest decay rate of the three, but none were detected in the data. The other two don’t have enough observations to say reliably. It seems that for this little information, more observations will be necessary. Too bad, but it’s science.

The good news is that the two puffy planets are good candidates for future observations to examine their atmospheres. During a transit, the planet is between us and the star. Light from the star can pass through the relatively transparent upper atmospheres of these planets before reaching us. Different molecules – like carbon dioxide, water, etc. – absorb light at different colors, so it is possible to determine some of the constituents of planetary atmospheres.

This has already been done for planets around Sun-like stars. Do these newly discovered planets have noticeably different atmospheres, and if so, could this be due to their evolving stellar hosts? Future observations, perhaps with the James Webb Space Telescope, could reveal such secrets.

If all this seems academic to you, I can understand it, but it touches me closely. In 6 or 7 billion years, the Sun will also begin to die, swelling first into a subgiant and then into a true red giant. It will consume Mercury and Venus, and recent work indicates the Earth is doomed as well.

These new planets may be very different from our home world, but we have this in common with them: they will all be cooked and eaten by their star. Knowing their fate may very well reveal something about ours. If only for our own morbid interest, it is worth considering.