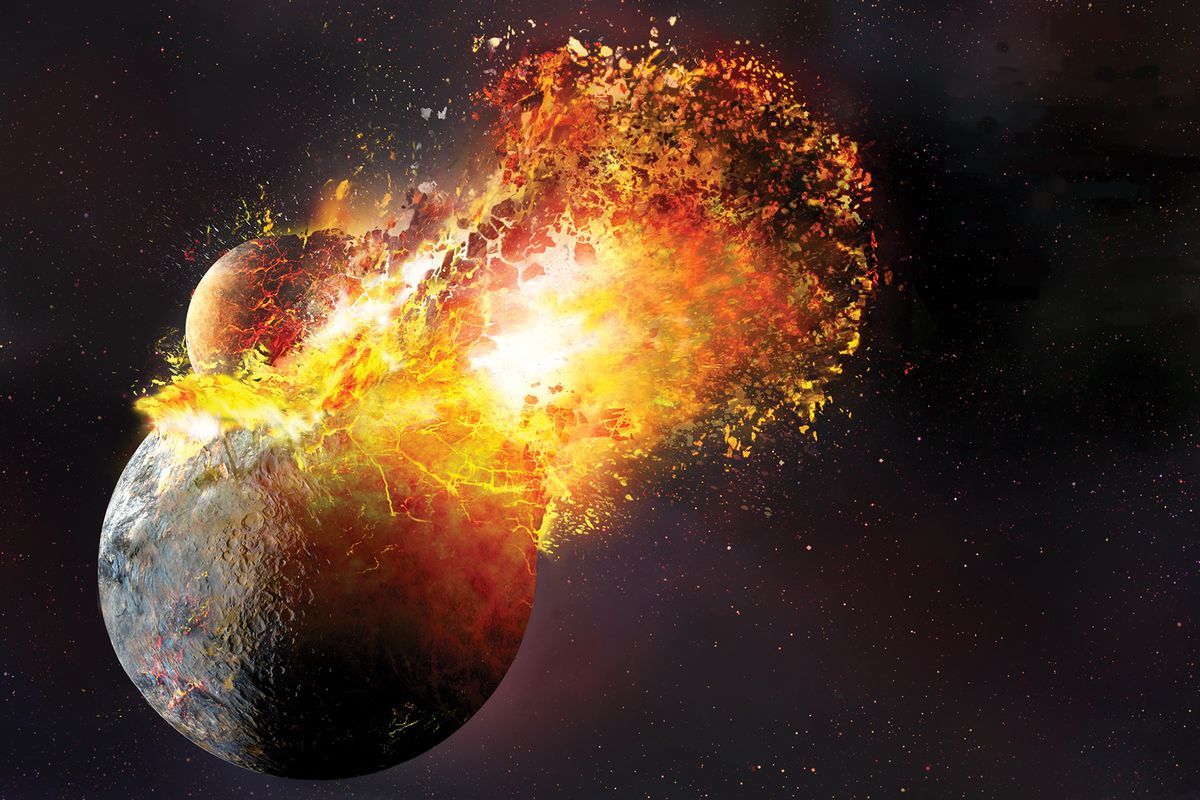 In a planet-forming disc of gas and dust around a nearby young star, two huge objects recently collided at high speed. The colossal impact was positively apocalyptic in size, vaporizing enough material to make a small planet – at least. Even better, the huge dust cloud created during the event passed between us and the star, eclipsing it twice, allowing astronomers to learn more about this disaster.

The star is called HD 166191 and is about 325 light-years from Earth in the direction of the constellation Sagittarius. It’s bigger, more massive and hotter than the Sun, and it’s young, probably only 10 million years old – our Sun is 450 times older than that, so the star is just a baby .

Young stars are usually surrounded by a disk of material called the protoplanetary disk, from which planets form. These discs are hot and although most are too small to see directly, their heat emits infrared light which can betray their presence. This infrared excess is observed with HD 166191, indicating that such a disc orbits it.

A team of astronomers observed the star with the Spitzer Space Telescope specifically to look at the disk and see the changes as planets form. Spitzer was an infrared observatory that operated for 17 years before being decommissioned in January 2020. For five years, between 2015 and 2019, the telescope examined HD 166191, monitoring it roughly every three days for a month twice. per year, returning more than 100 separate observations [link to paper].

The star’s infrared light was roughly stable until in 2018 its brightness suddenly increased. Over the course of about a year, its brightness doubled, a huge increase. It peaked in 2019 and was still close to that peak during Spitzer’s last round of observations in the summer of 2019.

A key point is that the star itself didn’t get any brighter in visible light – the kind our eyes see – which pretty clearly shows that something other than the star was generating this infrared light. Given that the star is young and there are likely planets forming in the disk, the obvious conclusion is that two rocky protoplanetary objects collided at high speed. The immense impact would have created intense heat, vaporizing a lot of material which would then cool and condense into hot dust, and this cloud was what emitted the infrared light.

Entire planets collide. I still have to remind myself that things like this are real.

Interestingly, two large dips were observed in the visible light brightness of the star, separated by about 142 days around the same time that the IR brightness increased. Astronomers attribute this to the dust cloud itself passing between the star and us, blocking its light. If that’s the dust cloud’s orbital period, that means the objects collided about 90 million kilometers from the star – slightly less than Venus’ distance from our Sun – and given the time qu t took the star to darken and brighten again, the cloud is huge, at least 3 million km in diameter.

And, in fact, it’s probably a lot bigger. If the cloud’s orbit is tilted towards our line of sight, that means only the edge of it has intersected the star, so the actual size could be much larger than assumed. In fact, the type of material seen is usually only a fraction of the total material exploded in such an event, so there could be a lot more in that cloud than is seen.

Given the minimal size and brightness of the infrared emission, astronomers estimate that the dust generated during the impact was sufficient to create a single object 400 to 600 km in diameter. It is enormous; the size of Vesta, the second largest object in our asteroid belt, and again that’s a minimum. The objects that collided could have been the size of a planet.

Incredible. Hundreds of light-years apart, two planetary objects collided at speeds of up to tens of thousands of miles per hour, and the resulting catastrophic explosion of material expelled 100 quadrillion tons of dust. At least.

We’ve seen evidence of such things before, but this is the first time a debris cloud has been seen transiting the star, allowing the size and mass of the cloud to be calculated. It’s phenomenal. Unfortunately, without Spitzer, it’s unclear whether such things can be tracked; James Webb is likely to be hugely oversubscribed as is, and observing the same object over and over often enough to catch such an event seems like something the JWST Telescope Allocation Committee would likely deny. I would also like to see more small infrared telescopes in space, so we can do precise things like JWST and still do more investigative stuff like watching planetary collisions like the ones I saw in the movies when I was a child.

Because they are really coming. And we can learn a lot about how solar systems like ours and others form by observing them.