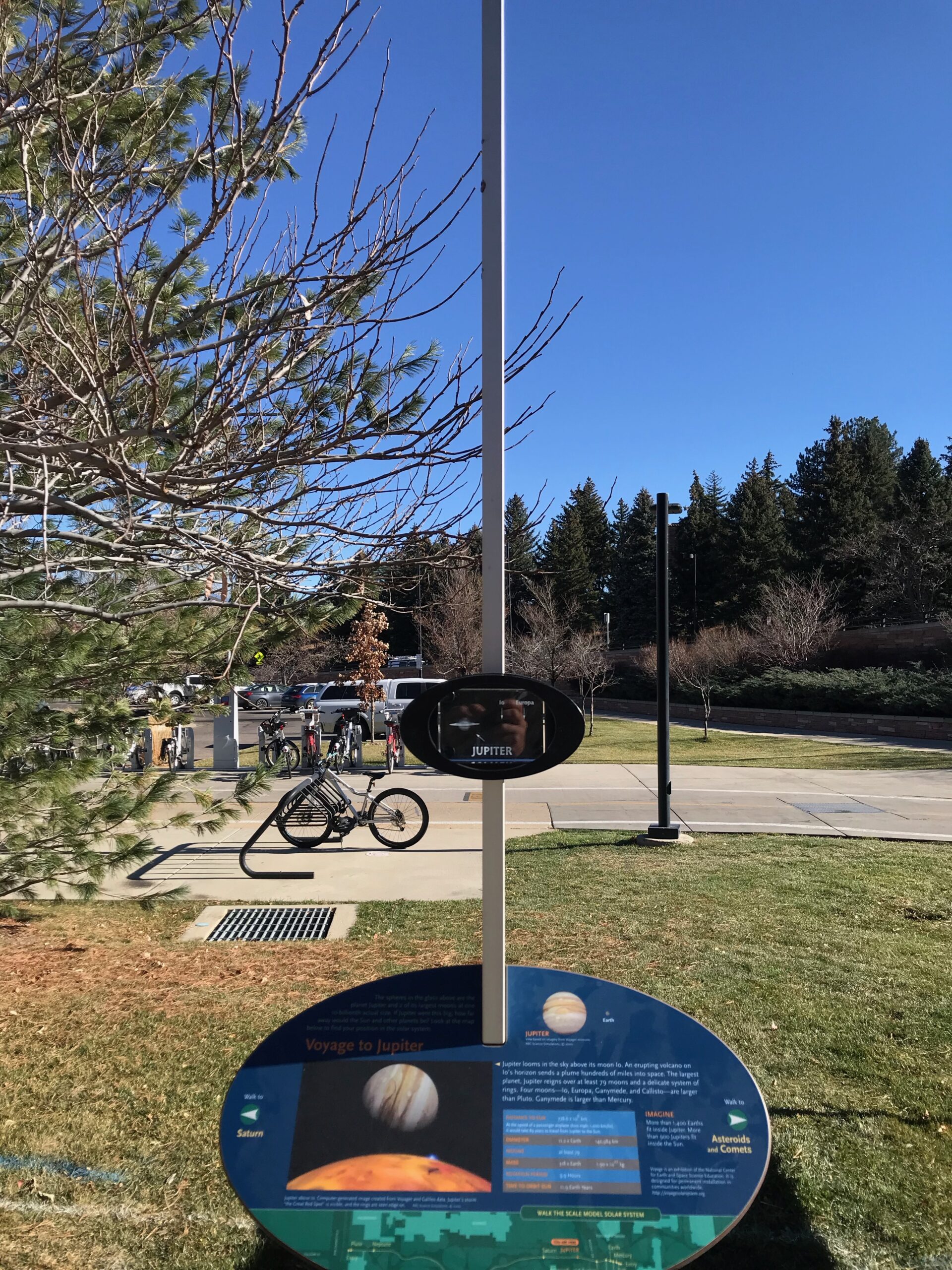 Have you ever embarked on a project that seemed insurmountable at first, but eventually found a way? Do you love astronomy awareness, planets and all things space? Then today’s article may be for you!

In 2018, I was a second-year graduate student at CU Boulder, teaching in an undergraduate astronomy lab. For the lab, the students were tasked with walking through the original Colorado Scale Model Solar System (CSMSS; Figure 1). Their objective ? Understand the relative distances between celestial bodies in our solar system. To do this, they counted the steps between the model planets, multiplied the distances traveled by 10 billion and saw for themselves that these values ​​actually corresponded to the true distances of the planets from the Sun.

Figure 1: The original Solar System from the Colorado scale model at CU Boulder. Installed in 1987.

For context, the model sun (about the size of a grapefruit) resides outside the university’s Fiske Planetarium and marks the beginning of the shrinking solar system. About 20 paces away is the model of Earth – about the size of the tip of a ballpoint pen. Also, about 100 paces from the solar model (beyond the model’s asteroid belt support) is the first gas giant, Jupiter – the size of a small grape. The scale model continues for about a third of a mile before reaching the “dwarf planet” Pluto.

What a simple task, counting steps between tiny imaginary planetary orbs. However, with such a simple exercise comes the profound opportunity to manifest insight into the vast distances of the cosmos.

It was after the lab that day that I slowly meandered back to my office. I reduced my pace and began to slowly inspect each model planet myself. I meticulously analyzed each planetary pole. I couldn’t help but observe the rough and weathered state of the plates. Cracks creeping along the edges. The bases were dug out following collisions with vehicles. Text faded on most plates. Pluto was ALWAYS a planet…

The idea arose that day. The CU Boulder campus is home to a state-of-the-art planetarium (Fiske) and impressive observatory (Sommers Bausch); astronomical investments of several million dollars. Surely there was a budget somewhere to improve this model, right?

So I started digging. First with the main instructor of the lab I was teaching. Then with the director of the Planetarium at the time. One contact led to another, then another, and yet another. The desire to discover a solution extended like flames. Yet it turned out that there was no budget available and very few people I contacted had concrete answers.

I knew early on that this path would be winding and that I would need to expand my reach further. I eventually contacted Dr. John Keller and Dr. Seth Hornstein, the current directors of the Fiske Planetarium and Bausch de Sommer Observatory at CU Boulder. Then my proposal to update the model found its way to the pioneer of the existing model, Dr. Jeff Bennett, who coincidentally was also a graduate student at CU Boulder at the time he led the effort to build the Original CMSMS.

Dr. Bennett provided the traction and interest we desperately needed (as well as seed funding). Additionally, his insight helped us realize that we didn’t just need renovations, we needed a complete model upgrade (due to the custom build of the original model and the cost of parts spare). With its spark, a tangible plan began to form and the committee responsible for upgrading the existing model united. Dr. Keller, Dr. Hornstein, Dr. Bennett and I started running. [The key takeaway here is that if I stopped searching for solutions after a few dead ends, I would not have stumbled upon Dr. Bennett.]

First, we sought advice and support from the university to bring a new model to campus. We needed to make sure that we could logistically achieve this and that we had the approval of CU Boulder management. Then we had to consider some things. Do we have a construction team? An installation schedule? What was the fundraising goal and did we have a list of target donors? Were we sure we had the right model to replace the original? The meetings were long and continuous. However, these critical questions guided the next steps.

To begin with, we knew we didn’t want to touch the fundamentals of the original model. We have therefore chosen to maintain the scale at 1:10 billion. Then we made the biggest decision of the project and decided to become the first institution in the world to install the Voyage Mark II (VMII; Figure 2) National Center for Earth and Space Science Education model. This is due to the success of Voyage Mark I, especially with its popularity on the National Mall in Washington D.C., the potential notoriety of being the first institution with a VMII, and the direct connection that Dr. Bennett had with the vendor.

Another major talking point was the fact that the original CSMSS was originally built in 1987 to serve as a memorial to CU Boulder alumnus Ellison S. Onizuka, a member of the deceased astronaut’s crew. aboard Space Shuttle Challenger (January 28, 1986). We wanted to preserve that. So we decided to do that, then we went a step further and chose to expand the memorial to honor the deceased crew of Space Shuttle Columbia (February 1, 2003), and specifically the alumnus of CU Boulder at aboard Columbia, Dr. Kalpana Chawla.

Then we thought about additional improvements to the model that would make it even more compelling, beyond the physical display itself. To that end, Dr. Keller reached out to Dr. Teri Reub (Chair of the College of Media, Communication, and Information Department at CU Boulder) about creating an engaging mobile app to be associated with the new exhibit.

With the mobile app, we calculated that we would need just over $110,000 to achieve this! Nonetheless, we weren’t discouraged and redirected all of our efforts to fundraising once we settled on the logistics, design and execution plan. We wrote department proposals, solicited input from the public, and ultimately reached out to larger STEM institutions in Boulder. Although the majority of our requests were turned down, we still gained ground by slowly building a network of investors. With every setback we faced, we kept turning the wheel and for 3 long years we ended up receiving contributions from the University Provost Marshal’s Office, Chancellor’s Office, Atmospheric Physics Laboratory and Space, from the Department of Astrophysics and Planetary Science, Department of Aeronautical Engineering, Dr. Jeff Bennett himself and individual donors. Then… ultimately, the day has come when we have reached our fundraising goal!

Our efforts paid off and we were able to acquire the new model in 2021 (Figure 3). In the process, 11 additional communities have committed to their own VMII, and more than 40 have expressed interest. In addition, the mobile application that associates with the model, “Wanderers CU“, is now in the Apple App Store. Wanderers CU provides an in-depth sound experience that responds to a visitor’s movement through the model as detected by GPS. In the app, the mass relative and the orbital period of the planets in the model are expressed audibly, with each celestial body having a unique sound profile. As the mobile listener travels through the planets, the user hears a dynamic soundscape where the volume and direction of sounds change depending on the position and perspective of the participant.

Figure 3: Ribbon cutting event with Chancellor Phil DiStefano of CU Boulder and myself.

Beyond the static pages of textbooks, members of the public and students from elementary through graduate school will now have the opportunity to navigate the new model at CU Boulder, crystallizing an intimate understanding of cosmic distances in our universe. I hope they can bring the wonders of astronomy to life.

If you’re thinking of taking on a big project yourself, my advice would be to stay persistent, make sure you build the right team, constantly look for solutions, and don’t give up, even when things look bleak!