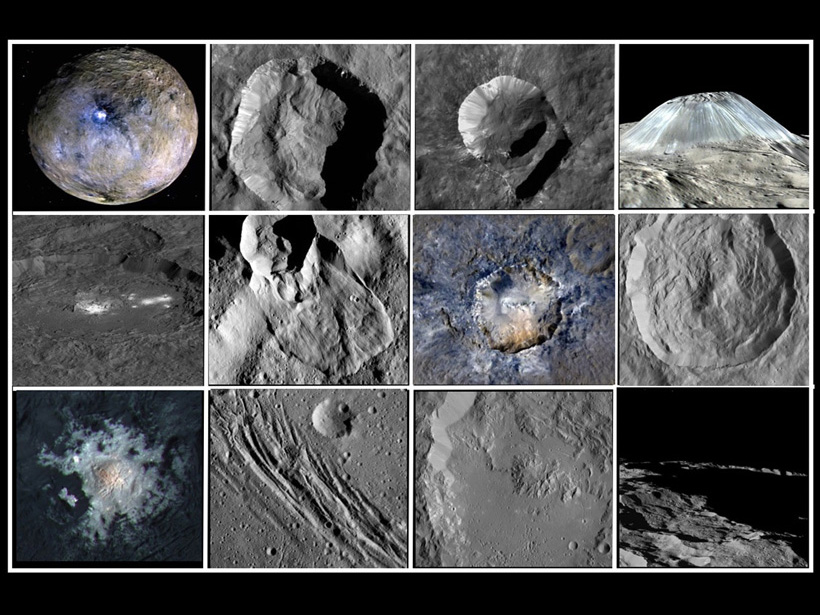 Ceres, the largest object in the asteroid belt, is made up of rock and ice. NASA’s Dawn spacecraft, which orbited Ceres between 2015 and 2018, has given scientists a lot of new information about its internal shape and structure, surface morphology and composition. A special collection in Journal of Geophysical Research: Planets focuses on the presence of ice in the subsoil of Ceres and its dynamic behavior. I asked Hanna Sizemore, guest editor of the special collection, a few questions about the mission and what was discovered.

Ceres was one of two asteroid belt bodies visited by NASA’s Dawn mission. Why was Ceres a focal point of this exploration mission?

Ceres and Vesta are generally considered to be two extreme cases of the possible evolution of large asteroids. Before the Dawn mission, it was believed that the two objects formed in the same neighborhood but at different times. Because Vesta formed early, it accumulated aluminum-26 (26Al), which produced abundant internal heat and rapid loss of water and other volatile substances. Ceres formed later, experienced less heating, and was able to hold a lot more of its water [McCord and Sotin, 2005].

An important objective of the Dawn mission was to relate the large asteroid interiors to the initial conditions of the protoplanetary disk, with Ceres representing an extreme scenario. There has been a long debate about how much of Earth’s water comes from the Main Belt, and whether it comes in the form of hydrated minerals or ice. The quantity of water in the main belt is only beginning to be inventoried.

Having a spaceship orbiting an ice-rich main belt item is extremely valuable.

There are big challenges in relating the surface composition information derived from telescope data to information about the interior of asteroids. [Rivkin et al., 2019]. These challenges make having a spaceship orbiting an ice-rich mainbelt object extremely valuable. As both the largest and most ice-rich object in the Main Belt, Ceres was a prime target for a mission.

The special collection focuses on water ice. How was ice an important factor in the evolution of the surface of Ceres?

Ceres owes its internal structure and spherical shape to ice.

At the most basic level, Ceres owes its internal structure and spherical shape to ice. It was able to partially differentiate (to form a rocky interior surrounded by an icy outer shell) because ice melts at lower temperatures than rock. He was able to retain enough mass to be spherical because he was cold enough to hold onto most of his H2O and other birds, unlike Vesta.

Ice also plays a key role in the modern landscaping of Ceres.

Of course, ice also plays a key role in the modern landscaping of Ceres. There are eight major classes of surface features that have been specifically related to subterranean ice and are observed over most of the surface of the dwarf planet. [Sizemore et al., 2019b].

Large domestic mountains, such as Ahuna Mons [Reusch et al., 2019], were among the first to be recognized in the first images returned by Dawn. Some of these mountains may be cryovolcanoes, or they may be formed by massive ice diapirs [Sori et al., 2018; Sizemore et al., 2019b].

Lobate landslides and ejecta were also recognized as ice-controlled features at the start of the Dawn mission. [Schmidt et al, 2017].

Some have similarities to rock glaciers on Earth and Mars, some have features in common with landslides on Iapetus.

The ice in the subsoil of Ceres contributes to the formation of fluidized, lobed and stratified ejecta around the craters.

In some cases, the cereal ejecta is similar to the layered ejecta formed in icy terrains on Mars and Ganymede. [Hughson et al., 2019].

Large-scale fractures inside the craters have been linked to rising ice and brine underground [Buczkowski et al., 2019]. The ice also causes the craters on Ceres to loosen, sometimes causing fractures around the edges of the craters which retain a distinct topography. [Otto et al., 2019] and, more rarely, flatten the topography of large craters [Bland et al., 2018].

Isn’t there also evidence that Ceres is active – including losing material in space? Why is this happening and why is it important?

There are two main pieces of evidence that Ceres outgas water in space, at least periodically.

The first line of evidence comes from the astronomical observations of Ceres from Earth. In the early 1990s, the International Ultraviolet Explorer (IUE) detected OH near Ceres limb [A’Hearn & Feldman, 1992]. In 2014, just before Dawn’s arrival in Ceres, water vapor was detected by the Herschel space observatory. [Küppers et al., 2014]. These two detections have sparked speculation on a cometary-style degassing and / or possible cryovolcanism on Ceres.

The second line of evidence for episodic outgassing comes from the geomorphology and mineralogy of Ceres, as Dawn observes. In Occator Crater, we see shiny carbonate deposits (faculae) that have likely formed by extrusion or even wetting brines on the surface over the past few millions of years. [Scully et al., 2019]. Problematically, Dawn did not observe any direct evidence of outgassing during her mission to Ceres or active brine extrusion. Any degassing from facula formation would have stopped millions of years ago, so it cannot explain the IUE and Herschel detections.

Explaining the Herschel data in particular has been difficult. The ice in the subsoil of Ceres slowly recedes to greater depths, producing a constant background rate of water vapor loss well below Herschel’s rate. [Landis et al., 2017]. Anytime ice is exposed to the surface, it will sublimate quickly. Thus, stochastic events, landslides and small impacts that expose the ice can cause short bursts of outgassing. A cluster of these events could have produced the water vapor detected by Herschel [Landis et al., 2018].

Additionally, seasonal changes in shading on the crater walls can lead to periodic buildup and sublimation of surface ice. [Formisano et al., 2019a; 2019b].

These passive near-surface processes most likely led to the outgassing events observed in 1992 and 2014, although we cannot be sure.

The near-surface processes are cometary-type degassing. Understanding these processes is important because they likely operate on many small, volatile bodies throughout the solar system and today dominate the production of water vapor in Ceres.

The regular degassing of stochastic and passive processes does not exclude more dramatic water explosions growing indoors in the recent geological past.

Work is underway to understand the formation of Occator light spots and the development of the large cryovolcano Ahuna Mons.

With the end of NASA’s Dawn mission, what are the next steps in exploring Ceres now that we know how important water ice has been to the body?

In the short term, there is work to be done to better understand Dawn’s data.

In the short term, there is work to be done on Earth to better understand Dawn’s data. In particular, laboratory experiments to determine the material properties of the unique mixtures of ice, salts and clays that occur on Ceres. Learning more about the properties of these mixtures will allow us to build better models of the structure and evolution of Ceres. [Sizemore et al. 2019a].

In the longer term, of course, we hope there will be new space missions.

In the longer term, of course, we hope there will be new space missions. These could include orbiters with instrumentation designed specifically to interrogate the ice and brine content of the interior of Ceres at depths that we could not effectively probe with the payload of Dawn’s instrument.

For example, an orbiter equipped with sounding radar could help us quantify the ice content of landslides and lobed ejecta, thus helping us to understand stratigraphy at the scale of 100 meters to 1 kilometer. An orbital magnetometer could constrain whether or not there is a deep brine layer. And of course, a future lander might be able to directly sample the structure and chemistry of ice – much like the Phoenix lander did on Mars.

Source of meteorites in the asteroid belt, not a single debris field