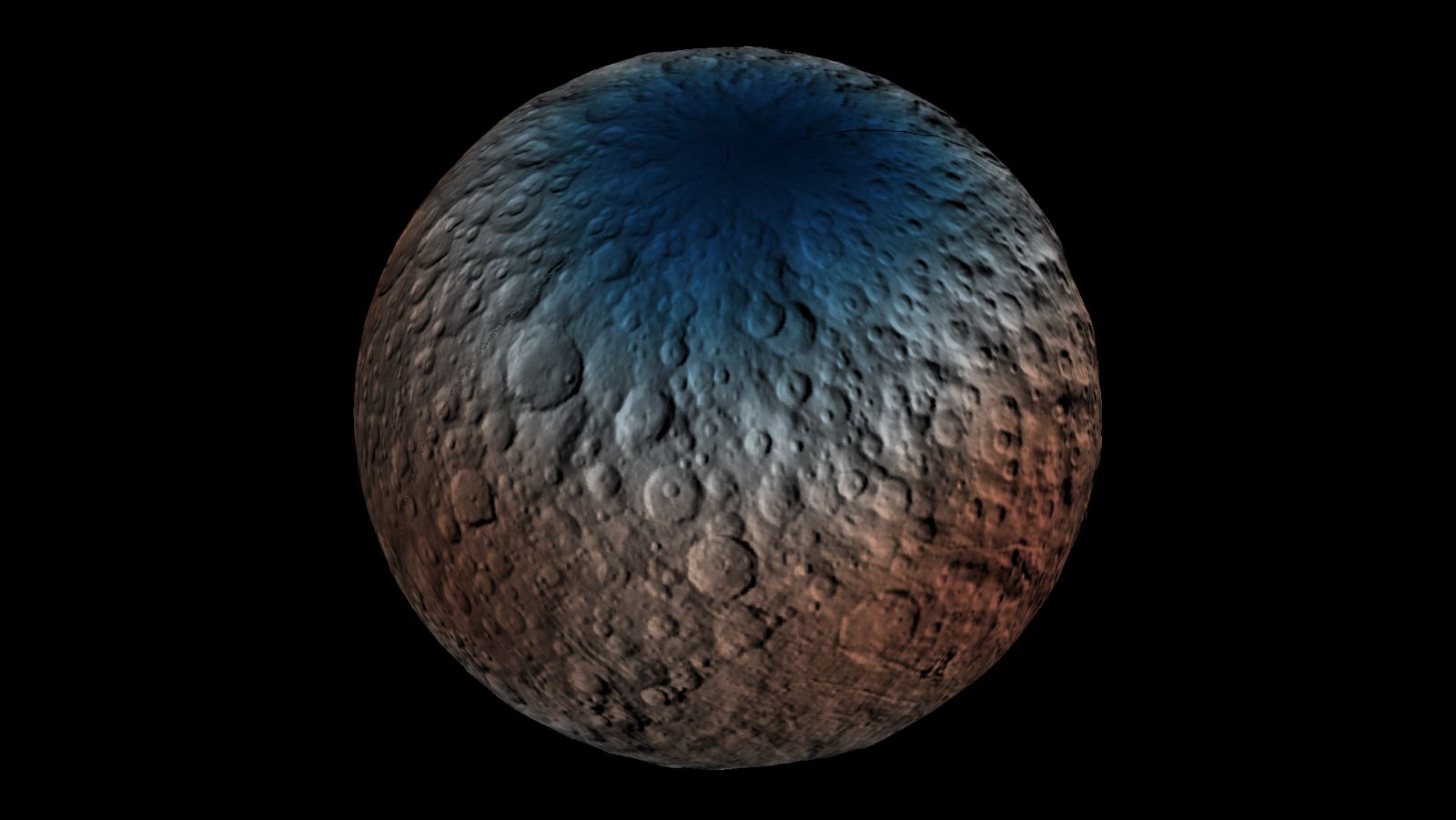 Ceres may have formed in the outer solar system

The dwarf planet Ceres may be located in the asteroid belt between Mars and Jupiter, but its composition and high water content suggest it formed in the outdoor solar system where other dwarf planets orbit.

Visited by NASA Dawn spacecraft in 2015, Ceres differs from all other objects in the asteroid belt in several ways. It has a diameter of 588 miles (946 kilometers) and is spherical because rounded by its own gravity. Only two other objects in the belt, Vesta and Pallas, are even nearly round.

While asteroids are mostly clumps of rock held loosely by chemical bonds, Ceres has the shape and complexity of a planet, and its mass is equivalent to a third of the total mass of the asteroid belt.

Like the telluric planets, Ceres is differentiated into core, mantle and crust. Its crust, or surface, which Dawn mapped, is a mixture of water, clay, and carbonates. Its mantle is made up of water ice while its core is made up of rock.

Beneath its surface, Ceres may harbor remnants of a subterranean ocean, much like those that exist on Pluto and on icy moons like Europa and Enceladus.

Ceres’ surface also contains high levels of ammonia, a substance not found on other objects in the asteroid belt but much more common in the outer solar system. The heat from the Sun generally evaporates the ammonia in the region between Mars and Jupiter. More remote regions like the Kuiper Belt are colder, so volatiles like ammonia are much more common.

With a low density of 2.2 grams per cubic centimeter and low reflectivity, Ceres somewhat resembles carbonaceous chondrites, also known as C-type asteroids. They are the most common asteroids in the belt, and many are located relatively close to Ceres.

However, C-type asteroids have nowhere near the same amount of water as Ceres and do not contain ammonia.

Noting these differences, a team of scientists led by Rafael Ribeiro de Sousa of University of Sao Paulo in Brazil propose that Ceres was born somewhere beyond the orbit of Saturn in an article recently published in the journal Icarus.

This same outward migration of the gas and ice giants could have led to Neptune’s capture of Triton, its largest moon, which once would have orbited the Sun on its own.

“The results of our numerical simulations support the idea that some Ceres-sized planetestimals could have been implanted from the trans-Saturnian region into the asteroid belt by a combination of close encounters with giant planets, with other protoplanets, a gas trail, chaotic scattering, and average motion resonances with Jupiter,” the researchers note in the paper.

According to computer simulations carried out by the researchers, as many as 3,500 small planets the size of Ceres had to exist in the outer solar system for just one to survive the numerous collisions of the solar system’s early years and end up in the location of Ceres. .

Laurel Kornfeld is an amateur astronomer and freelance writer from Highland Park, NJ who enjoys writing about astronomy and planetary science. She studied Journalism at Douglass College at Rutgers University and earned a Graduate Certificate of Science from Swinburne University’s Online Astronomy Program. His writing has been published online in The Atlantic, the guest blogging section of Astronomy magazine, the UK Space Conference, the IAU General Assembly 2009 journal, The Space Reporter and various club newsletters of astronomy. She is a member of Amateur Astronomers, Inc. based in Cranford, NJ. Particularly interested in the outer solar system, Laurel made a brief presentation at the 2008 Great Planet Debate held at Johns Hopkins University’s Applied Physics Laboratory in Laurel, MD.