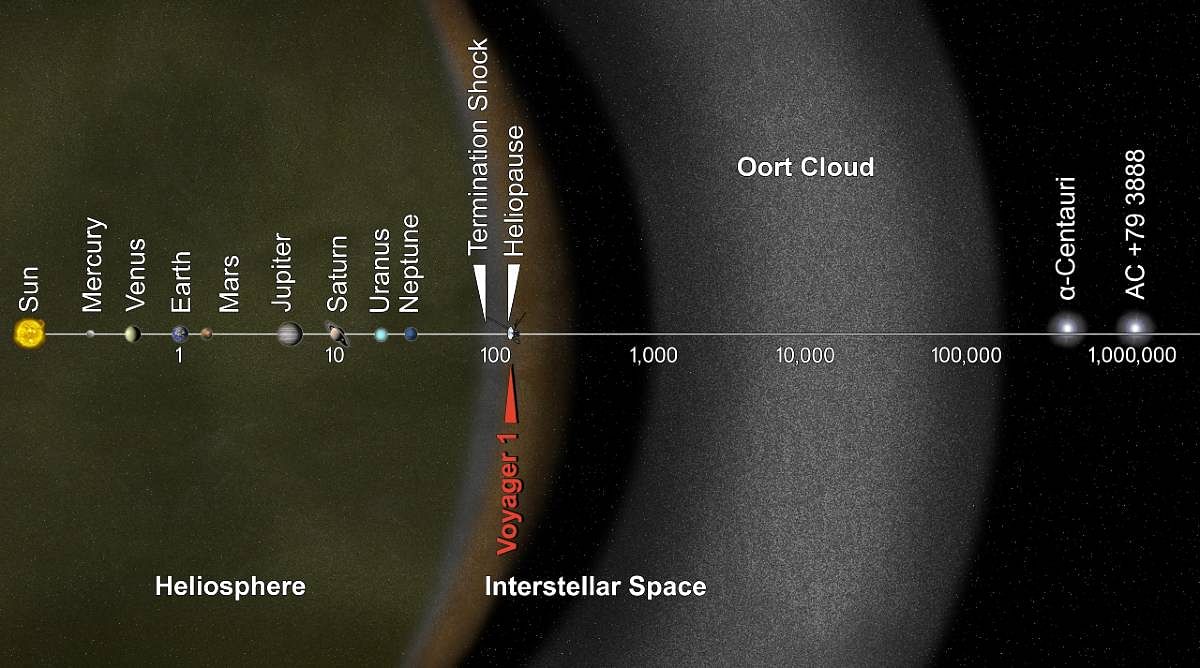 
New Delhi: Scientists have discovered that the Oort Cloud, a spherical layer of icy objects on the edge of the solar system, could harbor countless interstellar objects belonging to our solar system.

In 2019, astronomers spotted a rebellious comet from another star system in our solar system. Named Borisov, the frozen snowball was the first and only interstellar comet ever detected by man.

Prior to the detection of the first interstellar comet, theory about the formation of planetary systems suggested that there should be fewer visitors than permanent residents.

The latest study, which makes calculations based on the conclusions drawn from Borisov, suggests that interstellar visitors outweigh objects originating in the solar system.

The Oort Cloud spans an area between 200 and 10,000 billion kilometers from the Sun, and unlike stars, Oort Cloud objects do not produce their own light. These two factors make the debris in the outer solar system difficult to see.

Observations with next-generation technology can help confirm the team’s results. The launch of the Vera C. Rubin observatory in Chile, scheduled for 2022 for example, will perhaps detect many more visitors like Borisov. Read more.

Scientists have discovered a mine of tools made from elephant bone in Italy, dating back around 400,000 years, some of which would only become objects of common use 100,000 years ago.

Although the use of bone tools was common at the time, it was the way they were made that impressed scientists.

Researchers recovered the tools from a site called Castel di Guido not far from modern Rome. Hundreds of thousands of years ago, there was a stream that attracted thirsty 13-foot-tall creatures called straight-tusked elephants.

Scientists believe elephants would sometimes die of natural causes near the stream, and ancient humans put the remains to good use.

These Stone Age dwellers produced tools using a systematic and standardized approach, much like a single individual working on a primitive assembly line.

The team believe humans at the time were breaking elephant long bones in a standardized way and producing standardized parts to make bone tools. This kind of skill did not become mainstream until much later.

About 400,000 years ago, Neanderthals were just beginning to emerge in Europe. Researchers suspect that these ancient humans (whose tools have now been found) were in fact Neanderthals.

Some of the tools were sharp and could have been used to cut meat. Others were wedges that might have been useful for splitting heavy elephant femurs and other long bones.

The team also discovered a single artifact carved from a bone of wild cattle that looks like what archaeologists call a “smoother,” or straightener, a type of tool that ancient humans used to process leather. But such tools did not become mainstream until about 300,000 years ago. Read more.

Scientists have identified a hair-like protein hidden inside bacteria that serves as a sort of on-off switch for nature’s ‘power grid’, which is a global network of nanowires generated by bacteria that permeates all oxygen-free soils and deep ocean floors.

Scientists hope to use this natural power grid to generate electricity, new biofuels, and even self-healing electronic components.

However, how these soil bacteria exhale electricity has remained a mystery. Since 2005, scientists thought that nanowires were made of a protein called “pili” that many bacteria present on their surface.

However, scientists have found that these nanowires are made up of totally different proteins.

For the new study, the researchers used electron cryomicroscopy to reveal that this pili structure is made up of two proteins and that instead of serving as nanowires themselves, the pili remain hidden inside bacteria and act as pistons, pushing the nanowires into the environment. Read more.

Continents could merge into a supercontinent in 250 million years

Using computer models to travel in time, the researchers predicted two possible scenarios for the evolution of the Earth, 250 million years later. Both involve all the continents moving together to form the next supercontinent.

The first scenario predicts the formation of the Aurica supercontinent, a low latitude supercontinent. Aurica will have very little snow or ice and an average temperature of around 20 degrees Celsius.

The second possibility is that a super continent called Amasia forms at a high latitude, with a smaller Antarctic subcontinent in about 200 million years. Amasia will be a continent dominated by snowfall and ice caps.

This bright, white supercontinent will reflect more solar heat and have a climate similar to that of Earth’s last ice age.

The researchers said these predictions of how Earth might evolve could help find exoplanets (planets outside the solar system) that may once have hosted life. Read more.

Read also : Reason for Jupiter’s high temperature and how Stonehenge survived the test of time

A Russian space official this week voiced concerns about the deterioration of the Russian segment of the International Space Station, warning that obsolete hardware could lead to “irreparable failures.”

According to Vladimir Soloviev, chief engineer of the rocket and the space company Energia, 80% of the flight systems in the Russian segment have reached the end of their service life.

Energia, a maker of spacecraft and space station components, is the primary developer of the Russian section of the ISS, a joint venture with the United States, Canada, Japan and the European Space Agency.

Russia had previously indicated that it plans to leave the ISS after 2025 and launch its own orbital station. The official also said that small cracks were found on the Russian Zarya cargo module. Launched in 1998, it is one of the oldest modules of the ISS.

In addition, in July, the entire ISS had briefly tilted out of orbit after the thrusters of a new Russian module re-ignited several hours after docking. Read more.

Read also : Water vapor found in Ganymede’s atmosphere and origin of the asteroid that killed the dinosaurs

India is all the more in need of free, fair, uninhibited and questioning journalism as it is facing multiple crises.