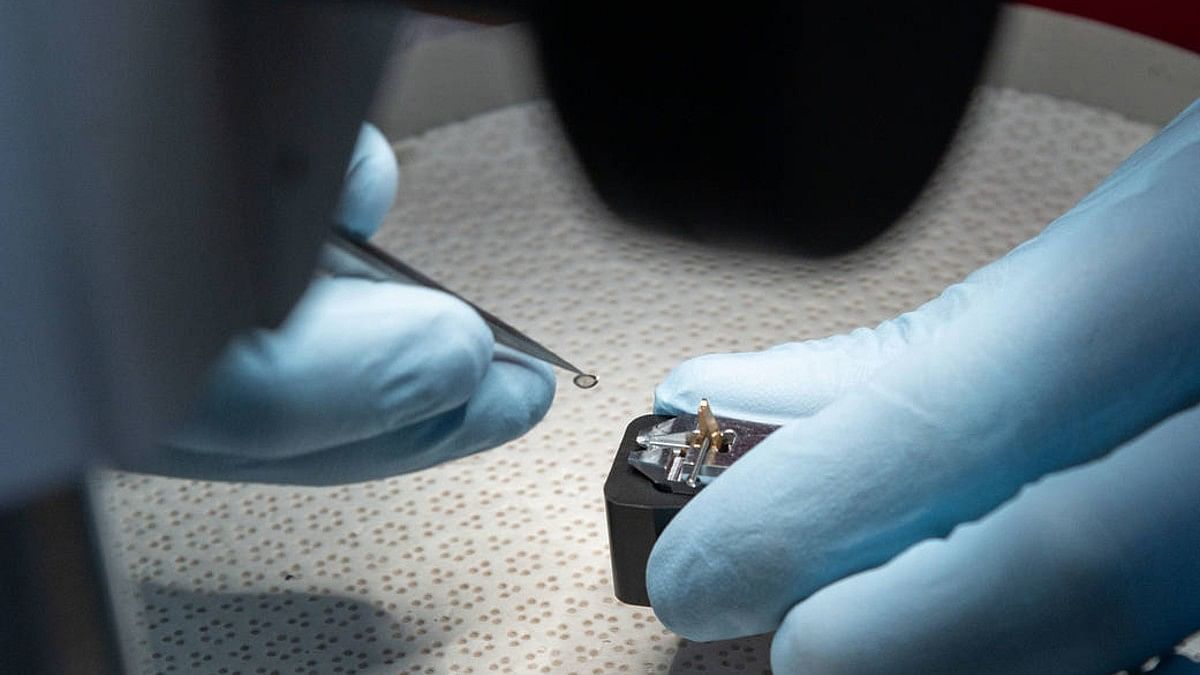 New Delhi: Scientists have now confirmed the presence of dust grains in asteroid Ryugu that are older than our own solar system.

The priceless dust samples were collected by the Japanese spacecraft Hayabusa-2 which orbited the near-Earth asteroid Ryugu for two years, according to the study, adding that the spacecraft began its mission in 2014.

Located 300 million kilometers from Earth, Ryugu is probably made up of the debris of several other asteroids.

Since the dust sample collected by the probe returned to Earth, researchers around the world have tested it in different ways.

When studying one of the samples, an international team of researchers compared them to grains found in carbonaceous chondrite meteorites found on Earth. They noted that only 5% of these meteorites contained grains that predate the creation of the solar system. — some of which have been dated to 7 billion years ago.

The researchers found that the dust sample contained grains identical to all others that have been seen in meteorites, showing that it also predates the solar system. They note that one in particular, a silicate known to be very easily destroyed, had to be somehow protected from sun damage. Read more

Researchers have discovered a huge new mosasaur — a marine reptile — from Morocco, named Thalassotitan atrox which grew up to 9 meters long.

Thalassotitan hunted other marine reptiles such as plesiosaurs, sea turtles, and other mosasaurs. Mosasaurs were distant relatives of modern iguanas and monitor lizards.

The mosasaurs looked like a Komodo dragon with fins instead of legs and a tail fin shaped like a shark. They became larger and more specialized during the last 25 million years of the Cretaceous.

Some have evolved to eat small prey like fish and squid. Others crushed ammonites and clams. The new mosasaur, Thalassotitan atrox, evolved to prey on all other marine reptiles.

Thalassotitan had an enormous skull measuring 1.4 meters and reaching nearly 9 meters in length, the size of a killer whale. While most mosasaurs had long jaws and slender teeth for catching fish, Thalassotitan had a short, broad snout and massive, conical teeth like those of an orca. These allow it to grab and tear apart huge prey. These adaptations suggest that Thalassotitan was an apex predator, sitting at the top of the marine food chain. Read also

Read also : Ancient rocks reveal how Earth’s magnetic field bounced back to save life on the planet

Unprecedented smoke released by Australia’s catastrophic bushfires has dramatically affected the hole in Earth’s ozone layer, a study has found.

According to the study published in the journal Scientific Reports, the fires — which burned 5.8 million hectares of eastern Australia in late 2019 and early 2020 — triggered the formation of pyrocumulonimbus clouds.

Pyrocumulonimbus clouds can cause fire tornadoes and thunderstorms. Those clouds threw more smoke into the atmosphere than the previous record, set by the 2017 North American wildfires.

The fires have also prolonged the Antarctic ozone hole, which appears over Antarctica every spring and reached record highs in observations in 2020.

However, researchers warn that because climate change will increase the frequency and intensity of bushfires, similar events — in which pyrocumulonimbus clouds blow smoke high into the stratosphere — will become more likely. Read more

Fossils of the oldest human species indicate that our ancestors started walking on two feet much earlier than expected, according to a new study.

Bipedalism is considered a milestone in human evolution. However, there is no consensus when it first evolved, due to the lack of fossil remains.

A research team, associating researchers from the CNRS and the University of Poitiers, looked at three bones of limbs of the oldest human representative currently identified, Sahelanthropus tchadensis.

At 7 million years old, Sahelanthropus tchadensis is considered to be the oldest representative species of humanity.

The structure of a femur bone analyzed by the team indicates that Sahelanthropus was generally bipedal on the ground, but probably also in trees. Read more

Scientists from the Zoological Society of London and the Chinese Academy of Sciences have said one of the ocean’s gentlest giants, the dugong, is functionally extinct in China.

A “functionally extinct” organism is an organism that may still have a few living individuals but whose population will never recover.

Records of dugongs in Chinese waters declined rapidly from the 1970s due to human activities including fishing, ship strikes, and human-caused habitat loss.

With no records or evidence of their presence in China since 2008, the study shows strong indications that this is the first functional extinction of a large mammal in Chinese coastal waters.

The dugong is the only strictly herbivorous marine mammal. Since 1988, China’s State Council has classified it as a Level 1 National Key Protected Animal, placing it under the highest protection offered in the country.

Dugongs can be found in the coastal waters of tropical and subtropical countries, from East Africa to Vanuatu, and as far north as the islands of southwestern Japan, but they are globally threatened and classified as ” vulnerable” by the International Union for Conservation of Nature. (IUCN). Read more