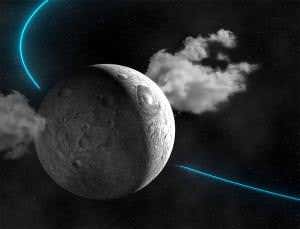 The dwarf planet Ceres has been caught sprouting water vapor, possibly from a buried layer of ice or even muddy volcanoes.

“This is the first clear detection of water in the asteroid belt,” says Michael Küppers of the European Space Agency. It saves indirect signs of water on other asteroids – good news for space miners hoping to use this water as fuel.

Ceres is the largest object in the asteroid belt, the ring of space rocks between the orbits of Mars and Jupiter. It is so massive that its own gravity makes it almost round, like a planet, earning it the title of dwarf planet alongside Pluto and three other objects beyond Neptune’s orbit.

Astronomers believed that main-belt asteroids were too close to the sun to stay wet, and that only comets from the outer reaches of the solar system were able to cling to water ice. But recently objects from the asteroid belt have been spotted with comet-like tails of dust streaming behind them, suggesting they too have solid ice on their surfaces that is vaporizing and releasing dust. in the space.

Also, NASA Dawn Spaceship well observed the asteroid Vesta. He spotted gullies that could have been carved out by short-lived currents of liquid water. It is likely that these were created when meteorite impacts melted the surface ice, according to work presented at a meeting of the American Geophysical Union in December 2013.

Tantalizing hints of water molecules smashing above Ceres’ surface had appeared in earlier observations. Now ESA’s Herschel spacecraft has spotted the water vapor directly. The telescope’s infrared eye first saw signs of this vital substance around Ceres in October 2012. A 10-hour observation in March 2013 then helped the team link the vapor to dark patches on its surface.

This link suggests that meteorite impacts could have exposed a layer of ice beneath the dusty surface of the dwarf planet, causing the ice to vaporize in open areas. Or the core of the small world may still be hot enough from the heat of its formation to erupt ice volcanoes.

We should soon know for sure: The Dawn spacecraft is due to arrive at Ceres in 2015 for its first close inspection.

“We expect to see a very interesting surface,” says lead researcher Christopher Russell of the University of California, Los Angeles. Finding water among asteroids leads us to a more nuanced understanding of these objects, considered leftover matter from the birth of our solar system, he adds.

“We started with a simple and very naive vision: think of rock and iron, and forget about the little details like the amount of water that accompanies these materials,” he says. let’s study something, our concept matures. We put a little color, a little structure and in this case we put a little water. It’s not so different from an artist painting a picture.