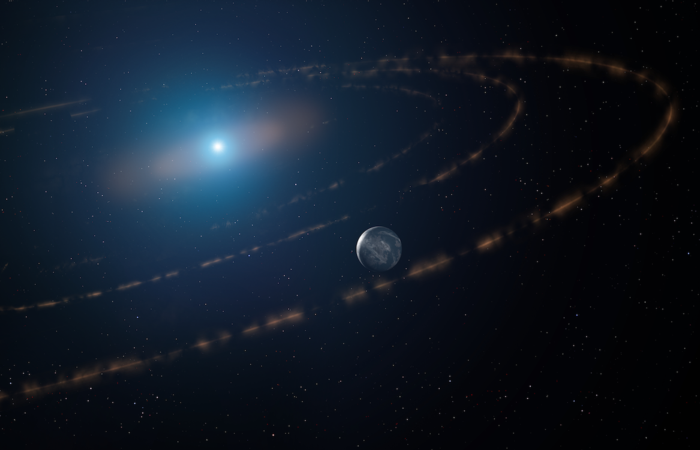 The National Aeronautics and Space Administration (NASA) and the European Southern Observatory (ESO) have recently glimpsed the distant future of Earth.

The white dwarf star and the exoplanet that orbits it are located 117 light-years from Earth in the constellation Crater, according to the News 9 Live report.

What did TESS see?

The habitable zone, also known as the “Goldilocks zone”, is generally defined as where liquid water can exist on the surface of a rocky planet.

The researchers also noticed “sharp light dips,” or times when a star’s light gradually rises and falls over a significant duration. They did this using ESO’s new technology 3.5 meter telescope at the La Silla Observatory in Chile.

The light troughs from WD1054-226 correspond to 65 “equidistant” clouds of planetary debris that orbit the star every 25 hours, the scientists noted. As such, the regular distribution of space junk suggests that an Earth-sized terrestrial planet could hold everything in place.

Only one other planet has been discovered orbiting a white dwarf. However, this planet turned out to be a gas giant, a planet similar to Jupiter of our solar system, and far from the habitable zone of the white dwarf star.

A white dwarf star is the last stage of stars eight times more massive than the Sun in our solar system after they become a red giant. The transformation of a star into a white dwarf occurs when a star runs out of hydrogen to fuel itself. Scientists predict that the Sun will undergo this transformation in about five billion years.

What this means for science

The researchers were initially surprised by their findings. Astrophysicist Jay Farihi of University College London said the possibility of a major planet in the habitable zone is “exciting and also unexpected; we weren’t looking for that,” according to the Royal Astronomical Society website.

If the researchers were right, the discovery of the exoplanet would be a breakthrough for white dwarf science.

However, Prof Farihi cautioned about the procedures needed to confirm the presence of the exoplanet as it cannot be directly observed on Earth.

“We cannot observe the planet directly, so confirmation can come by comparing computer models with other observations of the star and orbiting debris,” Prof Farihi said.

Prof Farihi is the lead author of the study that found hints of a rocky exoplanet around WD 1054-226, which is published in the Monthly Notices of the Royal Astronomical Society.