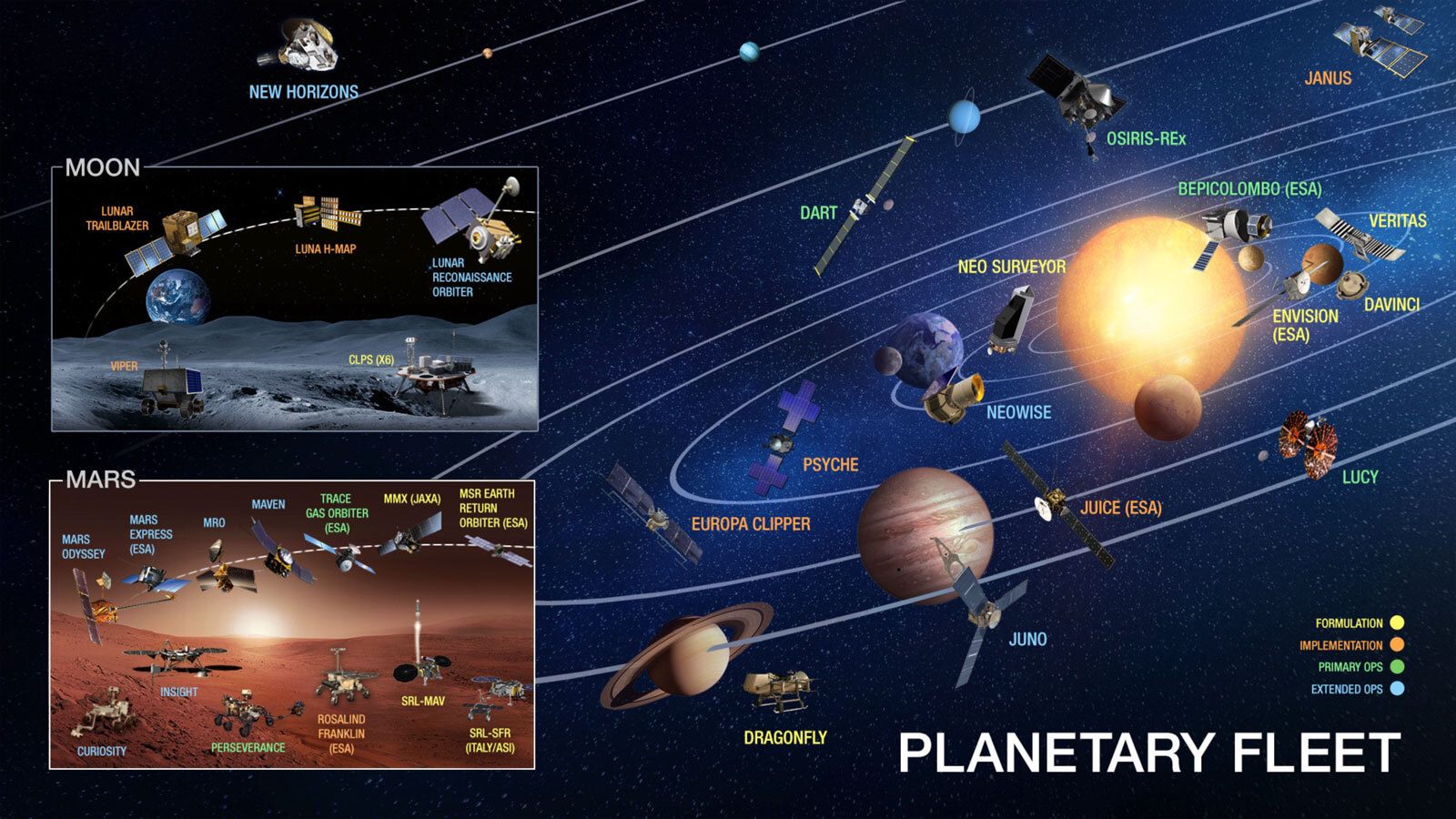 Following a thorough evaluation, NASA has extended the planetary science missions of eight of its spacecraft due to their scientific productivity and their potential to further our knowledge and understanding of the solar system and beyond.

These missions have been selected for continuation, assuming their spacecraft remain in good condition:

“Extended missions provide us with the opportunity to leverage NASA’s significant investments in exploration, allowing science operations to continue at a cost far below the cost of developing a new mission,” said Lori Glaze, director of the Planetary Science Division at NASA Headquarters in Washington. “Maximizing taxpayer dollars in this way allows missions to gain valuable new science data and, in some cases, allows NASA to explore new targets with entirely new science goals.”

Most assignments will be extended for three years; however, OSIRIS-REx will be continued for nine years in order to reach a new destination, and InSight will continue until the end of 2022, unless the spacecraft’s electrical power permits longer operations.

Each extended mission proposal was reviewed by a panel of independent experts from academia, industry and NASA. In total, more than 50 reviewers assessed the scientific return of the respective proposals. Two independent review chairs oversaw the process and, based on the panel’s assessments, confirmed that these eight science missions held substantial potential to continue to deliver new discoveries and address compelling new scientific questions.

In addition to providing significant programmatic benefits to NASA, several of these missions promise multidivisional science benefits across NASA’s Science Mission Directorate (SMD), including their use as data relays for landers. and Mars surface rovers, as well as to support other NASA initiatives such as as Commercial Lunar Payload Services (CLPS).

The Origins, Spectral Interpretation, Resource Identification, Security-Regolith Explorer (OSIRIS-REx) mission is currently on its way back to Earth to deliver the samples from asteroid Bennu it collected in 2020. Dante Lauretta, OSIRIS- REx PI, will remain in place for the main mission, while DellaGiustina begins her role as newly appointed PI for OSIRIS-APophis EXplorer (OSIRIS-APEX). With a new name to reflect the new objectives of the extended mission, the OSIRIS-APEX team will redirect the spacecraft to encounter Apophis, an asteroid approximately 1,200 feet (about 370 meters) in diameter that will come within 20,000 miles (32,000 kilometers) from Earth in 2029. OSIRIS-APEX will enter orbit around Apophis shortly after the asteroid’s Earth flyby, providing an unprecedented close look at this S-type asteroid. It plans to study the changes in the asteroid caused by its close flyby of Earth and to use the spacecraft’s gas thrusters to attempt to dislodge and study dust and small rocks on and below Apophis’ surface.

The Mars Atmosphere and Volatile Evolution (MAVEN) mission plans to study the interaction between the atmosphere and the magnetic field of Mars during the next solar maximum. MAVEN’s observations as the Sun’s activity level increases toward the peak of its 11-year cycle will deepen our understanding of how Mars’ upper atmosphere and magnetic field interact with the Sun.

Since landing on Mars in 2018, the Inland Exploration using Seismic, Geodetic and Heat Transport (InSight) mission has operated the only active seismic station beyond Earth. His seismic monitoring of “marsquakes” has provided constraints on the interior, formation and current activity of Mars. The extended mission will continue InSight’s seismic and weather monitoring if the spacecraft remains in good condition. However, due to dust accumulation on its solar panels, InSight’s power generation is low and the mission is unlikely to continue operations for the duration of its current extended mission unless its solar panels are cleaned by a “dust devil” passing on Mars. atmosphere.

LRO will continue to study the surface and geology of the Moon. The evolution of LRO’s orbit will allow it to study new regions far from the poles in unprecedented detail, including permanently shaded regions (PSRs) near the poles where water ice can be found. LRO will also provide significant programmatic support to NASA’s efforts to return to the Moon.

The Mars Science Laboratory and its Curiosity rover have traveled more than 27 km across the surface of Mars, exploring the history of habitability in Gale Crater. In its fourth extended mission, MSL will climb to higher altitudes, exploring critical sulfate-bearing layers that provide unique insight into the history of water on Mars.

New Horizons flew by Pluto in 2015 and the Kuiper Belt Object (KBO) Arrokoth in 2019. In its second extended mission, New Horizons will continue to explore the distant solar system up to 63 astronomical units (AU) from the Earth. The New Horizons spacecraft can potentially perform multidisciplinary observations relevant to the solar system and NASA’s heliophysical and astrophysical divisions. Additional details regarding New Horizons’ science plan will be provided at a later date.

The extended Mars Odyssey mission will perform new thermal studies of rocks and ice below the surface of Mars, monitor the radiation environment, and continue its long-running climate monitoring campaign. The Odyssey orbiter also continues to provide unique support for real-time data relay from other Mars spacecraft. Odyssey’s extended mission duration may be limited by the amount of propellant remaining on board the spacecraft.

MRO has provided a wealth of data regarding processes on the surface of Mars. In its sixth extended mission, MRO will study the evolution of the surface, ice, active geology, atmosphere and climate of Mars. In addition, MRO will continue to provide important data relay service to other Mars missions. The MRO’s CRISM instrument will be completely shut down, after the loss of its cryocooler put an end to the use of one of its two spectrometers.

NASA’s Planetary Science Division currently operates 14 spacecraft across the solar system, has 12 missions in formulation and implementation, and partners with international space agencies on seven others.

Does it portend an unknown planet?