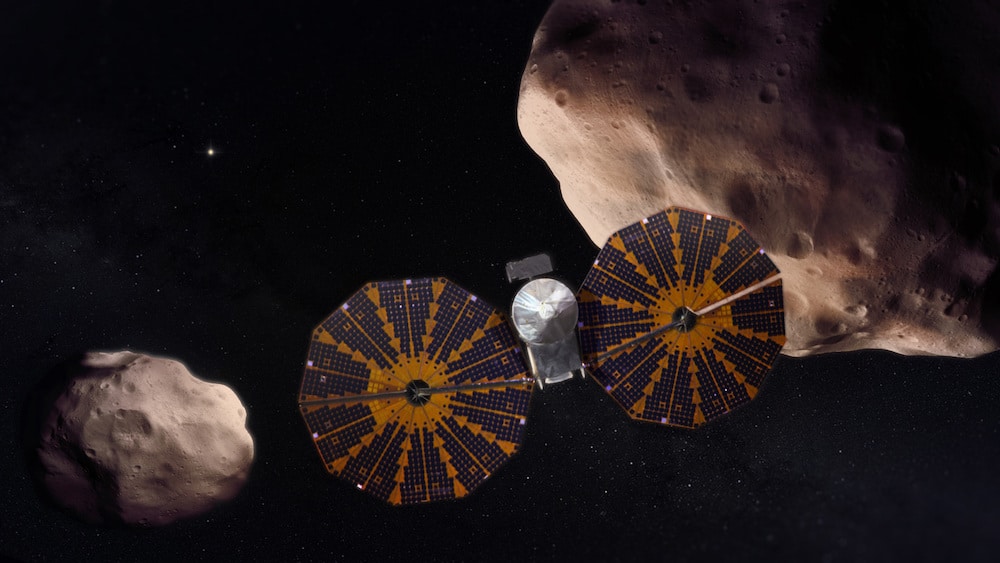 Find the “fossils” of the solar system

On February 16, 2021 at 5:34 a.m. local time, NASA launched its Lucy mission into space aboard a United Launch Alliance Atlas V 401 rocket. From Cape Canaveral, Florida, USA. The mission, in development since 2014, is now on its way to the asteroid Trojan, which orbits Jupiter.

Lucy, as the mission is named, will be NASA’s first mission (National Administration of Space and Aeronautics – United States Space Agency) visited the group of Trojan asteroids orbiting Jupiter. The Trojan asteroids are remnants of the formation of the solar system that are now trapped in Jupiter’s orbit. It should be noted that this group of asteroids is not associated with or orbiting Jupiter, but is distributed in the plane of Jupiter’s orbit orbiting the Sun.

Why is this Trojan asteroid so interesting to scientists that they have dedicated a special mission to study it?

Scientists hope that by studying ancient materials, they can uncover the history of the solar system since its initial formation, including the space environment in which planets formed and evolved.

The purpose of this mission is the inspiration for the vehicle name. Lucy’s mission is named after an ancient human fossil discovered in Ethiopia in 1974. The night after the fossil was found, archaeologists held a celebration and played the song “Lucy in the Sky with Diamonds” by the famous band The Beatles. One of the dig team members, Pamela Alderman, eventually named the newly discovered fossil “Lucy”. This name was finally chosen by NASA as the name of the mission which would search the “fossils” of the solar system to reveal its origins!

To uncover the planetary history and changing surface diversity of Trojan asteroids, the Lucy mission will perform the following observations and measurements on each asteroid:

Overall, Lucy’s ride is 16 meters in total. The bulk of the vehicle consists of two solar panels on the right and left sides of the vehicle body, each 7 meters in diameter. The body of the spacecraft, which includes instruments and communication antennas, is much smaller than the two “wings”. As can be deduced from the presence of giant solar panels, Lucy uses the power of the Sun to reach the orbit of Jupiter and accomplish her mission.

Lucy is equipped with various scientific instruments to carry out her mission:

In addition to the above equipment, Lucy is equipped with high gain antennaThis antenna will be used to communicate with Earth and conduct experiments using radio technology to determine the mass of the asteroid.

After its launch in October 2021, Lucy will make its first stage trip to a Trojan asteroid in front of Jupiter or the Lagrange 4 (L4) orbital point. During this trip, Lucy will “stop” for a flyby of asteroid (5246) Donald Johnson, which orbits the Sun in the asteroid belt. The visit was highly symbolic, as Donald Johnson, the name chosen for the asteroid, was the paleontologist who discovered the Lucy fossil.

Although symbolic, the flyover serves as a “dress rehearsal” before the implementation of the main mission. Asteroid Donald Johnson is believed to have been a fragment of an asteroid collision in the main belt, making it a fairly young asteroid. It is estimated that Lucy will arrive at Donald Johnson on April 20, 2025.

Lucy’s orbit will increase gravity to bring Lucy closer to Earth and back into Jupiter’s orbit. By the time Lucy approaches Jupiter for the second time, Jupiter and the two groups of Trojan asteroids have changed positions, and this time Lucy is walking on Lagrange 5 to visit asteroid (617) Patroclus and its twin, Menoetius . would have reached the point. 2, 2033. Fly over the asteroid These twins are planned as Lucy’s final mission.

This comprehensive itinerary includes three gravity hikes (October 2022, December 2024, and December 2030) and visits to a total of seven asteroids. When the mission ends in 2033, Lucy will be the spacecraft that will visit the solar system object with the most independent orbits.

Space missions that have reached retirement age can be abandoned (Apollo missions), destroyed (Cassini) or allowed to travel in space (Voyager 1 and 2). After completing her mission, Lucy will remain in a stable orbit that will allow her to visit this group of Trojan asteroids over and over again, if not over millions of years. In this regard, scientists keep a time capsule in the form of a gold plate containing a message for the future generation of humanity who will one day find it.

Why don’t the rings of Jupiter look like those of Saturn?