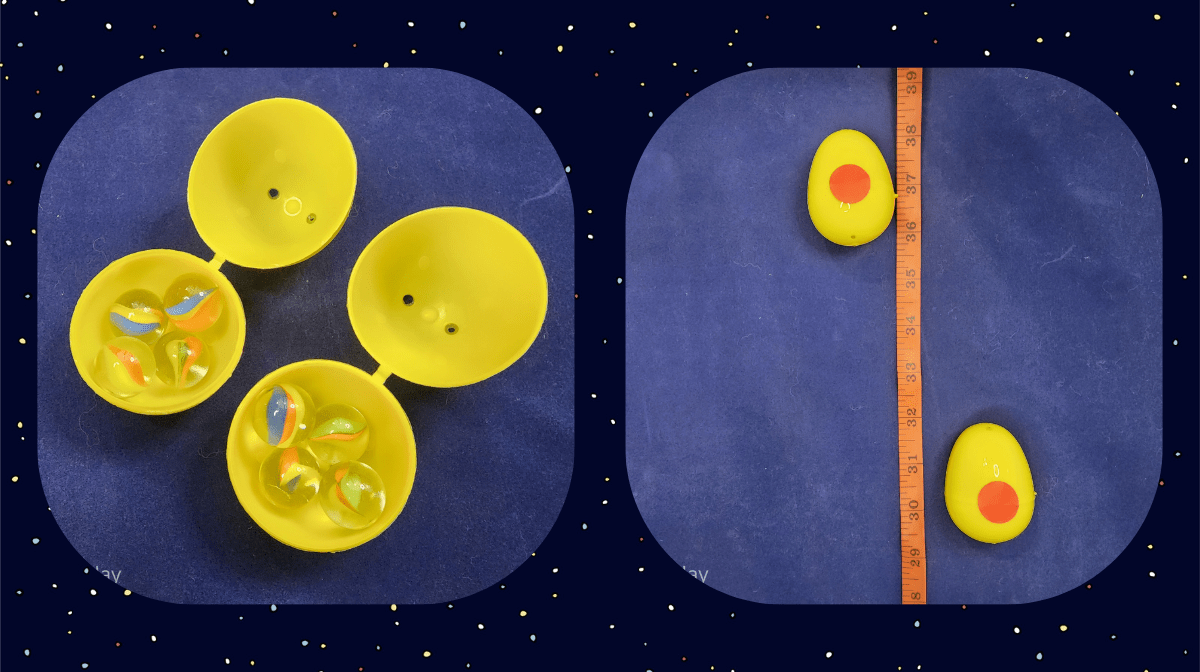 You might be thinking, “If that’s the case, why isn’t the Sun pulling me away from Earth?” After all, the Sun has far more mass than the Earth, doesn’t it? True, but the Sun is also very far away. The distance between two objects affects the strength of the gravitational force. You are closer to Earth, so Earth’s gravitational force on you is much stronger. That doesn’t mean the Sun isn’t pulling you either, you don’t feel it as strongly.

In the next two experiments, you will perform drop tests on two objects (plastic eggs) that are the same shape and size, and compare the speed at which they fall to Earth. It is important that you control or maintain the same size of the plastic eggs you drop in your experiments to be sure that things like air resistance do not affect your results.

Before you begin, read the activities below. Make a prediction about what you think will happen with each gout experience.

What happened? Did the eggs land at the same time or at different times? How did the difference in distance the egg fell affect the landing? Was it what you expected?

If desired, continue the experiment by varying the weight of one egg while leaving the other empty. Remember to change only one thing at a time, so you know which change made a difference, if any. Be sure to save your results!

What happened this time? Was it what you expected? How do the results differ from the first activity?

You may feel confused or surprised right now. Its good! Many scientists throughout time have been confused by these results. So what’s going on here?

Eggs go from not moving at all to moving quickly. When they are released like that, they are in free fall. They accelerate under the effect of the force of gravity on them. Acceleration is a change in velocity (speed) over time. Think of when you’re in the car and the driver presses the accelerator pedal. You accelerate sharply until you reach the speed at which the driver wants to drive, then he stops accelerating and maintains his speed. Our eggs also accelerate, but their rate of acceleration is constant. They accelerate at a constant pace, dictated by Earth’s gravitational pull. For all objects on Earth, gravity accelerates them to a speed of 9.75 meters per second per second (32 feet per second squared!) If you drop an object from high enough, it will continue to accelerate until the drag force of the air is sufficient to counter the force of gravity, a velocity called terminal velocitywhich is different for objects of different shapes.

So Earth’s gravity pulls the two eggs towards its center, but as you learned, mass affects gravity. But the two eggs have different masses, right? Won’t the heavier egg accelerate a little faster – and land first – because it’s more massive?

Not enough. There is another force at play. Inertia.

Imagine that you are kicking a soccer ball at rest and motionless. It’s not terribly massive, so you can hit it easily, speed it up, and move it around the terrain. Now imagine kicking a bowling ball instead of that soccer ball. Bowling balls are much more massive than soccer balls. It would take a lot more force to move it, wouldn’t it? It is inertia, the tendency of objects to remain at rest Where moving. More mass, more inertia.

Objects with more mass have more inertia. It therefore takes more force to move the heavier ball. And that’s what happens with our eggs. Of course, the heavier egg can be pulled a little more towards the Earth due to gravity and have more weight, but it also takes a little more force to move it. The gravitational pull on the egg and the egg’s own inertia cancel each other out.

Which means you end up with the constant speed of gravity pulling. Both eggs land at the same time, regardless of mass. This balance of gravity and inertia is really important to how the planets move. These two forces create the orbits of our solar system.

What about the change in fall height? As long as the distance is different enough, you’ll see the egg travel the shortest distance hitting the ground first. The eggs accelerate at the same rate and therefore match each other in speed at some point during their descent. The only difference is that an egg has a shorter path to the bottom. The less distance the egg has to travel, the less time it takes.

In space, speed matters. The closer an object is to the Sun, the faster it must move to maintain a stable orbit. This is even more important for planets closer to the Sun, as these planets are more affected by the Sun’s gravity. Thus, a planet like Mercury, close to the Sun and not very massive, must move quickly to avoid being drawn towards the Sun. Jupiter, on the other hand, is much, much heavier and much farther away, so it can move more slowly. You can experiment with patterns of orbits using this online PhET Interactive’s Gravity and Orbits Simulator.

Here are some questions to think about.