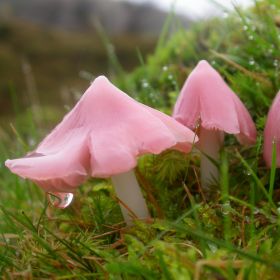 NOTES ON NATURE: The City of London rangers tending to Farthing Downs, Coulsdon Common and other treasured green spaces are as hard at work during the dark midwinter months as the rest of the year, including major projects to uncover the region’s Iron Age history.

There is no doubt that global warming will have a profound impact on people and the planet.

One of the dominant themes of the UN COP26 conference in Glasgow last month is the importance of not only reducing our carbon emissions, but also knowing how to store carbon, especially through the main protagonist: trees. .

This was the theme of a recent conference in Old Coulsdon hosted by the Friends of Farthing Downs and Happy Valley, including speakers from the Woodland Trust, the Croydon Council Street Tree Team and City of London Rangers.

While tree planting has its role to play, the recent campaign to plant more trees in the ground to offset carbon has been simplified somewhat.

The right trees in the right place: City Commons grassland has an important role in carbon capture and storage

In Glasgow, several organizations have advocated for carbon storage for grasslands, for their ability to store immense amounts of carbon – often far more than newly established forests, but with added bonuses for biodiversity. Over 38% of terrestrial carbon is stored in prairies, older and undisturbed grasslands, like those found on the Coulsdon common grounds, sequestering the most carbon.

The species-rich grasslands are also extraordinary ecosystems, with a diversity of wild plants, animals and fungi at their core – not only essential for carbon storage, they also reduce flooding, stimulate pollinators and shut down the soil erosion – all essential to support endangered wildlife, giving humans areas for recreation and for combating and adapting to climate change.

Much of the South London Downs National Nature Reserve is made up of historic or restored limestone meadows, rare nationally, and one of the main reasons why sites such as Farthing Downs and Riddlesdown are protected as sites of special scientific interest (SSSI).

The rangers, in their latest newsletter, state: â€œWhile we receive many sincere requests to plant more trees to complement the existing old growth and secondary forests, old hedges and old trees that are under our care. and from our management, the reality is that planting requires â€œthe right tree in the right placeâ€.

â€œUltimately, habitats rich in biodiversity should not be favored over more suitable places like gardens, parks and streets, where they can have the greatest impact. Much can be done to plant trees in private gardens.

â€œGardens across London have been disappearing at a staggering rate, with many paved, tarred or lost due to development to the size of 2.5 Hyde Parks per year.

IN SEARCH OF WINTER COLOR: Even in winter, Farthing Downs is always colorful, from wood beech trees to prairie mushrooms.

One of the most vibrant things to see is the wide color shapes of the waxcap mushrooms (pictured left).

These tiny mushrooms are usually the last to appear in the season and are so named because of their waxy texture. The presence of waxcaps is considered an indicator of unimproved old grassland (permanent grassland that has not been cultivated for many years).

Two of the most colorful types found on Farthing Downs are the pink waxcap Porpolomopsis calyptriformis and blackening shoe polish Conical hygrocybe (this first appears in bright red and turns black).

Unearthing the ancient past of Farthing Downs

Last month, Farthing Downs rangers met with Historic England, the government body associated with England’s historic environmental protection, to discuss the creation of new information boards that will bring the rich heritage of the region. With a small fund, there will soon be a series of panels on some of the most important heritage elements of Farthing Downs.

Digging for History: archaeologist and animator Brian Hope-Taylor working on the Downs in the 1960s

Farthing Downs is the site of a large Anglo-Saxon cemetery and over 16 graves are spread across the site in a mix of mounds and flat graves, some of which can still be seen to this day.

Etched on the duvets, there are also multiple linear features, including Iron Age terrain systems, runways, and, since WWII, ditches to prevent an airborne invasion.

There were several archaeological excavations on the Downs, including that of Brian Hope-Taylor. The most recent was conducted in 2005. Unfortunately, much of the Victorian finds are in unknown personal collections, but many finds are held in the archives of local and national museums, including the British Museum and the Ashmolean Museum. of Oxford.

With so much history in our care and protection, how to interpret it for all to discover has always been a colossal task for the City of London, and this latest project with Historic England should help unlock some of that hidden history. for the public.

News, opinions and analysis on the people of Croydon, their life and political times in London’s most diverse and populous neighborhood. Based in Croydon and edited by Steven Downes. To contact us, please email [email protected]

Peat moss isn’t good for the planet, but there’s a more sustainable…