Billions of years ago, gravity caused a large cloud of gas and dust to collapse within its own structure. The result of this collapse is the solar system we know today, made up of our star, eight planets, many moons, and a multitude of objects that roam the neighborhood we call our home in the Milky Way. . But, after all, how exactly did the solar system come about?

In addition to the seven other planets orbiting the Sun, our â€œspace backyardâ€ also has dozens of moons, several dwarf planets, millions of asteroids, comets and meteorites. Thus, the solar system goes far beyond our neighboring planets. For example, beyond Neptune’s orbit is the Kuiper Belt, a donut-shaped region that is home to frozen objects, and even Pluto, the most famous dwarf planet of this mysterious place.

Beyond the Kuiper Belt is the Oort Cloud, a large cloud of icy debris that surrounds the solar system (Image: Reproduction / M. Kornmesser / ESO)

Amidst many questions about the origins of the solar system and what it contains, lies its formation. Using radiometric dating, the method that determines the rate of radioactive decay of the elements, astronomers were able to determine that the Earth and the rest of our system are approximately 4.6 billion years old. This number does not come from the rocks of our planet, but from meteorites, fragments of ancient objects from the first period of the solar system.

Want to keep up to date with the hottest tech news of the day? Go subscribe to our new youtube channel, Canaltech News. Every day a summary of the main news from the tech world for you!

Although many ideas in astronomy have undergone drastic changes over time, the explanation for the formation of our neighborhood has changed relatively little over the past two centuries – and a Swedish scientist came in the 18th century. In 1734, a scientist and philosopher Emanuel Swedenborg proposed that the solar system originated from a large cloud of gas and dust. This idea was reused by the German philosopher Immanuel Kant, who presented a theory that a large nebula of matter, called a “solar nebula,” was part of an even larger cloud of gas and dust.

This cloud would have collapsed on its own structure and would have started a rotational movement. Then it was the turn of the French mathematician and astronomer Pierre-Simon Laplace to come up with his ideas, which suggested that the Sun had a large, warm atmosphere that extended across the solar system. This “protostellar cloud” cooled and contracted, initiating a rotational movement that expelled the matter that gave birth to the planets we know. Today, the understanding of this process has already broadened, but the main one remains.

How the solar system was formed

Currently, astronomers consider that when the molecular cloud began to collapse, it measured around 50 astronomical units (each unit equals the average distance between the Sun and Earth, around 149 million kilometers), and that was up to at three times the mass of the sun. It is still unclear whether a nearby supernova explosion or some other event triggered this collapse, but, however, as it collapsed into its structure, other ongoing processes helped accelerate the collapse of the cloud. As a result, her temperature rose and she started a spinning motion.

Depiction of the solar system at the start of its formation, with particles that gave rise to planetesimals and eventually planets (Image: Reproduction / NASA / JPL-Caltech)

This movement distributed matter on a relatively flat disk, and gravitational potential energy was transformed into heat. With this, the density increased and the disc began to spin even faster while decreasing in size; As more and more pockets of gas and dust collided and held together, a protoplanetary disc formed. But it is in the center of this that all the action took place: there, the protostar â€œbabyâ€ which became the Sun began to accumulate matter. It took nearly 50 million years for our star to get enough material to start nuclear fusion.

There, near the newly formed Sun, the temperature was high enough to allow the formation of minerals and metals; on the other side of the disc and further away from the solar heat, less volatile compounds are formed. As the disc cooled, the solids gathered and formed large blocks of mass, which gradually picked up any remaining dust. This is how rocky planets with metallic cores were born, which originate from hot rocky material near the center of the system. In colder regions, gas and ice giants are born.

Once the sun was “lit,” it released a powerful solar wind that helped push the debris further and further away from the disk. dust particles. It was at this point that the gas giant planets stopped “growing” into larger bodies. Because they are massive, they helped “clean up” the disk, helping to assemble fragments in other regions, such as the Oort Cloud and the asteroid belt between Mars and Jupiter.

The rocks that managed to escape are scattered throughout the solar system and travel aimlessly like asteroids which, as they preserved the conditions of this period, are excellent objects of study for astronomers to better understand the formation of our neighborhood. Ultimately, the rocky planets went through a period of violence, in which countless objects bombarded the surface of these worlds – today we believe this process gave birth to the Moon and several other satellites. natural of other planets, such as those of Mars. .

The solar nebula theory is widely accepted within the scientific community, but despite this, it poses a few questions that astronomers have yet to answer. For example, all planets around a star should have the same tilt relative to the ecliptic, but we know that the inner and outer planets of the solar system have quite different tilt axes. Additionally, it works well for describing the formation of rocky worlds, but it leaves doubts about gaseous.

It’s just that these massive planets take a few million years to form, and that time is more than the amount of light gas available in the early solar system – not to mention the migration of our neighbors who, when they were “babies”, should have spiraled towards the Sun. A relatively new model called “disk instability” suggests that pockets of gas and dust gathered at the start of the solar system and would form giant planets in about a thousand years. By retaining more gas and reaching a certain mass, they would have achieved greater orbital stability. 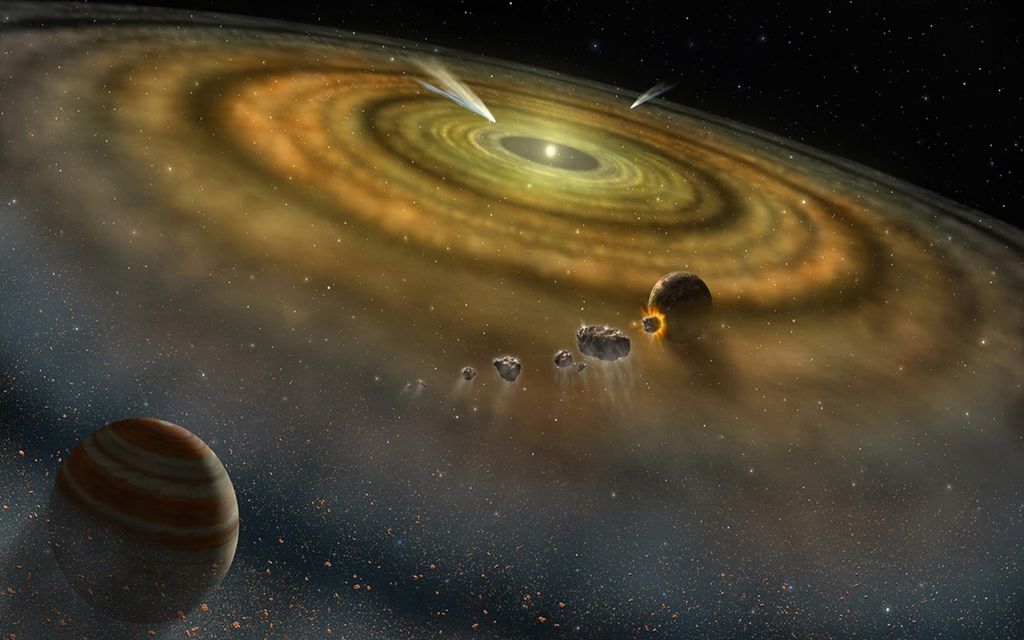 For a long time, scientists considered that planets formed where they are today, but that changed with the discovery of exoplanets, which showed that even massive objects can migrate (Image: Reproduction / NASA / FUSE / Lynette Cook)

To top it off, scientists have noticed some irregularities in the theory when studying exoplanets – and some of them are linked to the existence of so-called “hot Jupiters,” the nickname given to Gaseous gaseous planets that orbit their stars in periods of only a few days. So, astronomers have made small adjustments to the theory to solve some of these problems this way, even with many unanswered questions.

Finally, the Earth also continues to keep secrets: the evolution of the solar system did not stop after the formation of the planets, and the Earth is distinguished from other rocky planets due to the large amount of water that exists around of her. However, our planet is in a place where the temperature would be too high to collect water at the start of the solar system, which suggests that water may have come here in another way – suddenly brought in by the collision of comets, for example. .

Subscribe to your email on Canaltech to receive daily updates with the latest news from the world of technology.