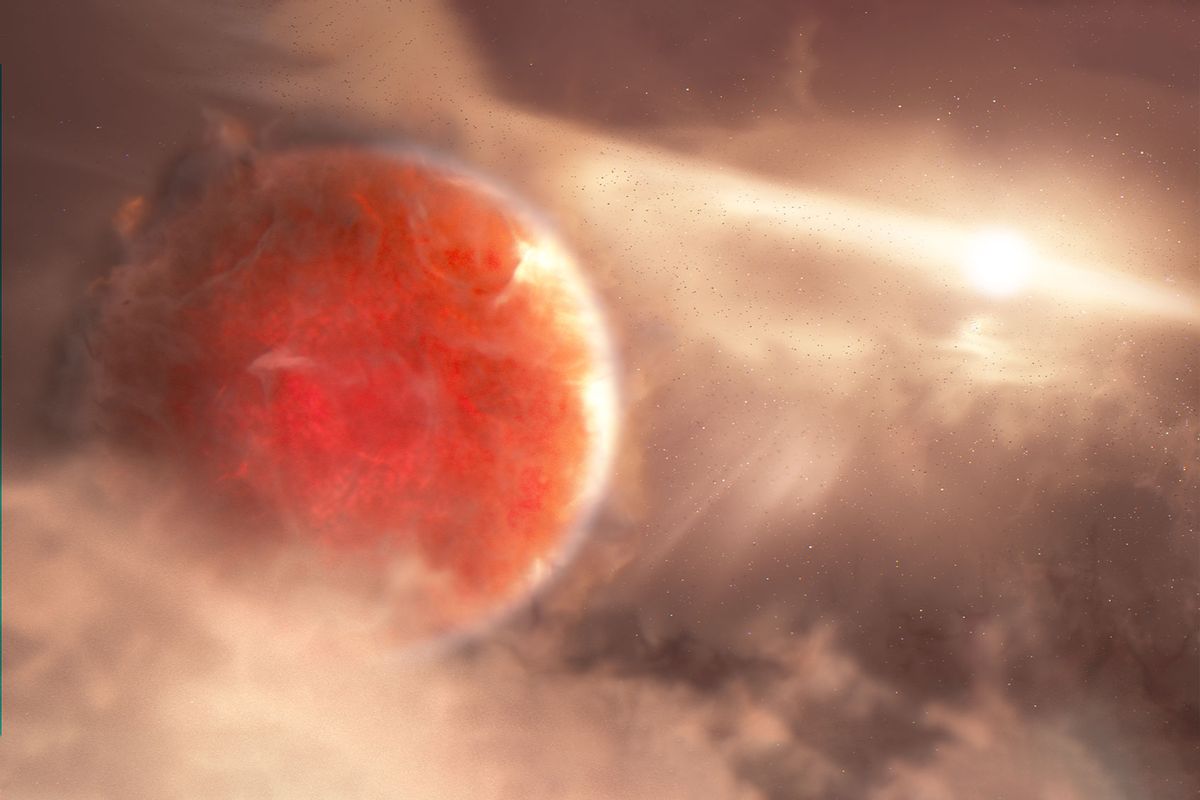 Jupiter, the largest planet in the solar system, may seem totally foreign to an Earthling. It has no immediate solid surface, but rather a gas giant, composed largely of hydrogen and helium. Its atmosphere is so dense that huge storms several times the size of Earth, like the one contained in its Giant Red Spot, persist for centuries.

But despite its bizarre makeup compared to Earth, Jupiter-like planets are actually extremely common in the galaxy. Indeed, astronomers observe gas giants of similar composition everywhere they look. It is believed that the reason Jupiter-like worlds are so common is that most solar systems like ours form in the same way. Our solar system began life as a rotating disc-shaped cloud of gas and dust; at its center point, gas slowly accreted into a star (our sun); other bits of gas and dust collected into small rocks that grew into large rocks, which eventually collected into planets.

From there, our solar system – and others like it, as we’ve observed – underwent a similar evolution: Radiative pressure from the sun pushed light gases like hydrogen and helium out of the solar system, how much they have accumulated around the outermost solar system. objects. This is what gives the solar system the interesting pattern it has, rocky inner planets with slight atmospheres of heavier gases like nitrogen, carbon dioxide and oxygen, and outer planets with (we we suspect) rocky cores and huge shells of hydrogen and helium gas.

All of this is relatively well understood. But the initial stage of planet formation – the transition from a diffuse cloud of gas and dust to a solar system with a central star and rocky and/or gaseous worlds spread out in a chain – is a bit fuzzier.

Therefore, for gaseous planets like Jupiter, the prevailing theory of their origin is known as “core accretion”, a process similar to the formation of terrestrial planets like Earth. In this theory, a planet undergoes a two-step process where the core forms via multiple collisions between planetesimals, which are essentially pieces of cosmic dust.

However, a long-debated theory of how planets like Jupiter form is known as “disk instability.” In this theory, scientists hypothesize that a planet like Jupiter forms when part of a circumstellar disk becomes dense and cold enough to be vulnerable to gravitational collapse. According to the theory, this can lead to the formation of a gaseous “protoplanet”, which is essentially an embryonic planet. But so far, scientists have not been able to directly observe such a process.

On Monday, a study published in the April 4 issue of Nature Astronomy shows that the Hubble Space Telescope directly photographed evidence of a protoplanet – called AB Aurigae – going through an “intense and violent process”. Scientists believe this is evidence that directly supports the “disk instability” theory of planet formation.

“This new discovery is strong evidence that some gas giant planets can form through the mechanism of disk instability,” Alan Boss of the Carnegie Institution of Science in Washington, DC, said in a press release. “Ultimately, gravity is all that matters, because the remnants of the star-forming process will eventually be pulled together by gravity to form planets, one way or another.”

“The interpretation of this system is extremely difficult,” Thayne Currie, lead researcher of the study, said in a press release. “That’s one of the reasons we needed Hubble for this project – a clean image to better separate the light from the disc and any planets.”

Currie said the discovery is partly due to the Hubble Space Telescope’s instruments, but also partly thanks to the telescope’s longevity. Hubble was launched into low Earth orbit in 1990 and has been in service ever since.

The immense distance from its host star meant that the object was so faint and slow that at first scientists were not convinced that B Aurigae b was a planet.

“We couldn’t detect this movement on the order of a year or two,” Currie said. “Hubble provided a time base, combined with Subaru data, of 13 years, which was enough to be able to detect orbital motion.”

Scientists say understanding how planets like Jupiter form will give them a better understanding of how our own solar system was created.

“Nature is smart; it can produce planets in different ways,” Currie said.

Ceres may have formed in the outer solar system

The strange history of the spots of Mercury