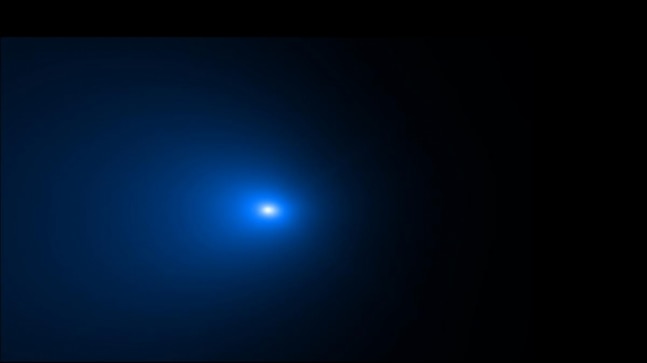 Hubble discovers the largest comet in the solar system. It takes 3 million years to go around the Sun

The Hubble Space Telescope, which has remained our eyes and ears in the mysteries of deep space, is in no mood to disappoint even after three decades of record service. The flying observatory has now revealed the largest icy comet nucleus ever seen by astronomers.

Dubbed C/2014 UN271 (Bernardinelli-Bernstein), the massive comet is nearly 128 kilometers wide and weighs 500 trillion tons. The nucleus of this mega-comet is 50 times larger than that found at the core of most known comets and its mass is one hundred thousand times greater than the mass of a typical comet found much closer to the Sun.

The previous record was held by C/2002 VQ94, which had a 96-meter-wide core discovered in 2002 by the Lincoln Near-Earth Asteroid Research (LINEAR) project. Hubble’s findings were published in the new study of The Astrophysical Journal Letters.

On the left is a photo of the comet taken by NASA’s Hubble Space Telescope Wide Field Camera 3 on January 8, 2022. A model of the coma (middle panel) was obtained by fitting the assembled surface brightness profile from the observed image on the left. This subtracted the coma, revealing the pinpoint glow from the core. (Photo: NASA)

The comet was discovered by astronomers Pedro Bernardinelli and Gary Bernstein from archival footage from the Dark Energy Survey at the Cerro Tololo Inter-American Observatory in Chile and was first observed in November 2010. At the time , the comet was nearly 4.8 billion kilometers away. of the sun.

“This comet is literally the tip of the iceberg for many thousands of comets that are too faint to be seen in the outermost parts of the solar system. We have always suspected that this comet must be big because it is so bright at such a great distance. Now we’re confirming that,” said David Jewitt, a professor of planetary science and astronomy at the University of California.

Nasa said the comet is currently too far away for Hubble to analyze clearly. So the astronomers created a computer model of the surrounding coma and adjusted it to fit the Hubble images. It should be mentioned that the Hubble data shows a bright peak of light at the location of the nucleus. Hui and his team compared the brightness of the core to earlier radio observations from the Atacama Large Millimeter/submillimeter Array (ALMA) in Chile. These combined data limit the core diameter and reflectivity.

This diagram compares the size of the solid, icy core of comet C/2014 UN271 (Bernardinelli-Bernstein) to several other comets. (Photo: NASA)

Astronomers said the comet had been falling towards the Sun for more than a million years and originated from the Oort Cloud outside our solar system, which is the nesting ground for billions of comets. The comet has an elliptical orbit around the Sun, but given its dizzying distance, it takes 3 million years to orbit the Sun.

Nasa said the comet is now less than 3.2 billion kilometers from the Sun, falling nearly perpendicular to the plane of our solar system. Despite the enormous distance, the comet experiences a temperature of 175 degrees Celsius, enough to vaporize it and give it its glowing tail.

The Oort cloud is still a theory because the countless comets that compose it are too faint and distant to be directly observed. Comets in this region did not form so far from the Sun; instead, they were thrown out of the solar system billions of years ago by a gravitational “pinball game” among the massive outer planets, while the orbits of Jupiter and Saturn were still evolving.