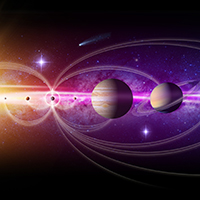 One of the main asteroid belt’s most intriguing targets, Psyche is a giant metal-rich asteroid about three times farther from the Sun than Earth. Its average diameter is about 140 miles (226 kilometers) – about one-sixteenth the diameter of Earth’s Moon or about the distance between Los Angeles and San Diego.

The psyche could be the partial core of a shattered planetesimal – a small world the size of a city or a small country that is the first building block of a planet. If so, the asteroid Psyche may offer a close examination of the interiors of terrestrial planets like Earth which is normally hidden under layers of mantle and crust.

Astronomers on Earth have studied Psyche in visible and infrared wavelengths, as well as radar, suggesting that Psyche is shaped like a potato.

Psyche orbits the Sun between Mars and Jupiter at a distance of 235 million to 309 million miles (378 million to 497 million kilometers) from the Sun. This represents 2.5 to 3.3 astronomical units (AU), 1 AU being the distance between the Earth and the Sun. Psyche takes about five Earth years to complete one orbit around the Sun, but it takes just over four hours to rotate once on its axis (a Psyche “day”).

This intriguing asteroid is now the primary target of NASA’s Psyche mission. Scheduled for launch in August 2022, the Psyche spacecraft would arrive on the asteroid in early 2026, following gravitational assistance to Mars in 2023.

For 21 months in orbit, the spacecraft will map and study Psyche using a multispectral imager, gamma-ray and neutron spectrometer, magnetometer, and radio instrument (for measuring the gravity). The goal of the mission is, among other things, to determine if Psyche is indeed the nucleus of a planetesimal.

How the asteroid Psyche got its name

Psyche was discovered by Italian astronomer Annibale de Gasparis on March 17, 1852. He named the asteroid for Psyche, the Greek goddess of the soul who was born mortal and married Eros (Roman Cupid), the god of the ‘love.