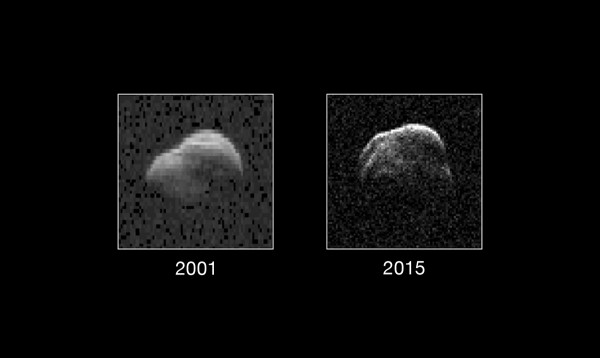 Newswise – Astronomers have developed powerful telescopes to explore the Universe. These observation tools have allowed us to understand the solar system and our place in the cosmos. But telescopes have their limits, and one of them is that they can only observe the light that reaches them. If, for example, an asteroid does not emit much radio light, then a radio telescope cannot observe it. Fortunately, sometimes astronomers can overcome this limitation with a method known as astronomical radar.

Radar is a wonderful tool here on Earth. It is used by meteorologists to measure the speed of a storm and whether a tornado could form. It’s used to measure how fast our favorite baseball pitcher can throw a ball, and can even tell us if we really deserve that speeding ticket we got. These work thanks to what is called Doppler radar. A beam of radio light is directed at an object and some of the light scatters onto the object. Since your car or baseball is moving, the broadcast radio light has a slightly different frequency than the original signal. By measuring the offset, you can determine how fast an object is moving and whether it is moving towards you or away from you. Weather radar can also use a different method using the speed of light. Since light takes a long time to travel, you can send a pulse of radio light at an object and measure the time it takes for the signal to return. This tells you how far away an object is.

With astronomical radar, astronomers can do all of this and more. But it’s not easy. Light tends to propagate as it travels, so when you direct a beam of light at an object, only part of the light hits its target. And when light scatters on the surface of an object, only part of it scatters towards the Earth. Thus, the radio signal coming back to Earth can be very weak. Sensitive radio telescopes are needed to pick up the signal. But the results are amazing.

Because the radar’s distance and motion measurements are extremely precise, astronomers can use astronomical radar to get the precise orbit of asteroids passing close to Earth. They can even map the asteroid’s surface to get a feel for its size and makeup. By scanning a radar signal through an object such as the Moon, astronomers can create a detailed image of its surface. Because some of the radio light travels across the surface before it disperses, astronomers can even see what is below the surface. This is particularly useful since some materials such as ice and metals reflect the radar more easily. Pockets of ice just below the surface appear brighter than a dry region. It was thanks to this effect that astronomers detected water ice in the polar regions of Mercury.

Astronomical radar has been around for decades, but in recent years the method has become much more powerful. New transmitter technology and sensitive radio networks provide astronomers with a wealth of data. You can see this, for example, in a collaboration between the Green Bank Observatory and the Very Long Baseline Array (VLBA) of the National Radio Astronomical Observatory. The project created high-resolution images of the lunar surface, and this is just the start.

Brian Koberlein is a science writer for NRAO. He has a doctorate. in Physics from the University of Connecticut, and has published research in physics and astrophysics. With David Meisel, he is the author of Astrophysics Through Computation, published by Cambridge University Press.