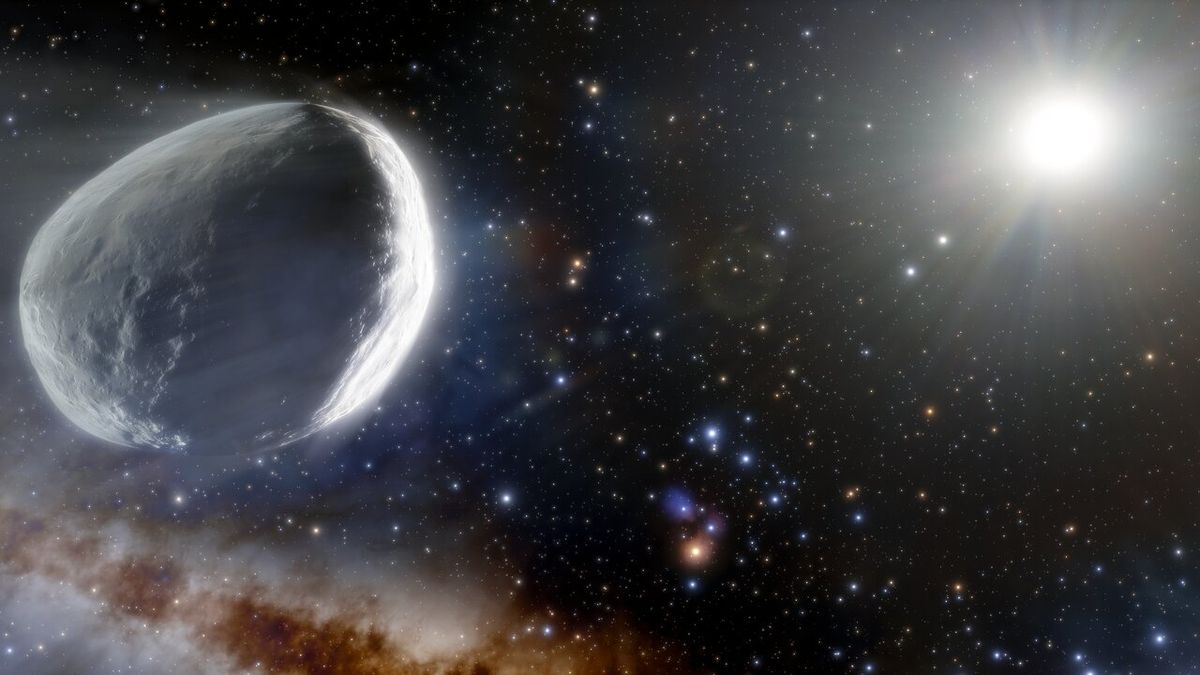 Comets other star systems, such as 2019 Borisov, visit the Sun’s vicinity more frequently than scientists had thought, a new study suggests.

The study, based on data collected Borisov zipped through Earth at a distance of about 185 million miles (300 million kilometers) at the end of 2019, suggests that the deposition of comets in the distant solar system known as Oort cloud could be full of objects that were born around other stars. In fact, the study’s authors suggest that the Oort Cloud may contain more interstellar material than domestic material.

Named after the famous Dutch astronomer Jan Oort, who first proved its existence in the 1950s, the Oort Cloud is a spherical shell of small objects – asteroids, comets and fragments – well beyond the orbit of Neptune. The cloud’s inner edge is thought to start at around 2,000 Astronomical Units (AU) from the Sun, and its outer edge is around 200,000 AU. (One AU is the average Earth-Sun distance – approximately 93 million miles, or 150 million kilometers.)

No spacecraft has ever visited the Oort Cloud, and it will take 300 years for the distant NASA Traveler 1 probe to see even the part closest to the cloud.

Astronomers have very limited tools to study this fascinating world, as objects in the Oort Cloud do not produce their own light. At the same time, these objects are too far away to reflect much of the sun light.

So how exactly did scientists find out that there must be so many interstellar objects in the Oort Cloud, and what did Borisov have to do with it?

Amir Siraj, a graduate student in the Department of Astronomy at Harvard University and lead author of the study, told Space.com in an email that he could calculate the likelihood of alien comets visiting the solar system simply. based on the fact that Borisov’s comet had been discovered.

“Based on the distance at which Borisov was detected, we estimated the implicit local abundance of interstellar comets, just as the abundance of ‘Oumuamua-type objects was calibrated by the detection of’ Oumuamua,” said Siraj.

The mysterious ‘Oumuamua, first spotted by astronomers in Hawaii in October 2017, was the first interstellar body ever detected in our own solar system. The object passed the Earth at a distance of 15 million miles (24 million km), or about one sixth of the distance between our planet and the sun. An intense debate over the nature of ‘Oumuamua ensued, as it was not clear at first whether the object was a comet or an asteroid.

Even the detection of a single object can be used for statistical analysis, Siraj said. The so-called Poisson method, used by astronomers, calculates the probability of an event occurring in a fixed time and space interval since the last event.

Given the gravitational force of the sun, Siraj and his co-author Avi Loeb, an astronomer at Harvard, were able to estimate the probability of an interstellar comet heading towards the vicinity of Earth. They found that the number of interstellar comets passing through the solar system increases with distance from the sun.

“We concluded that, in the far reaches of the solar system, and even taking into account the large uncertainties associated with the abundance of Borisov-like objects, transient interstellar comets should outnumber objects in the Oort cloud ( comets of our own solar system), ”Siraj added. .

So why have astronomers only seen a single interstellar comet so far? The answer is technology. Telescopes have only recently become powerful enough to be able to spot these small but extremely fast bodies, let alone study them in detail.

“Before the detection of the first interstellar comet, we had no idea how many interstellar objects were in our solar system“Siraj said.” The theory on the formation of planetary systems suggests that there should be fewer visitors than permanent residents. Now we are seeing that there could be a lot more visitors. “

Astronomers hope that with the arrival of next-generation telescopes, such as the Vera C. Rubin Observatory, currently under construction in Chile, the study of extrasolar comets and asteroids will really take off.

The new study was published in the Monthly Notices of the Royal Astronomical Society on Monday, August 24.

Bad astronomy | If Planet Nine exists, a map has been created to help find it.