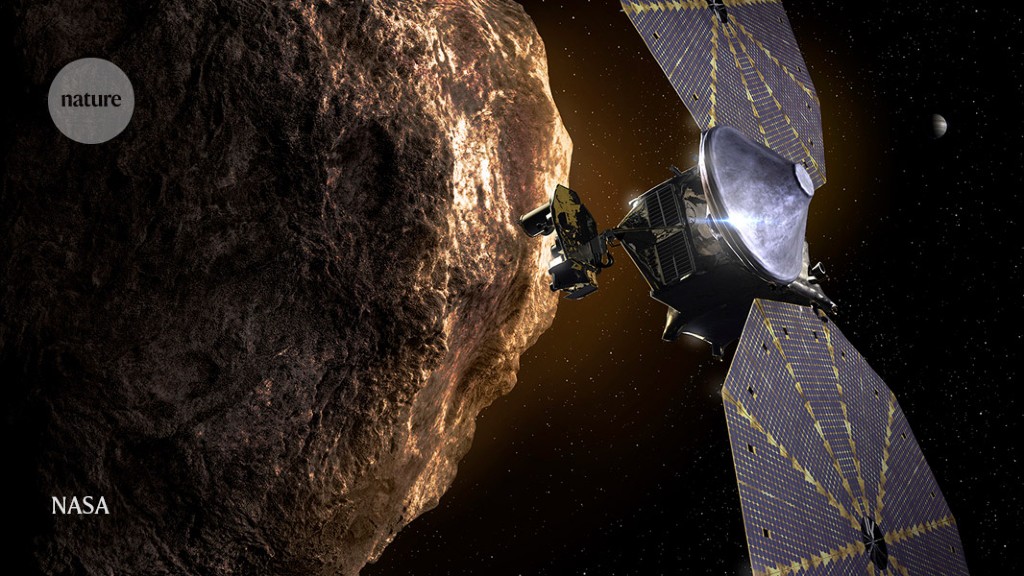 A NASA spacecraft is about to begin its journey to a realm in the outer solar system that has never been visited before: a collection of asteroids orbiting the Sun near Jupiter. The rocks are “the last unexplored but relatively accessible population of small bodies” surrounding the Sun, says Vishnu Reddy, a planetary scientist at the University of Arizona in Tucson.

The $981 million Lucy mission, which is due to lift off from Cape Canaveral, Florida on October 16, will spend the next 12 years performing gravitational gymnastics to fly past six of the asteroids, known as the Trojans, to take photos and determine their compositions. . Scientists believe the Trojans will reveal information about the formation and evolution of the solar system. The name of the mission reflects their hopes: Lucy is the 3.2 million year old hominid fossil discovered in 1974 in Ethiopia that unlocked the secrets of human origins.

Trojans “are very mysterious, which makes them really fun,” says Audrey Martin, a planetary scientist at Northern Arizona University in Flagstaff who works with the Lucy mission.

Asteroids likely formed in the far reaches of the solar system around 4.6 billion years ago, when Earth, Jupiter and other planets merged from a disk of gas and dust around the new Sun -not. In this scenario, gravitational interactions would have thrown the Trojans inward, where they now orbit as relatively pristine examples of the building blocks of the solar system.

Scientists can study Trojans to understand what distant, primeval parts of the solar system look like, without having to send a mission all the way.

Since 1991, when the Galileo spacecraft flew by the asteroid Gaspra en route to Jupiter, a number of missions have explored the solar system’s main asteroid belt, which lies between Mars and Jupiter. But no missions have ever been directed to Jupiter’s Trojans, which could be very different from main-belt asteroids. “Every time we go to new populations, we learn new things,” says Cathy Olkin, a planetary scientist at the Southwest Research Institute in Boulder, Colorado, and Lucy’s deputy principal investigator.

More than 7,000 Trojan asteroids travel near Jupiter, in two large swarms that lead and follow the planet in orbit around the Sun. Several other planets, including Mars and Neptune, also have Trojan asteroids closely following their orbits; Earth has at least two. But Jupiter has by far the most well-known Trojans.

When the solar system formed, according to a landmark model of planetary formation, the planets were much closer to the Sun than they are today. Gravitational interactions then made many of them migrate. Saturn, Uranus, and Neptune moved away from the Sun, while Jupiter moved slightly inward. In this chaos, icy bodies from the outer reaches of the solar system – the Kuiper belt, where Pluto and other small objects orbit today – were hurled inwards. Jupiter captured them and they have remained nearby ever since, essentially unchanged for billions of years. That makes it an important part of understanding the origin and evolution of the solar system, says Lori Glaze, director of NASA’s Planetary Science Division at the agency’s headquarters in Washington DC.

Perhaps due to their turbulent origin, the Trojan asteroids – named after characters in Homer’s epic poem the Iliad — have a wide variety of colors, shapes and sizes1. Lucy will visit six of them in a bid to find out why they are so diverse2. Spacecraft targets include Eurybates, a 64-kilometer-wide remnant of a massive cosmic collision, and its tiny moon Queta, discovered last year with the Hubble Space Telescope3. Others are the 20-kilometre-long, football-shaped Leucus and the pair known as Patroclus and Menoetius, which orbit each other and are both around 100 kilometers across. diameter. Such binary asteroids are common in the Kuiper Belt, but not, as far as scientists can tell, among Trojans.

After launch, Lucy will make several loops past Earth to gain the gravitational boost needed to head towards her first target, Eurybates, which she won’t reach until 2027. The Final Flyby, by Patroclus and Menoetius , won’t take place until 2033. “You absolutely have to be patient when trying to explore the outer solar system,” says Olkin.

Propelled by two 7.3 meter wide solar panels, Lucy will fly past each asteroid at a speed of 6 to 9 kilometers per second, taking measurements such as the asteroid’s color, composition, rotation and mass.4. Anything the mission finds will almost certainly rewrite textbook entries on Trojan asteroids, Reddy says. “We could throw all our training models out the window.”

Bad astronomy | Presolar grains in meteorites formed in other stars