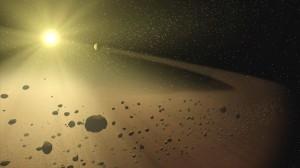 For years, astronomers have claimed that our solar system’s main asteroid belt contains the destroyed, or even “exploded,” remains of one or more life-size planets.

What could have plausibly caused such massive destruction — down to meter-sized rock objects — is open to debate.

Internet forums are teeming with ideas—invoking everything from “matter-antimatter” explosions to warmongering “aliens”.

If that’s not enough, there have even been claims that Mars itself is actually the scattered former moon of such an exploded planet.

It’s the kind of speculative tidbit that makes for great late-night radio, but it’s complete anathema to mainstream planetary science.

Millions of rocky objects still inhabit the Main Belt, ranging from the newly reclassified dwarf planet Ceres, which at 1,000 kilometers across remains the largest known body in the belt, to scales completely undetectable with current technology. But even if all the main belt material were swept away to make a single body, there still wouldn’t be enough to make a full-sized Earth-mass planet.

So, as MIT planetary scientist and Main Asteroid Belt expert Nick Moskovitz points out, the belt could never have hosted a planet large enough to claim Mars as a satellite.

Even assuming at the time of its formation that the belt was 100 times more massive than today, he says, its total mass would have been only about half that of Mars. So the “host planet” should actually be smaller than its satellite.

“There is not a single concrete piece of evidence that would suggest there was ever a life-size planet in the asteroid belt,” Moskovitz said. “In the Main Belt region, it is dynamically impossible in the presence of Jupiter’s gravitational influence for small bodies to collide and stick together to form a full-sized planet.”

In truth, the mass of the main belt—which extends just past Mars’ orbit about three and a half times the distance from Earth to the Sun—hasn’t changed much over the past 4, 5 billion years of life of the solar system.

Moskovitz says the belt we see today is the result of a population of bodies that spent the next 4.5 billion years interacting and colliding with each other.

Although the downward trending diagrams of the Main Asteroid Belt make it incredibly dense, the region has significant gaps, clusters and clusters. And if someone was actually aboard a spacecraft traveling through the area, chances are the next closest slab of rock will be at least a few hundred thousand miles away.

At first, Moskovitz says the entire solar system probably looked like a belt of giant asteroids. Then, as planets formed, they shed nearby matter.

However, since there are no planets in the asteroid belt, it remains something of a relic dumping ground for materials from across the solar system.

But it’s arguably best suited as an asteroid Rosetta Stone to interpret the evolutionary twists and turns of our own solar system.

Even though the main belt represents only a small fraction of the total extent of our solar system, as Moskovitz points out, the belt is full of a great diversity of geological histories. It also continues to serve as a theoretical point of comparison with the internal dynamics of many recently discovered extrasolar planetary systems.

Partly because of this, many planetary theorists now believe that our four outer gas giant planets—Jupiter, Saturn, Uranus, and Neptune—in fact formed much closer together and farther apart than their current orbits indicate.

But cataclysmic gravitational interactions between Jupiter and Saturn caused these juggernauts to migrate to their current orbits.

“These rearrangements caused a lot of chaos in the main belt,” Moskovitz said. “During its first few hundred million years, the entire architecture of the solar system changed dramatically.”