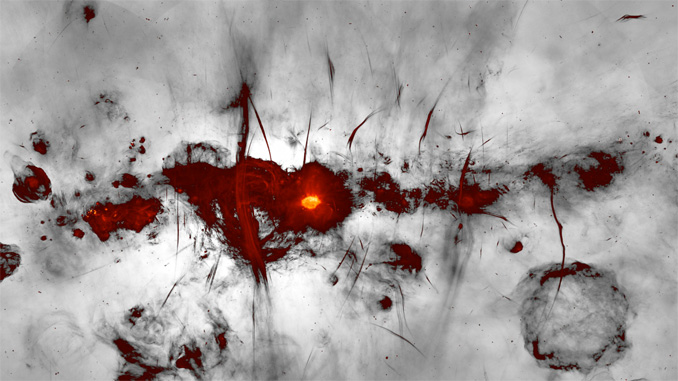 Have you ever wondered what you could see if your eyes were sensitive to radio waves instead of visible light? Then see the latest images from the 64-antenna MeerKAT radio telescope in South Africa, revealing the heart of the Milky Way as seen in radio broadcasts.

The imagery is based on detailed analysis of a survey performed during the commissioning of the telescope, resulting in a mosaic of 20 observations captured over 200 hours of telescope time. The result is a 100 megapixel mosaic with a resolution of 4 arc seconds.

Images reveal never-before-seen supernova remnants, including a rare, nearly perfectly spherical example, as well as numerous stellar nurseries, cirrus-like emissions made up of numerous parallel radio filaments, and a fascinating sight of ‘the Mouse’, a runaway pulsar . possibly ejected in a supernova explosion.

“I spent a lot of time looking at this (mosaic) working on it, and I never get tired of it,” says Ian Heywood of the University of Oxford, Rhodes University and South African Radio Astronomy Observatory. . He is the lead author of a study in The Journal of Astrophysics.

“When I show this image to people who might be new to radio astronomy, or unfamiliar with it, I always try to emphasize that radio imaging wasn’t always like this, and what a leap forward MeerKAT really is. in terms of its capabilities,” he said. “It has been a real privilege to work over the years with colleagues at SARAO who have built this fantastic telescope.”

Isabella Rammala, a Rhodes/SARAO doctoral student, participated in the imaging and data processing.