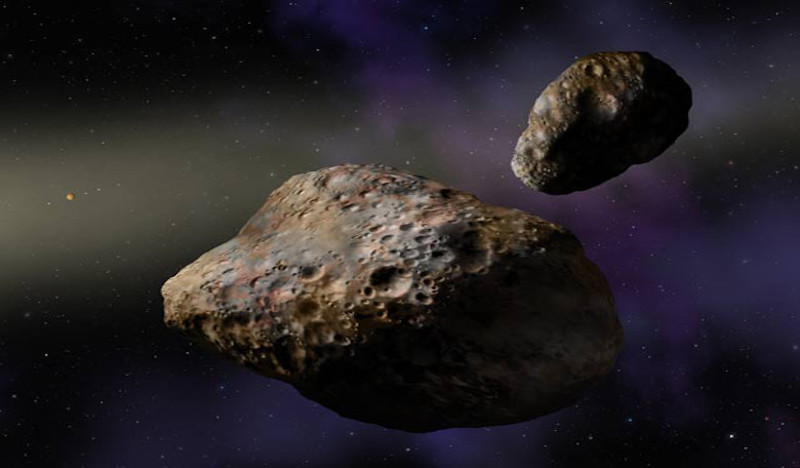 The main asteroid belt between Mars and Jupiter is estimated to contain more than a million objects over a kilometer in diameter. Plus, there are millions of smaller pieces of rock debris in the belt, all swirling around the sun. And, for the most part, these millions of asteroids are quite similar in composition and appearance. But now, with new observations, astronomers say they’ve found two asteroids in the belt that, frankly, shouldn’t be there. These rocky bodies are the two reddest asteroids ever seen in the asteroid belt.

Peer review Astrophysics Journal published the new work on July 26, 2021. The Japan Aerospace Exploration Agency (JAXA) announced the discovery in a press release on July 27. Veteran science writer George Dvorsky featured it in an article in Gizmodo on July 30.

The intriguing discovery was made by astronomer Sunao Hasegawa and his team at the Japan Aerospace Exploration Agency (JAXA). Asteroids as red as these – 203 Pompeja and 269 Justitia – are generally not seen in the asteroid belt. This is because asteroids closer to the sun have little organic matter on their surface, while asteroids further away are covered with complex organic matter. These are believed to be produced from simpler organic compounds like methane and methanol ice.

Other low albedo asteroids in the belt, called D-type asteroids, have long been considered the redder. But it seems that is no longer the case.

For this reason, researchers believe they could be transneptunian objects (TNO), asteroids that inhabit the distant outer solar system beyond Neptune. Their surface composition is very similar to that of the NWT. According to the paper:

These two asteroids have a redder spectral slope than any other D-type body, which are the reddest objects in the asteroid belt. The spectroscopic results suggest the presence of complex organic materials on the surface layer of these asteroids, implying that they could have formed near Neptune.

But then, how did they end up in the main asteroid belt?

Researchers say these objects likely drifted inward when the solar system was still young. It’s not clear exactly why this happened, but it does indicate that the early solar system was a very chaotic place.

The first of many?

Because these objects are so much redder than the typical asteroids in the main belt, they stood out like a sore thumb. It seems likely that they are also more numerous. It could be that many of the main belt asteroids actually originate from further out in the solar system. If so, identifying them could provide valuable clues to the formation of the early solar system.

The main asteroid belt, therefore, can be a mixture of asteroids that formed closer to the sun and others that drifted from elsewhere. The solar system can be a messy place.

203 Pompeja and 269 Justitia are both larger asteroids, so they were included in the observations. The 203 Pompeja has a diameter of 68 miles (110 km) and the 269 Justitia is about half its size.

The surprising discovery of these red asteroids, and possibly more in the future, will provide valuable clues to the formation of the early solar system. It was a chaotic place back then, maybe even more than initially thought.

Bottom line: Astronomers have discovered two asteroids in the asteroid belt between Mars and Jupiter that are much redder than any of their neighbors. Researchers say they likely migrated inland from the far reaches of the solar system.

Source: Discovery of two TNO-type bodies in the asteroid belt

Paul Scott Anderson has a passion for space exploration that began as a child when he watched Carl Sagan’s Cosmos. During his studies, he was known for his passion for space exploration and astronomy. He started his blog The Meridiani Journal in 2005, which was a chronicle of planetary exploration. In 2015, the blog was renamed Planetaria. Although interested in all aspects of space exploration, his main passion is planetary science. In 2011, he started writing about space as a freelance writer, and currently writes for AmericaSpace and Futurism (which is part of Vocal). He has also written for Universe Today and SpaceFlight Insider, and has also appeared in The Mars Quarterly and has written additional articles for the popular iOS Exoplanet app for iPhone and iPad.